Between Ken and Boris: a no-brainer

This is for registered voters in London, England.

How to vote in the London mayoral elections on Thursday (May-day)?  It is not difficult to decide.  It's going to be either Ken Livingstone, the Labour incumbent, or Boris Johnson, the Tory challenger.  Whether you think Livingstone is a good socialist lefty or an arrogant opinionated shifty s**t is completely irrelevant.  It's not a beauty contest; not even a personality contest.  The only question is whether you think it would be a good 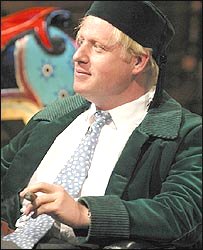 idea to deliver London into the hands of Johnson, a man who has never administered anything; who appears to have difficulty mugging up briefs written for him on even quite straightforward subjects;  whose opinions as reflected in his columns in the right-wing Daily Telegraph, and editorials in the Spectator, are in some cases offensive to decent liberal opinion and in others simply offensive, period;  who is prone to massive errors of judgment from which he seeks to escape by playing the buffoon;  who is alarmingly typical of his background — Eton, and the foppish and reactionary Bullingdon Club at Oxford;  who, because of his ignorance and incompetence, is at the mercy of his minders and fund-raisers, all right-wing Tories, many (including the owners of the London Evening Standard which has run a disgraceful smear campaign against Livingstone) with big business interests which Johnson would almost certainly defer to in his decisions and policies as mayor;  who would have little chance, as a right-wing Tory, of extracting for Londoners the indispensable billions of pounds of public money from a Labour government with an interest in seeing him fail (whereas Livingstone, with a massive personal political following, plus a proven record of progressive success and of independence from his party leadership, has been spectacularly successful in this complex and sophisticated task);  and who (Johnson again) would probably prove equally unsuccessful in extracting public money for London from a Conservative government in the gruesome event of a Conservative victory at a general election during the next mayoral term of office, since he is in hock to his party's bosses, not remotely independent of them.

Like him or loathe him (and there are grounds for either or both), Livingstone by almost universal consent has done an unexpectedly excellent job as mayor.  Some of the cronies who work for him seem to be an unsavoury bunch, but there's no evidence at all that their politics or their advice have had a negative effect on his administration.  The improvements to London's transport system effected by Livingstone have been spectacular, against all odds, and there's more to do, which he shows every sign of doing.  His plans for financing tube modernisation, deliberately frustrated by Gordon Brown as Chancellor of the Exchequer, have turned out to be enlightened and right, as against Brown's which have proved an expensive flop.  His housing policies are practical and progressive.  His influence on policing policies and practices in London has been strikingly positive.  Even the Evening Standard with its squalid defamations has failed to lay a glove on him in policy terms;  and its personal vilifications can be dismissed as completely irrelevant.

So the choice is not hard, even if you regard it as being between two undesirables:  political choices are often a matter of selecting the lesser of two evils, or the least of several.   And there's no escaping it.  If you vote for a third candidate — the Green, for example, or the relatively inoffensive LibDem candidate, the former policeman — and if also you don't give your second preference to Livingstone, you are in effect voting for Johnson for mayor, since you will be withholding your vote from the only candidate who can beat him.  The same applies if you don't vote at all, or if you spoil your ballot paper:  you might just as well vote for Johnson.  There's only one way to help save London from potential disaster on a grand scale, and that's to give your first, or at any rate your second, preference to Livingstone.  Hold your nose while you do it, if you must:  but for London's sake, do it!