Big Brother: Jade and Baz and all that jazz

Well, everyone else seems to be writing about Celebrity Big Brother and Jade Goody and what it all means, so I suppose I had better join in too.

Like some other observers of this extraordinary phenomenon, I have begun to feel a certain reluctant sympathy for Jade since her eviction from the Big House yesterday, eviction decided by 82% of the votes cast by the British public, or at any rate those who had been watching the programme (and those who deny watching it, if only in the last few days, are probably lying).  Of course her behaviour and that of her mother and other supporters towards the beautiful Indian Bollywood actor Shilpa Shetty was deplorable: bullying, foul-mouthed, ignorant, malignant, and with unmistakeably  racist undertones. 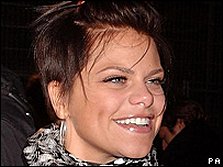 But as the realisation of what she had done began to dawn on her, she displayed first defiance, then alarm, and then a kind of horrified contrition, supported by an attempt, apparently at least half-genuine, to make it up with Ms Shetty and to apologise to her.  Yet her persistent denial that she is a racist person was curiously and perversely persuasive (her father, incidentally, was mixed-race, so Jade is too), and it was impossible not to acknowledge her recovery from her initial tearful terror at the prospect of being evicted — she called it 'rejected' — and having to face an outraged public opinion:  in the end a kind of cockney chippiness won out,  and she came across as defiantly plucky in her self-inflicted misfortune, as well as being shrewd enough to know that she had behaved abominably and now needed to apologise for it.  [Up-date, Sunday 21 Jan.:  A Sun columnist reviewing the newspapers on today's Andrew Marr programme mused that there was now a danger that it was the media who were doing the bullying, Jade becoming their victim — a palpable hit.]

I can't see much point in the argument now raging over whether Jade and her prejudices, ignorance, foul temper, bullying proclivities, and above all her racism — or at any rate her racist language and behaviour — are characteristic of a significant number of Britons, or of working-class Britons, or of our society as a whole (as the always predictable Martin Jacques would have us believe);  whether the mirror that Big Brother allegedly holds up to us all is a faithful reflection of us, warts and all ("Mirror, mirror, on the wall, who is the foulest of us all?"), or whether it is a cracked and distorting fairground mirror that makes an ordinary innocuous observer look like a demon — it's hard to see such a debate reaching a useful or informative conclusion, although so many media and blog commentators are obsessively preoccupied with racism, real and imaginary, that the Jade phenomenon was always bound to focus on that.  We all know that an element of racism lurks in many otherwise blameless people's attitudes, and that this can range from vicious physical attacks and malignant discrimination to relatively harmless (though often hurtful) jokes about other people's ethnicity and cultural differences.  Which point along this spectrum the majority of working-class, middle-class, or all-class Britons occupy is a matter of pure conjecture, although the evidence provided by articulate people from ethnic minorities is not at all reassuring.  End of story.

What's clear, surely, is that Jade is and has always been more victim than villain.  She's shrewd, although no intellectual;  inarticulate and insecure (she obviously felt threatened by the elegant, well-spoken, calm Indian beauty, rather than genuinely despising her); culturally and socially poverty-stricken, although by now extremely rich, thanks entirely to her earlier participation in non-Celebrity Big Brother.  That a 25-year-old young woman from Bermondsey with a powerful personality and probably considerable latent intelligence should have gained so little from the English education system to enable her to take full advantage of her human potential — that terrible cultural impoverishment — does look very much like an indictment, although I'm not sure of whom.

Perhaps more interesting than the hapless Jade is Peter Bazalgette, chairman of Endemol UK (producers of Big Brother) and member of the international group Endemol's Executive Board as Chief Creative Officer, overseeing the 'creation of content across the whole group'.  Bazalgette (rhymes with 'regret', not 'Betty' or even 'Shilpa Shetty') is the great-great-grandson of the 19th century civil engineer Sir Joseph Bazalgette, creator of the then revolutionary London sewage system.  (Jokes on this theme at Bazalgette Jnr.'s expense are well past their sell-by date.)  'Baz' not only presides over Big Brother, celebrity and otherwise: he is also the godfather of 'reality TV' in the UK, going back to 'Millionaire' and beyond.  You can watch and hear his own account of this in a clip (here) in which he talks about his book, Billion Dollar Game, published in 2005.  Here's an extract from the Guardian review of the book:

Big Brother was always more controversial [than its predecessor programme, 'Millionaire']. [Peter] Bazalgette launched the British version, and he gleefully retails some of the condemnation of the critics while noting that they were predominantly male and over 50. "Men," he writes, "have little sympathy for soap operas with emotional storylines." And that points to his vision of Big Brother: not reality television, but candidly "an entertainment, a pantomime". He ties this in with the way the media need a constant fresh supply of celebrities – so they create them from shows such as Big Brother, and we draw closer than ever to Andy Warhol's promise of 15 minutes of fame for everyone.
[Roger Mosey, reviewing 'Billion Dollar Game' by Peter Bazalgette, Guardian, 21 May 2005]

There's something undeniably — well, perhaps not undeniably — refreshing about this frankness in describing a product which attracts such bilious contempt on the part of many middle-class Brits (especially men, apparently).  Bazalgette, with his Cambridge law degree, and his record as a former President of the Cambridge Union and star international debater, deserves to be taken seriously when he discusses the role of Big Brother and similar programmes in our national life, and in the context of widespread national political apathy and disillusion.  His Observer article of 14 May 2006 (available on the Guardian's Comment is Free blog) is full of interesting ideas and proposals (not all of them wholly convincing), prompted by the farcical appearance of the 'Respect' MP, George Galloway, in Celebrity Big Brother last year.

It's easy to dismiss the Big Brother phenomenon as a cynical and meretricious money-spinner for Channel 4, Endemol, their advertisers, and Bazalgette;  of course that's one of the things it is.  There's certainly something distasteful about making a mass entertainment out of the bizarre and often pitiable or embarrassing behaviour of the  'housemates', locked into the Big House and subjected by the programme-makers to a series of artificial stresses and humiliations.  It's often been compared to the once fashionable entertainment of going to watch the inmates of the old Victorian lunatic asylums.  But nobody is ever forced to become a housemate on Big Brother: they are all volunteers, who know what they are letting themselves in for, and are well paid for doing it.  Some, like Jade Goody, go from total obscurity to international celebrity status (and serious wealth) through appearing on the programme.  If they behave disgracefully on camera, as Jade — and at least four other participants in the current programme — did, or embarrassingly, as George Galloway did, perhaps that tells us something about our society, even about ourselves?  The current tsunami of argument and discussion about Jade certainly suggests that the whole thing might have a significance beyond mere entertainment or voyeurism.  If so, which is the offence:  the portrayal on television of real-life racism, bullying, prejudice, ignorance and foul language, or the existence of those failings in our society?  If the latter, then condemnation of Big Brother for displaying a repulsive feature of society is a bit like condemning the witness who filmed the Iraqi hangmen insulting and reviling Saddam Hussein in the last minutes of his life, instead of condemning the hangmen.  Don't shoot the messenger because he brings an unwelcome message!

Having said all that, I shan't go back to watching Celebrity Big Brother now that Jade is out and the controversy over her behaviour towards Shilpa is, or will be, slowly dying down.  There's something distasteful about manipulating people into behaving badly towards each other, and then using them for the entertainment of the more fortunate — even if they did volunteer for it.  And good taste is all, isn't it?

Disclosure:  I know Peter Bazalgette slightly, through serving on the same (somewhat obscure) committee as him.  But I don't think the views expressed above are influenced by that.