It's hard for some of us Europeans to understand how it can be that an American prominent in public life who was for years regarded, with reason, as a leading supporter of the IRA can now be the Chairman of the House of Representatives Homeland Security Committee.  It's even harder to accept that he goes on CNN and the BBC to accuse the Europeans of having no experience or understanding of terrorism.

Congressman Pete King (Republican, New York), has been attacking the European Court of Justice's rejection of the US-EU agreement requiring airlines to supply to the US authorities, within 15 minutes of a plane taking off, 34 pieces of information on every passenger flying to the US, including who's flying, names, addresses and credit card information, how they paid, their health records, what they eat on the flight[1] — and where they're going after they enter the US:

Pete King, a US Congressman who chairs the homeland security committee of the House of Representatives, was outraged that Mr Moraes [member of the European Parliament] doubted the US's word that the data was dealt with responsibly.
"I know how committed the department is to security, to privacy," he said. "For him to say not to trust… I don't know why, I mean, Michael Chertoff (the Homeland Security Secretary) is a former federal judge, a former federal prosecutor and a man of impeccable integrity…
"What we have to do is try to find a way to resolve this. But ultimately if we don't get what information we need, we will have to take what action we think is necessary."  The Times, 30 May 2006

Representative King has explained, in recent CNN and BBC interviews, that the Europeans can't understand the need for this information to be handed over because Europeans have no experience of terrorism in their own countries and no understanding of the security needs of the US following 9/11.  Mr King is also audibly concerned about the al-Qaeda threat from Canada (try to take this seriously, please):

"I think it's a disproportionate number of al-Qaeda in Canada because of their very liberal immigration laws,'' Peter King, a Republican Congressman from New York and chairman of the House Homeland Security Committee, told CNN on June 3. (Bloomberg report)

Rep. King is Chairman of the Homeland Security Committee and also serves on the International Relations Committee.  Congressman King has also been a leader in the ongoing effort to have more Homeland Security funding based on threat analysis and is a strong supporter of the war against international terrorism, both at home and abroad.

Congressman King has good reason to know all about terrorism.  For years he was a leading supporter of Noraid, the American organisation that raised money and, according to the British and Irish governments, provided arms for the IRA, which he vociferously supported.   Rod Liddle, in the Guardian on 12 February 2003, after reading that Mr King had been assailing the French as chronic appeasers over Iraq, wrote:

And then, rather disconcertingly, it suddenly occurred to me that this was the same Pete King who has spent the past 15 years similarly eviscerating the British, or the "Bruddush", for "centuries of oppression" inflicted upon the Irish people. Pete could always be relied upon to say a few words in support of Martin Galvin's evil Noraid organisation, or to wade into some delicate and confusing conundrum of Northern Ireland politics with his size 12 cowboy boots, ready to give succour to the IRA for the sake of securing a few more votes from his Irish and faux-Irish constituents. He always did so with a mixture of brio and crass ignorance. It is the same Pete King, isn't it?

It's worth considering Congressman King's record of activity and comment over Northern Ireland.  Ed Molony, in the New York Sun of 22 June 2005, wrote:

Since the late 1970s, a Long Island congressman, Peter King, has been aligned with one of the most violent terrorist groups in recent European history, defying critics in his own Republican Party and elsewhere, and yet managing to prosper. Now, however, Mr. King and the Irish Republican Army appear to have come to a parting of the ways.

After years spent stoutly defending the IRA and its often bloody methods, Mr. King recently called on the group to disband and bring the seemingly endless Irish peace process to a final and successful conclusion. Frustrated with continued IRA criminality, Mr. King is now in an unaccustomed position: His stance on the IRA is tougher than that of either the British or Irish governments, although it is in lockstep with White House advisers…

Once a vocal and frequent House champion for the IRA's political wing, Sinn Fein, and its leader, Gerry Adams, the 60-year-old, Queens-born Mr. King has said nothing about either on the House floor in years. The politician once called the IRA "the legitimate voice of occupied Ireland," he was banned from the BBC by British censors for his pro-IRA views, and he refused to denounce the IRA when one of its mortar bombs killed nine Northern Irish police officers. But Mr. King is now one of America's most outspoken foes of terrorism.

Six weeks after September 11, 2001, he told WABC radio that the military should use tactical nuclear weapons in Afghanistan if it was believed that Islamic terrorists would deploy chemical weapons on American soil. … In 1980, Mr. D'Amato, then the senator-elect, fulfilled a campaign pledge and went to Belfast on a fact-finding trip, taking Messrs. King and Dillon with him. It was the start of Mr. King's long entanglement with the IRA, and he took to it with the zeal of a convert.

[Following a visit to Ireland in 1980] [h]e forged links with leaders of the IRA and Sinn Fein in Ireland, and in America he hooked up with Irish Northern Aid, known as Noraid, a New York based group that the American, British, and Irish governments often accused of funneling guns and money to the IRA. At a time when the IRA's murder of Lord Mountbatten and its fierce bombing campaign in Britain and Ireland persuaded most American politicians to shun IRA-support groups, Mr. King displayed no such inhibitions. He spoke regularly at Noraid protests and became close to the group's publicity director, the Bronx lawyer Martin Galvin, a figure reviled by the British.

Mr. King's support for the IRA was unequivocal. In 1982, for instance, he told a pro-IRA rally in Nassau County: "We must pledge ourselves to support those brave men and women who this very moment are carrying forth the struggle against British imperialism in the streets of Belfast and Derry."

In the years after the [IRA and INLA prisoners'] hunger strike, Noraid was a major player in New York's Irish-American politics. That was most evident in the yearly election of grand marshal of the St. Patrick's Day parade, when Noraid sympathizers were chosen each year. In 1985, the group threw its weight behind Mr. King. When he won and led the procession in top hat and tails, before an estimated 2 million spectators, the Irish government boycotted the parade. Efforts to persuade Cardinal O'Connor and the city's political establishment to follow suit failed.

After the years of IRA atrocities endured by Irish and British people while Mr Pete King was actively supporting their activities and helping to raise funds for them, not to mention the terrorist attacks by the Red Brigade in Germany and the Basque separatists 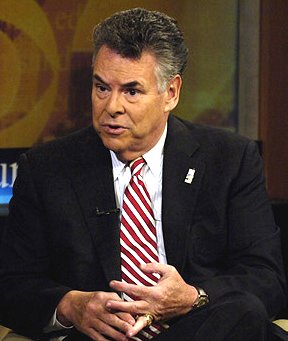 in Spain, and more recently Islamic extremist outrages in a raft of European countries including Britain and Spain, Mr King's reflections on Europeans' lack of experience of terrorism are just a little bit hard to take.  And to make a man with a record like that Chair[man] of the the House of Representatives' principal committee on security and the battle against terrorism surely defies belief.

Someone very well known to me, a survivor of the London blitz in World War II and of many IRA atrocities, who heard Congressman Pete on both CNN and the BBC belittling the Europeans for their lack of experience or understanding of terrorism compared with the Americans, was moved to write a deservedly scathing letter to Mr King.  You can read it here.  If she receives a reply (which seems to me unlikely in the extreme, but you never know), I shall be glad to publish it here with equal prominence.

[1] Up-date, 11 June 06:  I am told (in a private message from an invariably reliable source) that in fact the obligation to tell the CIA about the dietary preferences of air passengers bound for the US was dropped from the Agreement at the last moment, obviously a significant concession to our freedoms.

Further up-date, 5 July 06:  Half-concealed among the comments below is a link to a website, http://www.kingwatch.blogspot.com/ , which monitors the Congressman's activities and how they are viewed in the media and by ordinary, er, folk.