David Laws and the 50% tax rate: worse than calling a cop a pleb?

In her Guardian article today, Polly Toynbee quotes David Laws, now back in government, as saying:

As a liberal, I feel uncomfortable at the idea of the state taking half or more of anyone’s income.

This is obviously meant to justify the acquiescence of the LibDem members of the coalition in the decision last March to reduce the 50% highest marginal rate of tax, instituted by the Labour government in April 2010, to 45%.  Laws’s remark however seems calculated to perpetuate the myth that a taxpayer paying the 50% tax rate is paying half of his total income to the state.  This widespread misconception results from a misunderstanding of the concept of a “marginal” tax rate.  The highest marginal rate of tax, whether 50% or 45%, applies only to that part of the taxpayer’s taxable income which exceeds £150,000 a year.  If your total taxable income in the year (i.e. your income after deduction of various allowances) is £149,999, not a penny of it is taxed at 45% or 50%.   If it’s £150,010, only the last £10 is taxed at 50% (soon to be 45%).  Everything up to £149,999 plus allowances is taxed at exactly the same rates as those paid by someone earning, say, £34,371, the amount at which the rate of 40% begins to apply (check rates for new card applications). 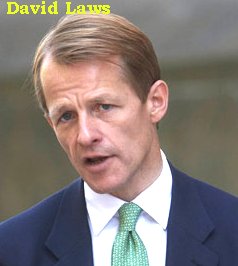 David Laws, as a former LibDem Chief Secretary to the Treasury (admittedly for only 17 days) ought to be able to grasp the meaning of a marginal rate of tax.  Son of a banker, educated at fee-paying schools and with a double first in economics at King’s College Cambridge, for five years a senior investment banker, including a spell as a managing director at Barclays de Zoete Wedd, he’s no financially illiterate pleb.  It’s a reasonable inference that he knows that a marginal tax rate of 50% starting at £150,000 of taxable income can’t mean “the state taking half or more of anyone’s income” (that sly insertion of “or more” making the innuendo even more untruthful).  Either Mr Laws, a LibDem minister in the coalition government, didn’t know that his remarks were seriously misleading, in which case he was wasting his time as an investment banker and senior Treasury minister;  or he did know, in which case….

It’s time that Labour nailed this damaging misunderstanding every time it surfaces.  The case for the very rich to pay substantially more tax as part of their contribution to deficit reduction is unanswerable.  This is one way to raise taxes without squeezing aggregate demand in the economy as a whole, since those earning — or at any rate receiving — more than £150,000 a year (plus tax allowances) have a very low marginal propensity to spend: almost every additional pound of their income goes into savings, often in off-shore accounts.  That the coalition chose to reduce the highest rate of tax on the very rich while actually increasing the tax paid by even the poorest people in the country, VAT, thus significantly reducing aggregate spending power when lack of demand is at the root of the country’s disastrous economic problems, tells us all we need to know about the coalition’s priorities, demonstrating whose interests the Conservative-LibDem government is most anxious to promote.  By comparison with such knowingly misleading spin, calling a copper a pleb is very small beer.  Right, Mr Laws?