We were both 70 this year and it’s apparent that if there is ever going to be a perfect world it won’t be in our lifetime.  Brian’s Old Labour mini-crusades against injustice, illiberalism, mendacious wars, New Labour, become ever more desperate.  Jane, on the other hand, has decided that the torch has passed to a new generation, and wishes them luck.  We just hope that there won’t be any Olympic torches in London in 2012.  We have daft memories of giving receptions, dinners and lunches, of calling on bigwigs and making speeches, in support of Birmingham’s Olympic bid in the ‘80s, clashing with our efforts to help alleviate the Ethiopian famine; later, in support of the Manchester bid when were in Australia—and Sydney was also bidding.  That made us feel pretty foolish.

Our children and grandchildren marked our joint survival to 2004 by arranging lavish celebrations in Brighton:  premier suite at the Old Ship Hotel, vast 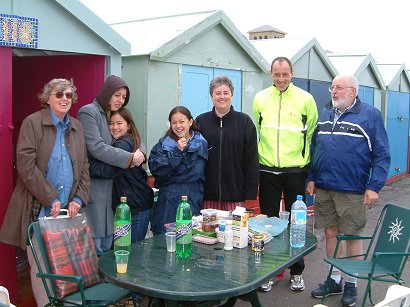 meal at English’s restaurant, and then a champagne picnic brunch at a beach hut in Hove.  Remarkable downpouring of rain and near gale force winds provided our American grandchildren with a splendid example of English stiff upper lip and refusal to allow the weather to dampen enthusiasm for the seaside experience.   We are already looking forward to Golden Wedding celebrations in 2008.

Our older grandchild, 14-year-old  Lily, has calculated that she will be 18 and eligible to vote just one day after the next Presidential election in 2008, so her first Presidential vote will be in 2012; Florri will have to wait until 2016.  Perhaps by that time they’ll be voting for Chelsea Clinton.  Louise is not yet a US citizen but she manned the phones for some of the Kerry campaign in New York.  We all knew though that, despite the sudden lifting of spirits during the Debates, he wasn’t going to win.  He was never the right candidate to ‘report for duty’ in the middle of this manipulated “war” on terror.

Virginia has spent 2004 (year, not pounds) up-grading her Brighton house and garden and winning business for her e-learning company.  Like (apparently) everyone else in gainful employment these days, she works far too hard and for long hours, but seems to enjoy it.  Makes us value our retirement.

Owen is spending a couple of years in San Francisco (Oakland, actually), accompanying Grethe while she does an MBA at the University of California in Berkeley.  He is on unpaid leave from the UK Department for International Development and working for the Washington DC-based Center for Global Development, including work on a project to bring affordable malaria, HIV and other vaccines to developing countries.  So, with two ‘children’ on opposite coasts of the US, we are planning to resume our visits there, probably making our way from Manhattan to California by plane and train.  2004 was the first year since 1999 that we haven’t been to New York at least once, having decided to give the sinuses a rest this year.

We have been enjoying the pleasures of our first full year in Earlsfield, still part of Wandsworth in south-west London, with its nearby railway station, buses, and library, its shops and restaurants and cafés.  We hardly use the car except for leisure travel.  In the spring we visited a series of old and kind friends in Devon and Cornwall; and then we toured southern Ireland by car after a lovely few days staying with Ronnie and June Smartt in Belfast.  It’s well worth visiting Belfast even if you are not fortunate enough to know Ronnie and June.  Later we drove to Tuscany.  We thought before we went that it would probably be our last long drive and we felt the same when we got back.  But it was worth it.  And we went to York, whose Minster is breathtakingly beautiful.  The British Isles still have a lot to offer and there’s still a lot to see, even at 70.

We know that some of you are even older.  Congratulations! It’s not always easy growing old, but, on the whole, it’s worth it; and, as Attlee famously remarked when asked how he felt about being 80, “better than the alternative.“

However old or young you are, we wish you a happy Christmas and a very good 2005 (and bring the troops home).