Assiduous listeners to the BBC's Thought for the Day, five minutes of assorted religiosities to start us off right each morning, and readers of the Guardian's Face to Faith 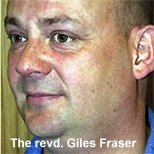 column, will recognise the name and voice of the Revd. Dr Giles Fraser, Vicar of Putney and Oxford philosophy don, and a dead cert to succeed Dr Rowan Williams one day.  I don't share his religious beliefs, but he's a good reliable lefty and small-L liberal and I can't improve on Fraser's charitable comments on the recent utterances of the Archbishop of Canterbury regarding Muslim Shari'a law and the asserted need for English law to reach some kind of accommodation with it.  You can listen to the Revd. Dr Giles's thoughts on the matter here (afrter a brief introduction).  Worth five minutes of anyone's time and much better than most of the contributions to Thought for the Day, apart of course from those by the good vicar himself.

And that is all I have to say on the matter!

Update, 12 Feb 2008:  Well, just a couple of words more, to commend to you another civilised piece by Dr Giles Fraser (here), and a harsher but persuasive piece by Andrew Anthony arguing for the disestablishment of the Church of England (here), both in the Guardian of 12 February 2008.  Mr Anthony's concluding remarks seem sensible:

Much of the grievance members of other religions and denominations currently feel stems from the privilege – state endorsement, parliamentary representation – that Dr Williams's church conspicuously enjoys. Who can deny that the church's special treatment looks increasingly absurd in our multicultural society? Even Dr Williams himself has acknowledged that Britain is not a Christian country in terms of "active churchgoers". Therefore the choice on offer is either to downgrade the Church of England, or upgrade other religions. Dr Williams has made his preference obvious.

He should think again. If he really wants the hateful media off his back, he ought to separate his church from the British state. Then his pronouncements would more properly be a matter only for him and his vanishing congregation.

There's room for argument about the claim that the C of E congregation is 'vanishing', 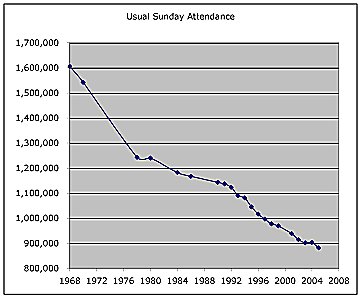 but the secular trend (in the statistical but not the theological sense) is certainly downwards, as this graph for "usual Sunday attendance" from 1968 to 2005 demonstrates.  (The 2006 figures show a further decline; figures for 2007 seem not to be available yet.)