Gordon Brown’s handwriting and spelling: is there a problem?

An interesting epilogue to the MacBride smear e-mails saga:  Gordon Brown’s personal letter of apology to Nadine Dorries, the Tory MP defamed in the e-mail, has been published in full-size facsimile by the Daily Mail in an article of 15 April by Ian Drury: 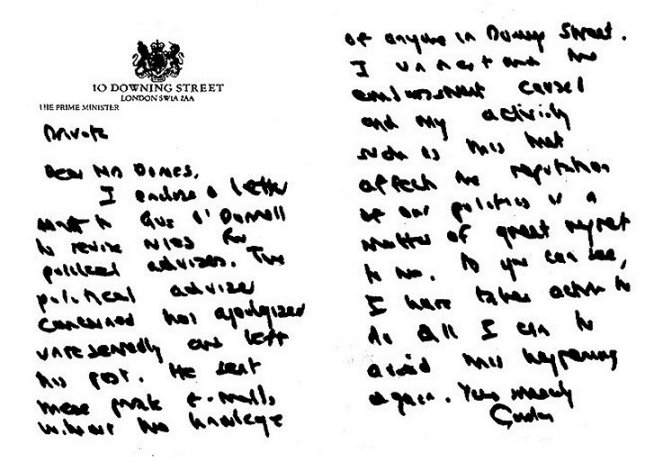 A post by John Sutherland on the Guardian’s Mortarboard blog speculates about whether this remarkable document reveals that our prime minister may be dyslexic. (According to his own mini-biography on the blog, John Sutherland is ‘Lord Northcliffe Professor Emeritus of Modern English Literature at UCL (“emeritus” being Latin for “scrapheap” and “Northcliffe” journalistic shorthand for “you cannot be serious”). He currently teaches at the California Institute of Technology and is the author of twenty-odd books…’)

The professor emeritus points out:

Any teacher, at whatever level, might have experienced a jolt of recognition on looking at Gordon Brown’s cacographic scrawl, drawing the astonished question: “Is the most powerful man in Britain dyslexic – and if so, how on earth did he keep it secret so long?” There were several misspellings in a handwritten note of some 70 words, including the addressee’s surname (“Dorres”), “politcal”, “knowlege”, “embarassment” and “advizer”. There was also the symptomatic cover-up of the dyslexic: the impenetrable handwriting, in which an odd guessed-at-but-wrong spelling can be tactically camouflaged.
It could, of course, have been an attack of stress dyslexia: something that typically afflicts pupils under the pressure of three-hour desk examinations. One spells best when one is relaxed. But it seems more likely that the inability of this most knowledgeable politician to spell “knowledge”or “political” is constitutional, not occasional.

(“Cacographic” is rather good, I think.)

There is also the worrying problem of the left-leaning slope of the prime minister’s handwriting, on which Sutherland recalls that when the handwriting experts were called in to examine the manuscript letter, “there was a lot of guff about the backward slope of the script indicating anal-retentiveness, paranoia, even incipient nervous breakdown.” But he concludes that:

The reason Brown writes as he now does is, one assumes, is that he changed his writing style after the terrible injury he suffered playing rugby in his last year at school. He now angles his script backwards the better to see it with his good eye, which he uses by swivelling his head sharply to the left. It is, however, implausible that his spelling was affected by the accident. But, take heart Britain. … Churchill was also dyslexic.

The Daily Mail article helpfully provided a corrected text of the Dorries letter for those of us who couldn’t decipher the manuscript version:

Part of the explanation for the deficiencies of this short letter must relate to Mr Brown’s rugby accident and the loss of the sight of one eye, as Professor Sutherland suggests. But it’s tempting to guess that another part of the explanation might be the prime minister’s profound aversion to making an apology, causing him to scrawl the letter in extreme haste and mental turmoil. Like the disastrous YouTube clip about MPs’ expenses, this dreadful letter surely ought to have been intercepted by a No. 10 private secretary or adviser with the discreet suggestion that the prime minister might consider re-writing it. Are they all so scared of him that no-one dares to save him from himself? What else are private secretaries for? Or is he surrounded by private secretaries and political advisers who are secretly quite relaxed about their boss’s apparent determination to self-destruct?   Perish the thought.