The 6 March 2008 issue of the New York Review of Books includes a magnificent demolition job in a review of the memoirs of that rascal of the far right, John Bolton, by the veteran retired international public servant, Sir Brian Urquhart.  (Hat-tip: to Dr Lorna Lloyd at Keele, who alerted me to this review in the NYRB.) Earlier this year, Sir Brian recorded an interview lasting nearly an hour for a University of California at Berkeley series of Conversations on International Affairs, all eight parts of which are available on the Berkeley website.  Both the book review and the extended interview are compulsory reading and viewing.  You would never guess from the vigour and forthrightness of both that Brian Urquhart will be 90 next year (2009).

Brian Urquhart is by any reckoning the most distinguished and accomplished British national or international public servant of his generation, perhaps of any generation.  He served in the British army and military intelligence throughout World War II in North Africa and Europe.  In the words of his Wikipedia entry, —

Urquhart is well-known for his attempts to persuade the planners of Operation Market Garden to modify or abort their plans, in light of crucial information obtained from aerial reconnaissance and the Dutch resistance. The episode was described by Cornelius Ryan in his book on “Market Garden”, A Bridge Too Far. In the film version, directed by Richard Attenborough, Urquhart’s character was renamed “Major Fuller”, to avoid confusion with a similarly named British General.

Urquhart was a member of the staff involved in the setting-up of the United Nations in 1945, and has advised every Secretary-General of the United Nations since its inception. His main fields of interest and operation at the UN have been conflict resolution and peacekeeping. Urquhart organized the first peacekeeping force (in Egypt after the Suez crisis). To differentiate the peacekeepers from other soldiers, the UN wanted to have the soldiers wear blue berets. When that turned out to take six weeks to make, Urquhart proposed the characteristic blue helmets, which could be made in a day by painting over regular ones.

As Undersecretary-General, Urquhart’s main functions were the direction of peace-keeping forces in the Middle East and Cyprus, and negotiations in these two areas; amongst others, his contributions also included work on the negotiations relating to a Namibia peace settlement, negotiations in Kashmir, Lebanon and work on peaceful uses for nuclear energy. 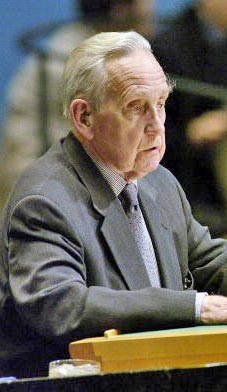 Brian Urquhart retired from the United Nations Secretariat in 1986 (22 years ago!) and since then he has been an indefatigable advocate for liberal international causes, writing books and articles, lecturing and giving countless interviews about all the subjects on which he has absolutely unrivalled expertise: the UN, the role of international law in general and the UN Charter in particular, peace-making and peace-keeping, the role of the super-powers, non-proliferation and disarmament.  His output of authoritative, meticulously documented book reviews and other articles for, especially, the New York Review of Books (listed here) is phenomenal and, happily, continuing.  In the words of one potted biography:

Sir Brian has written several books, including brilliant biographies of Dag Hammarskjöld and Ralph Bunche. He has also written an autobiography, A Life in Peace and War, published by W.W. Norton and Company. His books on decolonization, and more recently on reforming the United Nations system, have projected him into the international limelight of transnational politics. A tireless speaker and activist, Sir Brian [was] deeply involved in the events surrounding the fiftieth UN anniversary. His pieces on the UN volunteer force and the responsibilities of the UN system published in The New York Review of Books in 1993 and 1994 have set the terms of the debate for all future discussions of rethinking the UN system.

Knighted in 1986, Sir Brian has another, rarer distinction: his portrait, by Philip Pearlstein, hangs in the National Portrait Gallery (room 35).

During my time in the late 1970s and early 80s as head of a Foreign & Commonwealth Office department, heavily engaged for several years in the seemingly endless and tortuous negotiations leading eventually to the independence of Namibia under processes arising directly from a UN Security Council resolution, I periodically had some contacts with Brian Urquhart, then UN Under-Secretary-General and one of the two or three most senior members of the UN secretariat.  He was, and no doubt still is, an extraordinarily good listener, ready to consider seriously any ideas and proposals emanating from any quarter without regard to its rank in the hierarchy.  He was incredibly flexible and innovative, not the qualities most commonly found (in those days, anyway) in UN secretariat officials.  He was strikingly courteous, calm and patient.  If he had any defects as an international diplomat, you’d have had a job picking them out.

One more snippet about this many-sided, many-talented man. As his Wikipedia entry quoted earlier relates, during the second world war Brian Urquhart was an officer in the British Airborne Corps of parachute and glider troops. On one of his parachute drops — his last, as it turned out — his chute failed to open and he was very badly injured, not surprisingly. After six months in hospital he was sufficiently recovered to resume his military duties but not to make any more parachute jumps. As the Airborne Corps’s chief intelligence officer it was his job to give advice on possible dangers and risks to the planners of the ill-fated plan for a mass parachute drop to capture three key bridges over the Rhine (one of them at Arnhem) in advance of the Allied armies as they pushed across the Netherlands towards Germany. Urquhart assessed the risks of failure as so high that he felt bound to advise that the project should be abandoned or at least redesigned to reduce the 8 mile distance from the dropping zones to the objective, the bridge. This was not the advice that General Montgomery and the other generals wanted to hear and Urquhart was unceremoniously moved to other duties. He was subsequently proved to have been right and the Arnhem and other landings were a costly failure. In one of his Berkeley interviews conducted a few years ago, Urquhart reflected on the lessons he learned from this traumatic experience:

Well, the thing went very seriously wrong and I then realized what I hadn’t realized before, that these generals and great commanders and politicians who were so admired during the war were actually just like everyone else. They were vain, they were ambitious, they very often made extremely faulty judgments. I had not thought of that before; I had always thought that they were kind of super-people and I must say that the feeling has remained with me for the rest of my life. I never again trusted famous, glamorous leaders to resist vanity and ambition and make the right, mature decision, and get it right.

Recent British and American history alas provides ample confirmation of the rightness of that penetrating conclusion. Historians may not always give enough weight to the role of glamour, vanity and ambition on the part of political and military leaders in driving them on to fatal misjudgements and consequent disasters.

British people should be proud of Sir Brian Urquhart:  those who know about him undoubtedly are.  It’s a pity that he isn’t more widely known and his exceptional record more widely appreciated, although he’s not the kind of person who seeks or would enjoy celebrity status.  It’s not perhaps too late for a Nobel Peace Prize, which would make him better known.  That would be one in the eye for the appalling John Bolton, although several decades too late for the Arnhem generals.

Update (5 January 2009): This post has prompted Alan James, Emeritus Professor of International Relations at Keele University, to send me the following reminiscence, which he has authorised me to quote attributably here:

In the mid 1960s I was commissioned by Alastair Buchan, Director of the Institute for Strategic Studies (as it then was), to write a book on peacekeeping. He and Brian Urquhart were friends, which doubtless helped with introductions when I travelled to the Middle East and Cyprus to see the sort of thing on which the UN was engaged. I also visited North America and there met Brian, he being Under Secretary-General for Special Political Affairs in the UN Secretariat, responsible for special assignments and negotiations and much else. As I maintained my interest in peacekeeping, this was followed over the years by many other meetings. Most of those which took place prior to his retirement were when he was Under Secretary-General for Special Political Affairs, but despite his considerable responsibilities he was invariably ready to see me. Even more valuable – and remarkable – was the fact that he was always exceedingly helpful. He would comment in an acute, frank, unstuffy, and often amusing way on my questions, put me in touch with others who could help, and smooth my way on visits to UN peacekeeping operations. I could not have asked for more.

I might just underline your point that his books and articles are no run-of-the-mill memoirs and analyses. When in 1987 I presented him for an honorary degree, I referred to him not just as a ‘soldier and very distinguished servant of the UN’, but also as a ‘scholar’ – a standing he had achieved alongside his work as an international official.