Honour for a yeoman bed goer

The New Year Honours, rather oddly published on 29 December of the preceding year, are a treasure trove of British idiosyncrasy, but none more so than the list of those awarded the Royal Victorian Medal (RVM), one of the very few gongs in the personal gift of the Queen and her family:

But the best of all has to be:

John Richard Henderson yeoman bed goer, the Queen’s bodyguard of the Yeomen of the Guard

Many intriguing questions are, if not begged, at least prompted by some of these honorands.  Did Ms McInnes give up her job as flower arranger at the little used Palace of Holyrood House on reaching retirement age, or out of boredom, having (presumably) very little to do for around 50 weeks of the year?  Or frustration at having her beautiful and innovative flower arrangements so often unseen by other humans?  How did she while away the rest of the day after she had finished arranging the day's flowers?  Come to that, what made Mr Frowhawk give up his demanding job as "tractor driver/agricultural engineer" at Sandringham?  Reaching retirement age, or a personality disorder brought on by inability to 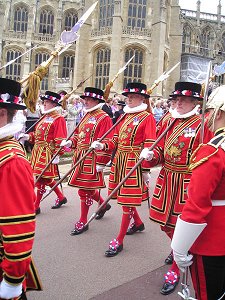 decide whether he was a tractor driver or an agricultural engineer?  We can guess how the gloriously titled 'assistant ravenmaster' at the Tower of London with the wonderful Shakespearian name ("Thomas Trent") earns his keep, and trust that his honour hasn't put the nose of his boss, the chief ravenmaster, out of joint:  perhaps he already has an honour, preferably of slightly higher grade.

But top prize must go to Mr John Richard Henderson, yeoman bed goer, the Queen’s bodyguard of the Yeomen of the Guard.  If that doesn't boggle the imagination, nothing will.  The explanation in Wikipedia ("there are four divisions, First, Second, Third, and Fourth. Each has a Divisional Sergeant Major, Yeoman Bed Goer, Yeoman Bed Hanger, and 13 Yeomen") raises more equally delicious questions than it answers.  No, I didn't make it up:  you couldn't, could you?

Hat-tip: my wife, without whom, etc.