This is a very rough transcript of how I remember Andrew Marr interviewing the Labour leader, Ed Miliband, on the revealingly named “Andrew Marr Show”,  BBC1  television, Sunday 30 September 2012.  I can’t of course vouch for its accuracy.  But for those who missed it, or switched it off after the first three minutes, this may help to give the flavour.

Andrew Marr:  I’m joined now by Ed Miliband as he comes to Manchester for his party conference, at which he’ll have to expect to be judged by not only his party but by the whole country on his claim to be the country’s next prime minister.  He’s widely regarded as a weird pointy-headed nerdy figure, more at home in the university lecture-room discussing ideas than convincing the man in the pub that he’d be better off under a Miliband Labour Government.  Ed Miliband, welcome to the Andrew Marr Show.

AM:  So this is your opportunity, Ed, to reveal the closely guarded secrets of what specific policies we may expect a Miliband government to pursue, if you succeed in the elections in 2015.  We really have no information so far about what you would do about public spending, for example.  Would you cancel the coalition government’s cuts and repeat the familiar Labour policy of reckless spending?

EM:  Well, Andrew, obviously where the coalition’s cuts are failing in their objective of reducing the deficit–

AM:  So you would increase government spending.  I think it’s the first time you’ve admitted that. It means the deficit would also actually increase, doesn’t it?

EM:  No, I’m not saying that at all.  The deficit is actually increasing as a result of the coalition’s cuts, because –

AM:  You still haven’t told us which coalition cuts you would reverse or where the money would come from for all the additional spending.  How can you expect to win the trust of the British people when you won’t come clean about your spending plans?

EM:  Look, it’s still 2-1/2 years until the general election, and it’s impossible at this stage to–

AM:  All right, so we still don’t know.  Now, will you at least tell us whether you would work with the LibDems if there’s a hung parliament after the next elections and Labour is the biggest party?  How can you ask voters to support Labour if you won’t even tell us honestly what you would do if you fail to win an overall majority?  Isn’t that rather arrogant?

EM:  Look, our aim is clear: it’s to win the next election outright, that’s what we’re working for.  Of course if–

AM:  So you won’t answer my question.  Let me put this to you: will it be a condition of a Miliband government working with the LibDems that Nick Clegg is no longer their leader?  I think we’re entitled to know that at least.

EM:  I don’t think it’s for me to tell another party who their–

AM:  Let’s talk about the condition of the Labour party.  It’s widely believed that you and the shadow Chancellor, Ed Balls, have a difficult relationship.  Have you really forgotten the harm that was done to Labour by the terrible relationship between Tony Blair and Gordon Brown?  If so, you must have a very short memory.

EM:  Ed Balls and I work very well and amicably together.  Take the issue of banking reform, which I would really like to tell you– 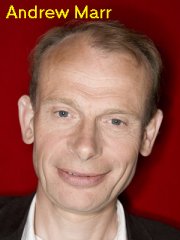 AM:  We’ll come on to that in a minute.  Just now I want to ask you about another thing which you have been very secretive about – the role in the Labour party of your brother, David, who is older than you and more experienced:  how does he feel now about the way you wrecked his hopes of becoming party leader, your own brother?

EM:  Well, you’ll have to ask him how he feels. He knows that I welcome the active role he–

AM:  You’re generally thought to be indecisive.  You were certainly decisive when you decided to run against your own brother for the leadership!  Can you think of any other clear-cut decisions on policy matters that you have taken since you went into politics?

EM:  As leader of the party and Leader of the Opposition, I’m having to make major decisions all–

AM:  So you can’t think of a single one?

EM:  Andrew, I was trying to tell you that–

AM:  All right.  Let’s talk a bit about your private life.  People have been ridiculing you for having yourself photographed with your wife and two small children, arriving in Manchester yesterday for the conference.  Is that what we have to expect now from you:  all folksy family schmaltz and no policies?

EM:  Not at all.  I’m determined that at this conference we’ll be talking in very specific terms about the issues that are making life so difficult at the moment for hard-working–

AM:  So you still haven’t told me in concrete terms what you would like to do about relations with the EU, or Afghanistan, or the trade deficit, or how you would get on with Mitt Romney if he wins the US elections, or really anything at all about international affairs.  For example, now is your chance to tell me in detail how you would propose to bring the violence in Syria to an end if you were prime minister now.

EM:  I’ll be very glad to tell you my position on all those matters, if you’ll give me a chance.  On the crisis in the EU, for example, and especially in the Eurozone, we would give strong support to –

AM:  We’ll come on to that in a moment.  I want to ask you about the banks.  You’ve been quoted as saying that you would point a gun at the head of the banks and threaten to nationalise them if they don’t obey your order to separate their international investment operations, or casino banking as I think you call it, from their ordinary high street banking operations.  Presumably you don’t mind that this would drive all our banks to close down their UK banking operations and move to the United States where they would be more welcome to make a profit and provide badly needed services to the whole financial system?

EM:  That’s a parody of what I have proposed for reform of the banks.  I certainly think that a clear separation–

AM:  That’s exactly what I said you were saying.  How can you–

EM:  Can I finish my point?  A clear separation of investment–

AM:  No, I’m afraid that’s all we’ve got time for.  Thank you very much for coming in, although I don’t think you have really shed much light in this interview on what to expect from an Ed Miliband administration in the unlikely event of anyone who looks like you winning an election.  Ed Miliband, leader of the Labour party.  Now –

AM:  [Turning away from EM to face another camera; EM now out of shot]  Now we’re going to be played out by listening to a very attractive young lady whose recent hit single is currently at No. 788 in the charts and rising fast.  What brought you into your amazingly successful singing career, my dear? …. 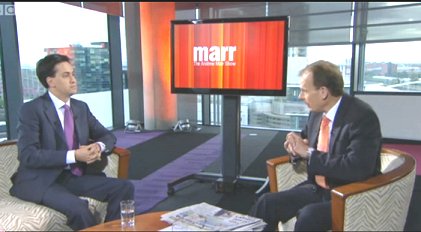