In praise of Australia, the Movie (and Australia)

It’s not very often that an outstandingly good and enjoyable movie gets so many lousy reviews, both public and private, and so many expressions of delight and admiration too. A friend of long standing and impeccable taste wrote in a recent e-mail, for example, about Australia:

We saw ‘Australia’ in Athens but I’m afraid I can’t share your enthusiasm. It had some good moments — e.g. the cattle stampede — but overall we thought it was curiously amateurish — ultra-corny plot, stilted dialogue and surprisingly inept direction; we were disappointed.

By contrast J, who has bionic antennae for the bogus or sub-standard, wrote the other day:

Yesterday we went to see Australia, which we both enjoyed enormously notwithstanding stupid articles by the likes of Germaine Greer.  It is an epic film of the ’40s, 50’s Hollywood variety with Australia’s extraordinary inland scenery providing fair competition for Monument Valley, cattle drives to equal those in any Western, the bombing of Darwin resulting in Gone With The Wind Atlanta scenes and a sentimental story with a happy ending. This isn’t a spoiler: you can tell from the whole spirit of the film that it has to have a happy ending. There were just one or two moments when Nicole Kidman produced a shrill giggle as from her Chanel Number 5 advertisement, ‘I love to Daaaance’ (also directed, like Australia, by Baz Luhrmann). But most of the time she was lovely and not at all like the Botoxed character portrayed by some of the critics. Hugh Jackman is also lovely. Somewhere Over the Rainbow, and the swelling chords of Nimrod, bring a tear to the eye. Baz Luhrmann is true to his generation of Australians in a desperate effort to put Aboriginal culture, problems and solutions in the forefront of any film about Australia. It certainly makes a contrast to the treatment of indigenous peoples in most of the great Hollywood westerns, made of course in a different era. Some might think that Lurhmann defeats his purpose by too much repetition of the old man standing on one leg, a bit of a caricature, but you can’t fault him for trying. At least, unless you’re Germaine Greer, you can’t. 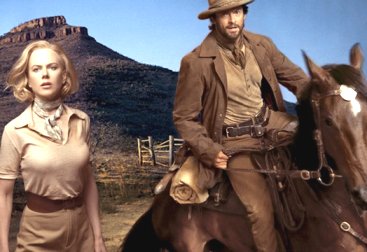 There’s a much more perceptive review or article than Professor Greer’s here, which differs from Germaine Greer’s in spotting that Australia is not a documentary, nor a history, nor a political polemic, nor a naturalistic romantic drama, although it combines elements of all these. As Luhrmann himself says, it’s a cinematic smorgasbord, with a heavy emphasis on the cinematic: the film has enchanting echoes of immediately pre-and post-war Hollywood epics, including most obviously Gone with the Wind and numerous Westerns; of magic, fable and fantasy, drawing explicitly on The Wizard of Oz; and illuminated by familiar Luhrmann directorial signatures, most obvious in Moulin Rouge! – a film which incidentally I disliked, but whose highly individualistic style comes off magnificently, I think, in Australia. As the New York Times review put it, –

Baz Luhrmann’s continent-size epic, “Australia,” isn’t the greatest story ever — it’s several dozen of the greatest stories ever told, “The African Queen,” “Gone With the Wind” and “Once Upon a Time in the West” included. A pastiche of genres and references wrapped up — though, more often than not, whipped up — into one demented and generally diverting horse-galloping, cattle-stampeding, camera-swooping, music-swelling, mood-altering widescreen package, this creation story about modern Australia is a testament to movie love at its most devout, cinematic spectacle at its most extreme, and kitsch as an act of aesthetic communion.

Roger Ebert’s finely balanced review in the Chicago Sun-Times expressed all the right and necessary reservations, but concluded:

“[Gone With The Wind],” for all its faults and racial stereotyping, at least represented a world its makers believed in. “Australia” envisions a world intended largely as fable, and that robs it of some power. Still, what a gorgeous film, what strong performances, what exhilarating images and — yes, what sweeping romantic melodrama. The kind of movie that is a movie, with all that the word promises and implies.

J and I lived and worked for altogether seven years between 1973 and 1994 in Australia, a big fascinating country with a big-hearted, larger-than-life population that deserves to be celebrated by a really big film like Baz Luhrmann’s.   Admittedly I would gladly watch a three-hour movie consisting exclusively of the beautiful Nicole Kidman reading extracts from the Sydney telephone directory; but it’s not only, or mainly, a devotion to that outstanding actress that impels me to urge you to go and see Australia and to judge it for yourself. Just don’t judge it as something it was never meant to be. Go and see Australia, too, with the same proviso.