It’s our fault that the Americans can’t close Guantanamo, apparently

The Chief Legal Adviser to the US State Department, John D Bellinger, says that foreign governments should stop calling for the closure of Guantanamo and instead help 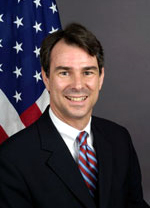 resettle some of the more than 400 prisoners there, according to various press reports, including this from the BBC.

Some of these reports have recalled that the Americans have offered to send the "British residents" (i.e. prisoners who have had permission to live in Britain but are not British residents) back to the UK but that the British government has refused to accept them.  But that is only part of the truth:

The US has offered to return nine British residents detained at Guantanamo Bay, provided they are kept under 24-hour surveillance if set free in the UK, it was reported today. The offer was made in June this year during secret talks in Washington, but was refused by the Government on the grounds that as the men were foreign nationals, they have no legal right to return. Although the men are accused of terrorist involvement, British officials say that there is not enough evidence to justify the level of surveillance demanded by the US and that the strict conditions stipulated are unworkable and unnecessary, according to documents obtained by The Guardian.
They do not pose a sufficient threat," the head of counter-terrorism at the Home Office is quoted as saying by the newspaper. [Times report of 3 October]

There's room for argument about the extent of the British government's responsibility for people who lived in the Uk, not British citizens, who have been kidnapped by the Americans as "enemy combatants" on suspicion of being terrorists and who have fetched up in Guantanamo, detained without charge or trial for years.  But there's no room at all for argument about the illegitimacy of the American attempt to impose extreme conditions (24-hour surveillance!) on their willingness to allow these people to return to the countries where they previously lived, and on the decision by the former host country on whether to have them back.  British ministers are quite right to say, however belatedly, that the Guantanamo régime is unacceptable and that it is the responsibility of the United States government to close it unconditionally.  Other governments have no obligation whatever to help to pull these American chestnuts out of the fire for them.

By the way, the British home office's comment that the Guantanamo prisoners "do not pose a sufficient threat"  to justify subjecting them to 24-hour surveillance is reminiscent of the extraordinary remark by UK police and security sources on the two "terrorist suspects" in Britain who were subjected to harsh control orders but who have absconded, their whereabouts currently unknown to the police, —

Police and security sources maintained that the two are not threats to security in Britain.

If they are not threats to our security, why were they subjected to control orders with the deprivation of liberty that these unconscionable measures impose?  If the former UK residents in Guantanamo don't pose a sufficient threat to warrant 24-hour surveillance if allowed to return to Britain, what on earth are they in Guantanamo for?

To such absurdities and injustices are security authorities and panicky governments reduced when the basic safeguards of due process are sidelined and suspended.