Jerry Springer and the Christian fundamentalists

Religion has taken a battering lately, with the disastrous misadventures of that pair of faithful believers Messrs. Bush and Blair, the murderous activities of various Muslim fundamentalists, the success of the Sikh theatre censors in closing down by violence a play which they didn’t want Birmingham theatre-goers to see, and now the demonstration by tsunami that if there’s a God, he (or she) is either not omnipotent or not benevolent, a logical imperative from which the agonised hand-wringing of the media theologians has offered no escape.

You’d think, wouldn’t you?, that against this backdrop the Christian faithful might show a decent reticence in the face of the BBC’s decision to broadcast on television, late in the evening, an award-winning satirical musical comedy, Jerry Springer – The Opera, which has been running in London’s West End to admiring reviews and audiences since October 2003 after a triumphant run at the National Theatre, following equally successful runs at the Battersea Arts Centre and the Edinburgh Festival (its first working draft was performed in August 2001). Not a bit of it. According to the BBC, “[it] has received more than 15,000 complaints about its decision to air the musical Jerry Springer – The Opera. Campaigners Mediawatch UK have railed against the show going out on BBC Two on Saturday because of the high level of swearing. There have also been thousands of complaints to TV watchdog Ofcom.” Crowds of fundamentalists with banners demonstrated outside the BBC studios demanding cancellation of the broadcast. An article in a publication called ‘UK Christian News’ reported that:

‘A Christian activist group, Christian Voice, run by Stephen Green, is organizing the protests to take place on Friday 7th and Saturday the 8th January. With protests confirmed outside BBC London, BBC Birmingham, BBC Manchester, BBC Plymouth, BBC Glasgow, BBC Cardiff and BBC Norwich, the organizers hope that Christians in the UK will send a clear message to the internationally famed television broadcaster that the program is in no way endorsed by the Christian community [my emphasis].
‘Citing a recent large protest by Sikhs, Green, in a recent email newsletter to Christian Voice supporters says "It is interesting that this story should break a week after four hundred Sikhs felt strongly enough about the play Behzti (Dishonour), which depicted sex abuse and murder in a Sikh temple, to protest outside (and inside) the Birmingham Repertory Theatre. There were some arrests, but you have to admire their willingness to stand up for their religion. Is Almighty God sending Christians a challenge?” ‘

Another article in Christian Today revealed that –

‘The Bishop of Manchester, Rev [sic] Nigel McCoulloch [sic], the Church of England’s leading spokesman on broadcasting said, "Freedom of expression is not the issue here, since the show already runs on the stage. On a publicly-funded service channel, my worry is that this outrageous opera is a major departure from viewers’ current expectations, as it is evidently highly offensive material. In addition, I believe the timing of the Broadcast at 10pm, with a trailer Programme at 9pm on a Saturday evening, is professionally irresponsible. At these late times, many older children may be drawn into watching it."

‘The Rt Reverend emphasised, "I have made my views clear to the BBC and, in the interests of informed discussion, have asked if they might be prepared to let me see a tape prior to broadcast. Sadly, they have refused that request."

‘The Reverend joins a growing mass of 15,000 other complainants, bombarding the Corporation with further Protests.’

(The bishop was reported a few weeks earlier as having “spoken out against shops opening on Sundays after his [Manchester] diocese was named the most Godless in the country.” ‘"The temple-like structures of some supermarkets and shopping malls suggest shopping is a new religion," he wrote.’)

After the television broadcast, the BBC reported that “Hundreds of Christian protesters rallied outside BBC buildings before and during the broadcast on BBC Two. At least 45,000 people contacted the BBC about the show, mainly to complain about swearing and religious themes. 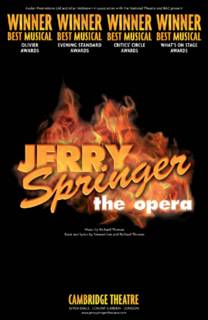 The BBC denied reports that any bosses were in hiding after abusive phone calls, but said unpleasant calls had been received and reported to police.” Around a third of the comments received by the BBC after the broadcast expressed approval of the BBC’s decision to go ahead, and appreciation of the show, the rest voicing varying degrees of outrage and offence. The fact that a high proportion of the protests had clearly been orchestrated through e-mail bombardment and website publicity doesn’t of course invalidate them, although it might suggest some slightly artificial swelling of the numbers.

I thought it was an outstanding production: funny, beautifully acted, danced and sung, with some delicious pastiches in the music ranging from Brecht to Bach, and numerous memorable highlights (who will quickly forget the Ku Klux Klan chorus nimbly tap-dancing in their swirling white robes and pillow-case mask-hats?). There was an underlying moral seriousness, too, which lifted it from the level of the purely provocative: an examination of the moral ambiguities involved in the use of personal relationships and private torments for profitable entertainment while still somehow respecting, not judging, the individuals involved and perhaps even contributing to a resolution of their conflicts. The parody in the first half of the show of the original television programme presided over by the real (British-born) Jerry Springer was splendidly realised, no easy feat when the subject of the parody is itself so often close to self-parody. The portrayal of Adam and Eve, Jesus, Mary, and God, was made acceptable by the fact that all of them were plainly roles played by characters from the TV show in Act I and imagined in a dream. To take offence at these grotesques viewed at so many removes reveals a wholly unreasonable sensitivity (but of course the vast majority of the protesters had not seen the show either in the theatre or on television, and so had no first-hand knowledge of what they were protesting about).

In any case, giving offence can’t justify censorship or suppression of valid material, especially when it is of the quality of this production. Home truths and the provoking of thought will always offend someone. I take deep offence myself at the attempt by the forces of unreason to prevent me from enjoying, and being sharply stimulated by, the best couple of hours of television that I can remember for years.