More news from the asylum

In a recent post here I quoted some examples of news items that read like April Fool's Day spoofs — or, if not spoofs, news which made you wonder which was crazy, you or the rest of the world.  The flow of insanity continues unchecked.  Contributions are welcome.  Here are some more.

John Prescott, our affectionately regarded croquet-playing deputy prime minister, has been staying at the Colorado ranch of an American tycoon who is lobbying for a casino in Britain, matter which Prescott will be involved in deciding.  According to the Sunday Times report, "Prescott denied yesterday that there was any conflict of interest, saying that they had not discussed government business.  Instead, subjects had included the abolition of slavery."  There's no indication as to which of them was for and which against.

A man called the police when he saw a group of youths starting up his moped parked outside his house.  When the youths saw the police car arriving two of them jumped onto the man's moped and rode away.  The owner shouted to the police to follow them to try to retrieve his moped.  The police refused, pointing out (very reasonably, I suppose) that the thieves were not wearing crash helmets: if the police gave chase and the youths fell off and injured themselves as a result, they could sue the police for damages.  Other police force chiefs have agreed that the refusal to chase had been correct.

The estimable Margaret Beckett has let it be known that her reaction on being told by the prime minister that she was to be appointed as Britain's new Foreign Secretary was to say to him: "F*ck!"  Whether this eloquent response conveyed delight, pride, disappointment or sheer panic has not been revealed.

As reported in a Sunday newspaper,  a meeting has been held at a school in Gereshk in Afghanistan in the Taliban-infested area where the Americans have selflessly handed over the reins of power to a British-led NATO contingent. The meeting was called by the local army commander, a British colonel, to win over understandably suspicious local Afghan leaders' hearts and minds and to explain to them the generous contributions being made by Britain to local development projects, few of which have so far materialised.  The colonel was supported by a lady from the British Foreign and Commonwealth Office and another lady from Britain's Department for International Development (DfID).  After each of the three had spoken about their humanitarian mission, one of the elders, an old man with a long white beard, got up and accused the two women of being spies. (Afghan war-lords and other traditional leaders aren't accustomed to being lectured by women, you see, but the British army is helping them to get used to the idea.) The meeting then adjourned to another room to watch a film, specially made for the purpose in Britain, comprising five minutes of the BBC under-water programme Blue Planet, followed by a message from the local Afghan Provincial Governor, followed by five more minutes of whales and dolphins.  (Well, that should do the trick.  Teach the Taliban a lesson, too.)

Detectives in Shrewsbury investigating the murder of two women have said they are investigating whether the place where the bodies were found were being used as a massage parlour.  Detective Superintendent Andy Rowsell, leading the investigation, said: "That's part of the inquiry;  possibly it was being used as a massage parlour.  But until we know what was going on in the premises we are not going to know."  (Here's a clue, Andy: the registered address of the premises is Rachaels Massage.)

According to the Sun newspaper, television viewers in Iran will soon be able to watch the Teletubbies. Psychological warfare?  Better than the other kind, if so.  Reporting this on 2 July, TG-COM splashed the headline: "I Teletubbies sbarcano in Iran:  E Tinky Winky parlerà farsi."  Moral: never underestimate the intellectual prowess of Tinky Winky.

A man called Steve Jago has been arrested in Whitehall for carrying a banner bearing a quotation from George Orwell ("In a time of universal deceit telling the truth is a revolutionary act") and three copies of an article from Vanity Fair headed "Blair's Big Brother Britain".  He has been charged under the Serious Organised Crime and Police Act.  At the police station a police officer stated for the record that he was showing the defendant the Vanity Fair articles which appeared to be 'politically motivated material'.  Mr Jago is to appear in court in September. The report of this surreal but reasonably disturbing event in the Observer of 2 July was written by a co-author of the offending Vanity Fair article, Henry Porter.  (If I were you, Henry, old chap, I would go into hiding.) Bloggers beware:  if you post politically motivated material on your website, the cops will come after you.

All far too true to be good. 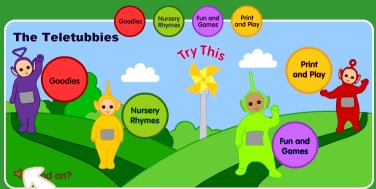