In my earlier post about the rise and fall of Jade Goody (of Celebrity Big Brother notoriety — it no longer much resembles fame), I reluctantly saluted her plucky resilience, the residual defiance that somehow still peeped out from behind the tearful contrition, even after she began to realise the magnitude of the calamity that had befallen her.  In the old days she was horribly coarse, aggressive and bad-tempered, but at least she was bouncy and flamboyant;  now she's utterly crushed.  Who is the bully now?  The media circus turned her from trailer-trash nonentity into rich and successful celebrity almost overnight, and now it has destroyed her.  I defy anyone who watches the short video-clips of Jade's interviews with the News of the World published today not to feel some compassion for this wretched girl.  Jade Goody, like many others, has been betrayed by the society which she grew up in and which has now turned on her.  She has never been helped to express herself, to understand her own feelings, to imagine the effect on others of what she says and the way she behaves, to control her temper, to channel her anger and frustrations into creative or constructive channels, or to gain any insight into the human condition from literature, music or art.  And now she feels the intolerable burden of what appears to her as the hatred of the whole world being dumped on her: rejection and condemnation by the bulk of the media that once profited from flaunting her celebrity, by self-appointed moralists on all five continents, by the pontificating professional anti-racism drum-beaters, even, incredibly, by a brace of political grandees of her own government.   Poor, poor kid. 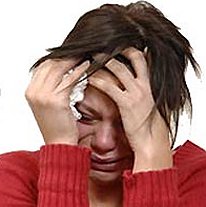 She's probably ruined financially, too.  She has been forced to give to charity both the £50,000 she gets for having been in the Big Brother House and the same amount that she's been paid by the News of the World for the gut-wrenching interview she gave them yesterday, sobbing and bewildered.  She has lost the main money-spinner that she had got from her earlier fame, a wildly popular perfume with her name on it — it's been withdrawn from the shops.  The tabloids and talk-shows and phone-ins will roast her if she tries to sell interviews or articles for money that she's allowed to keep ("profiting from her racist bullying").  In her News of the Screws interviews (as the video clips testify) she appears completely broken, every trace of the old panache beaten out of her.  She says in one interview that she doesn't think any of her money will be left after this and that she won't be able to marry her boy-friend now.  Perhaps she'll bounce back eventually somehow, but as of this evening it doesn't look promising.  More likely the careless media and vox pop that created her have now definitively destroyed her.  Anything for a circulation boost or a spike in the viewing figures that brings in the advertisers, and the hell with the human casualties!

Not an edifying episode.

Update, late 23 January:  Five recent comments on this post, below, turned out to be from the same source, so I have put representative extracts from them into a single comment and deleted the rest.  The extracts are pretty horrifying, confirming some of the suspicions raised by Jade's behaviour and language on Celebrity Big Brother about the kind of quality of life (or lack of it) with which the English education system is equipping many of its products.  Of course we don't know the age of the author in question, nor even whether she, if she is really a she, is 'british' as claimed:  this kind of impoverished language, illiterate with traces of debased rap, is commonplace on American as well as British websites, blogs and forums, as we know.  Perhaps she'll grow out of it.

Meanwhile Jade Goody has reportedly accepted the imaginative invitation of the Indian Tourism Board to visit India as their guest and to see for herself what Indian people are like. She will apparently be accompanied on the visit by a television documentary camera team. It's hard to guess what impression Jade will make on her Indian hosts, and harder still to guess what impression the Indians will make on her. But I will risk a wild guess that the visit will demonstrate that whatever else she might be, and notwithstanding some of the things she undoubtedly said to and about Shilpa Shetty, Jade is not a racist — as some of the orchestrated comments below, all from the same source, seem to be trying to say, with varying degrees of success.  Wishful thinking, probably.