Asked by A. Marr on the Sunday A.M. show on 9 April 2006 whether he would challenge Gordon Brown for the leadership of the Labour Party (and the key to No. 10) when Tony Blair finally steps down, the egregious Alan Milburn (remember him?  don’t confuse him with the other one, wotsisname Byers) replied:

That is a really good question and it deserves a really, really good
answer. The answer is when we have a vacancy. At the moment there isn’t
a vacancy. I think personally it is highly unlikely, but that is a
bridge that I think we all need to cross.

A bridge we all need to cross?    Before we come to it?   Now what can he have meant by that, I wonder.   Rather delphic for a would-be prime minister.   And how to reconcile the two parts of the reply:  [Will you stand for the leadership against Gordon Brown?] "The answer is when we have a vacancy." — i.e., Yes.  But then:  "I think personally it is highly unlikely"  — i.e. probably No:  but that’s only his personal opinion.

One other small mystery.  Not a word of this exchange appears in what purports to be the BBC’s transcript of the Marr-Milburn interview.  Surely my wife and I, and all the newspaper columnists who have reported and commented on it, can’t have imagined that we heard and saw it?

And just in case you’re a Labour Party member and might be tempted to vote for Mr Milburn when we have all crossed that mysterious bridge, here’s a note of how Alan Milburn spoke and voted on key issues since 2001 (From Public Whip and How they Work for You): 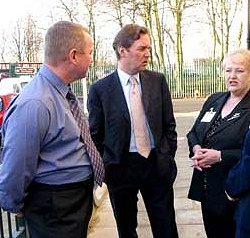 Well, at least he got it right on gay rights.