Britain has belonged to the European Union and its predecessors for the past 42 years. Yet some of our leaders, Conservative and Labour, apparently have little idea about the way it works. Iain Duncan-Smith, the Tory Work and Pensions Secretary, and Douglas Alexander, Labour’s Shadow Foreign Secretary, have both complained, in terms that suggest a surprising ignorance of EU realities, about the possibility of Jean-Claude Juncker, the former prime minister of Luxembourg, becoming President of the European Commission in the face of David Cameron’s ferocious opposition to him.

According to Nicholas Watt in today’s (23 June 2014) Guardian, Mr Duncan-Smith, a former leader of the Conservative party, said yesterday:

If they give Jean-Claude Juncker a job this is like literally [sic] flicking two fingers at the rest of Europe and saying to all the people out there, ‘We know that you voted the way you did but you are wrong and we are just going to show you how wrong you are by carrying on as though nothing happened.’

And Mr Alexander, for Labour, who according to Mr Watt “has instructed Labour MEPs not to support Juncker” [what, even if he’s unanimously nominated for the job by all the EU governments?], spoke in equally revealing terms:

There can be no excuses. David Cameron has a clear mandate from political parties here in the UK – including Labour – to build consensus across Europe for an alternative candidate for president of the commission.

Mr Duncan-Smith seems to think that the majority of the EU electorate has just voted to reject Mr Juncker for the post of Commission President.  In fact, Mr Juncker was the preferred candidate of the EPP, the main centre-right group in the EU parliament, which won the most seats in last month’s election. So if the EU elections are any guide (which is debatable), Mr Juncker has a better claim on the job than anyone else.

It’s also meaningless to suggest, as Mr Alexander seems to have done, that at least the UK voters voted at the European elections in support of Mr Cameron’s opposition to Mr Juncker.  Because of Mr Cameron’s eccentric and ill-judged  decision, before becoming UK prime minister, to pull the UK Conservative party out of the EPP group to which its main natural allies in Europe belong, and to form a new group which he thought could be made more Euro-sceptic, there is now no UK party that belongs to the EPP group, and it was therefore impossible for any UK voter to vote either for or against Mr Juncker for the Commission Presidency.  Where Mr Alexander’s “clear mandate” for Mr Cameron’s opposition to Mr Juncker comes from remains a mystery. If all he means is that he, Ed Miliband and Clegg have all agreed to oppose Juncker and to support Cameron’s reckless campaign against him, that hardly amounts to a ‘mandate’: it’s more of a joint misjudgement.

It’s just as bizarre for Duncan-Smith and Alexander to speak as if the elections to the European parliament effectively equated to elections to the Presidency of the European Commission.  The parallel with elections to the UK parliament, where the leader of the party winning the most seats in the House of Commons will normally become prime minister, is seriously misleading.  In the case of the EU, it’s the European Council of Ministers – i.e. the EU heads of government – who have the duty and right to ‘nominate’ their preferred candidate for the Presidency of the Commission, who is then ‘elected’ – or rejected – by the European parliament.  Of course in deciding whom to nominate to the EU parliament for the Commission Presidency, the EU governments will take account of opinion in the elected EU parliament, the biggest group in which campaigned last month for Mr Juncker as Commission President.  If Mr Cameron somehow persuades his fellow members of the Council of Ministers to nominate a candidate other than Mr Juncker,  the EU parliament might well refuse to elect him or her, and go on rejecting the EU governments’ nominees until they consent to nominate Mr Juncker.  But the idea that in electing Tory, LibDem, Labour or UKIP MEPs to Brussels and Strasberg, British voters were expressing an opinion about Mr Juncker’s – or anyone else’s – suitability for the Commission Presidency is frankly fatuous.  I doubt if as many as 1 percent of UK voters had ever heard of Mr Juncker.

Iain Duncan-Smith and Douglas Alexander might usefully be reminded of two further points. 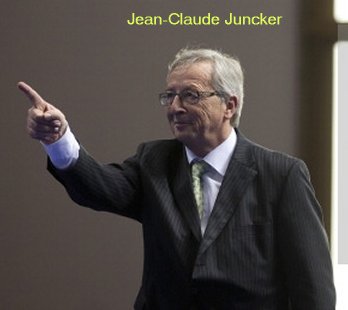 First, last month’s EU elections in the UK can’t by any stretch of the imagination be regarded as an indication of the British people’s views on the best candidate for the Commission Presidency.  No UK party campaigned at those elections for any particular candidate for that post, no UK party putting up candidates for the European parliament belonged to the EPP group which, elsewhere in Europe, was championing Mr Juncker for the job, and since the UK is unrepresented in the EPP group which won the elections, the UK’s MEPs will have little or no influence in the decision of the EU parliament on whether to elect or reject whoever is eventually nominated by the EU governments.  This sorry situation results directly from David Cameron’s decision to pull his party out of the EPP group, ignoring the pleas of a bewildered Mrs Merkel and other European leaders who might otherwise have had some sympathy with Mr Cameron’s problems.

Secondly, our party leaders might be reminded that there is no consensus in Britain about the kind of EU reforms that Mr Cameron and his Euro-sceptic party are demanding.  Just because all three of the main political parties in Britain, and indeed in many other European countries, recognise the need for “reform” of the EU, it doesn’t mean that they agree on which reforms they want.  The UK Tories, for example, want to weaken the power of the EU to regulate safeguards for employees’ work conditions throughout the Union.  They resent this EU power in the name of what they euphemistically refer to as “flexible labour laws”.  Our UK Tories want to be relieved of EU  constraints on their right to make our workers work longer hours, for lower rates of pay, with fewer rights to maternity, paternity and other holidays, and generally in worse conditions, than those in our more enlightened EU partner countries.  We need a promise that this is one of many Cameron ‘reforms’ that Labour will never support.

Nor should Labour support the Tories’ demand for limits to be imposed on the free movement of people within the EU, or for abandonment of the principle that all EU citizens, in whichever EU country they live, work or visit, are equally entitled to  health and other social benefits.  We all favour ‘reform’, as we all favour motherhood, but one party’s reforms are another’s erosion of the basic principles underlying the EU.  The Union, that institution to which we belong, and from which we derive such enormous benefits, is one which many people all over our continent still, despite all the disappointments and disillusionments, find genuinely inspiring.  Labour should never compromise its European credentials in order to try to appease the Euro-sceptics of the Murdoch press and the wilder reaches of the Conservative back benches.  We can leave that doomed attempt at appeasing ignorance and reaction to Mr Cameron and Mr Duncan-Smith.

Our prime minister has embarked on another of his wild gambles.  If he pulls it off and our partner governments are blackmailed into dispensing with Mr Juncker’s services, David Cameron’s and other Tories’ triumphalist gloating will be hard to endure, and Britain will incur the odium of widespread opinion throughout the EU for depriving them of their favourite candidate.  If he fails, Britain will have to cope for five years or more with a powerful President of the Commission who’ll bear an entirely understandable grudge against all three of the UK’s political parties for having tried so hard, for so little reason, to prevent his selection for the job.  It’s a lose-lose situation, as usual.

Footnote (27 June 2014): An abbreviated version of this post has been published by LabourList: please see http://labourlist.org/2014/06/on-foolishly-trying-to-junk-mr-juncker/.  It has attracted some very interesting comments there, to some of which I have tried to respond with a number of additional points on various aspects of the issue.