On the November 2007 Australian elections (2)

As promised in the previous post, here's another comment on last week's Australian elections, this time by John Greenwell, a shrewd and experienced Australian observer, who, like the author of the earlier commentary, has seen Australian government from close up: 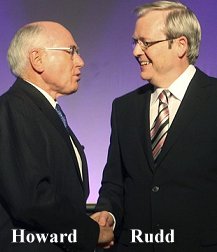 The Labor victory in the Australian elections at the weekend was not unexpected, but the scale of it was. Labor, under Kevin Rudd, gained 23 seats, the Liberals lost 27, the Nationals lost 10 with an overall swing to Labor of 6% — the Prime Minister, John Howard, lost his own seat in Bennelong.

Such a result requires explanation. The Australian economy is booming—indeed such problems as it has are those of excess rather than recession. Unemployment is at record lows. There is no foreseeable end to the minerals boom generated by the demand from China upon which the vibrancy of the economy has depended. No Australian government in recent times has been rejected electorally without previously presiding over a recession.

The following are my views—although I hasten to say that the result surprised me. Everybody knew there would be a substantial swing to Labor, but it seemed that it might not quite get the 16 seats it needed to capture government.

One general reason was the “It's Time” factor. Plainly after 11 years many in the community were simply tired of the same old government leaders. While this was a factor, it was very much less than self-sufficient.  In 2004, after nine years in office, the Coalition was not merely re-elected but returned with an increased majority. It is clear, I think, that the decisive considerations must have occurred subsequently—although on top of the “It's Time” factor, which would not on its own have resulted in the government being ousted.

It does seem that two groups who had hitherto supported the government became disillusioned for different reasons.

(a)   The first were the “Howard’s Battlers”, blue-collar workers, formerly automatic Labor supporters whom Howard captured in 1996 and held on to because of  the economic prosperity which they enjoyed.

There are two reasons why this group turned against him: ‘Work Choices’ and interest rates. ‘Work Choices’ refers to legislation introduced in the last Parliament without having been mentioned at the election which preceded it, and to which Howard was ideologically committed . This legislation would – in its pristine form – have stripped workers of any kind of  centralised controls or any Union bargaining power in industrial relations. This was fiercely opposed by the Unions and feared by many workers. Howard made certain minor retreats legislatively but not enough to modify worker concern.

The other reason was increasing interest rates, which have risen six times since the last election. Interest rates are fixed independently by the Reserve Bank, but Howard was foolish enough, at the last election, to promise that interest rates would be contained. The importance of this is that many of the ‘aspirational’ voters (Howard’s Battlers) who had benefited economically had borrowed heavily when interest rates were low. They were angry at having been misled.

(b)   The second group are more amorphous – or at least the issues motivating them are, with one exception, diverse. This group who voted for Howard in the past were basically conservative and became increasingly concerned that that many old values were being dismantled by a government which seemed to be increasingly modelled on the American Republican Party: Iraq—the deception involved; David Hicks and Guantanamo Bay; detention centres for immigrants, and Immigration generally; the Tampa affair and the deception related to it ; the antiterrorist legislation; the Haneef case; government expenditure on Coalition political advertising; concealement of political donations and, above all, the abuse of Coalition power in the Senate — in one instance an Act of 500 pages was pushed through in 24 hours.

As you can see, this is a miscellany of issues which affected many conservatives who may have voted for the Coalition in the past.  Perhaps the following quotations, the first from a letter in today’s Sydney Morning Herald and the second from the former ALP Prime Minister Paul Keating, may explain this attitude:

“… decency and the fair go have returned to Australian political life”

“this is not just a victory for Labor but also for Liberals like Malcolm Fraser, Petro Georgiou and Judi Moylan who stood out against the pernicious erosion of decent standards in our public affairs.”

(c)   But overarching these groups and the issues referred to above was climate change. Howard had dragged his feet for 11 years on this and along with the United States had refused to sign Kyoto. In the last few months he has tried to play ‘catch-up', but he never appeared to the electorate to have his heart in it. The very substantial ‘green’ vote – which benefited Labor with preferences – was an important factor in the Government’s loss.

The above only purports to be an analysis of why the Coalition lost the election. I have said nothing about the prospects of a Rudd government. That would be a separate exercise. I do not however react to the new Labor Government with a Wordsworthian ‘bliss was it in that dawn to be alive’; but, very much for the reasons mentioned in (b) above, it is a relief.

John Greenwell has been Deputy President of the Australian Law Reform Commission; a senior officer in the Australian Attorney General's Department; head of Government and Legal Affairs in the decolonisation of Papua New Guinea; and barrister at the Victorian Bar.  He is active in Amnesty International (see http://203.147.147.39/airesources/newsletterOctNov2002/worldnews.html
and
http://clearharmony.net/articles/200208/6199.html).

Further comments (especially by Australians) on this striking Australian election result are very welcome.  In particular, who sees a parallel with 1 May 1997 in Britain, where do the two experiences differ, and will the eventual outcome be similar (heaven forbid!)?