Quibbling with the Guardian again

It's the summer silly season still, I know, and the more literate Guardian subeditors are doubtless soaking up the vitamin D on obscure north African beaches, but even so…

Guardian editorial, 2 September 07:
"…the media surveillance meted out to Kate Middleton when she looked like she was set on a path towards Diana's one-time title of Princess of Wales."

Guardian story about Vaclav Havel's wife, 30 August:
"…it now looks like the wait for a fresh Havel work will be further prolonged…"

[Guardian Style Guide:
"like/as if
never use the former to mean the latter: "it looks as if he's finished" not "it looks like he's finished"]
Never?  Well, hardly ever….

Guardian 'Face to Faith', 2 September:
"If [the church]…on social issues, … wishes to be out-of-step with public opinion, that is its decision."  Who put those hyphens in?

Guardian editorial, 30 August:
Fortunately, at least over the longer-term…"  There it is again.  "The longer term" as a noun doesn't even sound the same as "a longer-term solution" used adjectivally: the stress is different, just as 'staying awake for a long time' sounds and should look different from 'a long-time friend'.  To insert a hyphen in the noun indicates cloth ears as well as defective eyes.

Guardian third leader "In praise of statues", 30 August:
"'We half-joked that one day a statue of a black person would be erected here,' Nelson Mandela said yesterday, as he unveiled his larger-than-life image in bronze before a crowd in Parliament Square… He [Nelson Mandela] joins Emmeline Pankhurst, Mahatma Ghandi [sic] and John Wilkes on London's streets…"
Apart from not being able to spell Gandhi's name, the writer of this seems to have 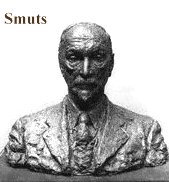 missed the point of Mandela's remark about dreaming of a statue of a black person being erected in Parliament Square:  it was the irony of a black South African joining Field-Marshal Smuts in the square that had amused Mandela.  But I suppose the author of this piece was too young to have any idea who Smuts was.  (Hugh Muir, though, writing on another page of the same edition, got it right.)

Guardian third leader "In praise of statues", 30 August:
"None of them stand out as much as the 31 naked figures…."  Not one 'stand' out?

I know, I know.  Newspapers have to work at a feverish pace to publish a huge amount of original text every few hours;  some mistakes are inevitable.  The Guardian, contrary to legend, makes fewer of them than most of its contemporaries.  Its standards are high, and it's a compliment to the newspaper to point out some of the occasions on which it has erred.  That's my story, anyway, and I'm sticking to it.