Saddam: the obscenity of a hanging

The death sentence pronounced yesterday on Saddam Hussein is just the latest chapter in the obscene and pre-ordained process leading to the judicial murder of a tyrant.  Few can feel pity for a man who has committed as many vile crimes as Saddam Hussein.  Having unfortunately been captured alive, he clearly must be held to account for his murderous acts, and if convicted in a fair and impartial trial, he should be punished, ideally by exile in obscurity to some remote spot for the rest of his days.  Unfortunately none of that is happening.  His show trial, funded and stage-managed by the Americans, has been a chaotic shambles, with judges under pressure and resigning or being dismissed, defence lawyers murdered or resigning under the pressures, shouting matches, political harangues from both sides, and television cameras and microphones emphasising the status of the proceedings as mass entertainment.  At yesterday's climax Saddam was informed of his death sentence before he was told the verdict:  indeed, it's not clear whether the court bothered to deliver a verdict at all. 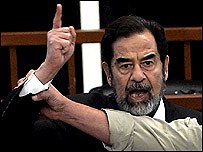 As Geoffrey Robertson QC pointed out on BBC radio this morning, the crimes of which Saddam has (presumably) been convicted, and for which he has certainly been sentenced to die, are literally 'crimes against humanity', not merely crimes against the Iraqi people.  But American insistence on handing their captive over to the Iraqis for trial and execution has deprived 'humanity' of its right to try this man in a properly constituted international court.  Why?  Because it would have been impossible to recruit internationally respected judges for an international court empowered to impose the death penalty.  Few Americans, accustomed to the leisurely judicial killing of hundreds of their fellow-citizens (and others) in American jails — now the only western democracy to practise this grisly ritual — seem to understand the revulsion felt by millions of people around the world at the idea of cold-blooded killing as an act of a civilised state.  The result has been actually to evoke some reluctant admiration of Saddam's defiance in his court cage, his refusal to plead for mercy or forgiveness in what he must know are the last weeks of his life.

There are other indecent aspects to this ghastly ritual.  As Sir Max Hastings says with brutal irony in a powerful article in today's Guardian,

To justify hanging Saddam, Bush and Blair needed moral ascendancy, which they have forfeited. His execution will appear to be merely another dirty deed in the endless succession that have taken place in Iraq since 2003, backed by our bayonets. Now the president will preside over a hanging that will be as much his handiwork as if he pulled the lever, with Blair performing the usual associated functions – attaching the hood, tightening the knot and otherwise making himself useful. In Texas this sort of thing is no big deal. But in Britain we have got out of the habit. Blair may need coaching.

Hastings also mentions the suspicion, whether or not misplaced, that the Americans want Saddam dead before 'Chemical Ali' goes on trial, for fear that if still alive Saddam could be called as a defence witness to the extent of American and other western collaboration with Saddam's régime during the period before the first Gulf war.  Even if such a suspicion has no basis in fact, its existence is another reason for a feeling of the utmost discomfort over the whole ugly process.

Not only will this execution constitute a gross obscenity:  it will be another act of political folly, likely to cost many more lives than those of Saddam and his two co-defendants also sentenced to be hanged.  Nothing could be more divisive than to kill at leisure the former champion of the Sunni community which is now the main source of the blood-letting and sectarian violence, at the very time when what Iraq manifestly needs is acts of reconciliation and unity.  Of course it's no doubt true that a large majority of Iraqis want Saddam hanged, but this can't in practice be their decision alone:  the Americans control the country (to the extent that anyone does), responsible with the British and a few others for creating the situation in which a recognised head of state, however tyrannical and murderous, has been illegally overthrown by external military invasion in defiance of the rule of international law, and the Americans, apparently with British acquiescence, have taken the key decisions on Saddam's fate and the manner of it.  In these circumstances, it is the purest hypocrisy for our ministers to go on television to scold those in this country who wish them to represent to the Americans and to the Iraqi authorities the widespread sentiment of revulsion among informed opinion in Britain at yesterday's tragi-farce and to appeal for humanity and political sanity to be allowed to prevail over victors' 'justice'.  Our ministers describe any such representations as unwarranted 'intervention' in Iraq's internal affairs, yet they are ready enough in other cases to pronounce scalding moral judgements on other countries' perceived shortcomings.  Once again our ministers' blind attachment to a reactionary and brutal American administration ("their country, right or wrong"), manifests itself as moral cowardice and complicity in political folly.  The price of the Iraqi catastrophe just goes on rising.

Update, 8 Nov 06:  Hat-tip to David Tothill for sending me Robert Fisk's savage piece on this subject from the Canberra [? Times] of 7 November (it seems to have started life in the Independent): a must-read.

Update, 10 Nov 06:  Also an excellent piece from the Melbourne Age of 8 November by Gwynne Dyer, which seems to me to say all that needs to be said on this squalid subject.