The Day War Broke Out

Never, or rarely, one to shirk a challenge, especially when it's accompanied by flattery, I'm trying to scrape the barrel of my memory to reconstruct what I was doing on 20 March 2003, The Day War Broke Out (the catch-phrase, I should explain for the benefit of younger readers, of the sublime radio comedian Rob Wilton during the second world war).

The challenge and the compliment have been launched at me by that admirable blogger, Ministry of Truth, in a post that passes on a killer meme:

Bloody hell, I’ve been meme’d not once, not twice but three times in a matter of days – twice as a ‘thogger’ (Thinking Blogger, apparently) by Paul Linford and DK, and once by Bob Piper who, courtesy of Tim Ireland, wants to know if I can remember what I was doing four years ago when the invasion of the Iraq was launched.

The answer to the latter is ‘buggered if I know’ – probably shaking my head ruefully in anticipation  of the complete screw up to come, as for the former, it seems I’m required to nominate five other ‘thoggers’, which is rather more difficult than you might think as many of the best out there (Mr Eugenides, Jim Bliss, Chicken Yoghurt, Chris Dillow et al) have already got multiple nominations – but none the less I’ll give it a go and nominate the Yorkshire Ranter and UK Today for starters, add Brian Barder, whose ephems are a must-read, and express some small measure of amazement at finding that neither Obsolete or Phil Edwards have been tagged as yet.

Leaving aside the 'thogger' label — not sure what to make of that — I have to report that 20 March 2003 was a pretty ordinary day back at Ephems House apart from what was going on in Iraq.  J and I watched the 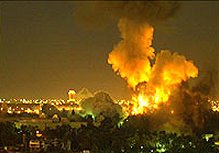 unforgettable live television coverage of the first American and British attacks on Baghdad, brazenly labelled by the confident neo-cons as intended to produce Shock and Awe, as huge explosions lit up the Baghdad skyline, with flames and smoke rising lazily from them.  We watched in unfeigned horror and disgust, shaking our heads in the shameful knowledge that this was being done in our name, by the Labour government which, back in 1997, we had enthusiastically helped to get elected.  I had followed with mounting incredulity in the preceding weeks the increasingly desperate attempts of the UK delegation in the UN Security Council to get that elusive 'second resolution' authorising the use of force, attempts that continued long after it had become obvious that a substantial majority of the members of the Council were firmly opposed to the use of force at that time.  I had followed with increasing indignation, especially as someone who had once been a middle-ranking delegate to the United Nations during four exhilarating and frustrating years, Tony Blair's fluctuating and mutually contradictory public statements about the purposes of the forthcoming attack on Iraq and his unqualified undertakings not to take Britain into an Iraq war without express UN authority save in defined hypothetical circumstances which never in fact arose:  on 20 March we watched the murderous evidence that our prime minister, a Labour prime minister, had dishonoured that undertaking.    (Weeks later I put some of that damning evidence on my website and I have never understood why it has not been quoted back at Mr Blair every day of every week of every month in every media organ that cares about putting these things on the record.)  I remember believing that they would soon find evidence of WMD and that they would then crow that the whole enterprise was thereby justified, although of course the discovery would do no such thing.  I remember thinking that this must be Britain's most shameful hour since Suez in 1956,  when the Labour Party had led the nation's opposition to Eden's defiance of the United Nations and of international law:  Law Not War, we had chanted then as we shuffled through the streets.  Now, nearly half a century later, watching murder live on television, I felt physically sick.  (A few months later, that November, during George W Bush's state visit to Britain, I was on another protest march against another illegal act of aggression and against the two political leaders who bore, and bear, the main criminal responsibility for it: it was the biggest protest march and demonstration on a weekday that London had ever seen.)

But there were major personal distractions on that grim March day in 2003 which explain, if not excuse, my failure to help others to raise the roof in protest at what was being done in the days and weeks that followed.  We were in the throes of complex negotiations and haggling to sell our house and buy another, smaller one, something that came to fruition only the following July.  Four days later, on the 24th, we were to fly to New York to visit our daughter and granddaughters, and despite a lifetime spent in airports and on aeroplanes it still takes me a good four days to pack for even the shortest of expeditions; and we were away without internet access for a crucial fortnight or so.  Perhaps most frustrating at such a time, my computer had developed a bug which prevented me from uploading new material to my website:  I did manage an Ephems post in April about elections in Zimbabwe but it was only in mid-May that everything was working again (as commemorated here).   So we watched and grieved at the death of Iraq and of Britain's honour, but selling the house and battling with the computer and going off to New York absorbed a good deal of our energies too.

So the challenging finger of the rolling meme now points at —

Not sure if there's a crafty hi-tech way of telling them of their duties (by tagging them? what does that mean?) so I'll have to e-mail them.  Should be some good responses by this literate crew of, er, thoggers.  Sorry, chaps.