The illegal Kosovo war and the Genocide Convention

A friend has recently been at a conference addressed by the inimitable Jamie Shea, ingenious (and disingenuous) spokesman for NATO during the illegal, unnecessary, wholly unsuccessful and fraudulently justified NATO attack on Yugoslavia over Kosovo in 1999 (chapter and verse for that characterisation of the dry run for Iraq can be found here).  Unfortunately none of the conference participants tackled Shea, now occupying the key position in NATO of Director of Policy Planning in the Private Office of the Secretary General, on his bravura defence of the indefensible in 1999.  My friend however challenged my views on Kosovo by putting to me the question: "How does the [il]legality under international law of the use of force without the UN Security Council's approval conflict with our obligation to intervene in case of genocide?"
In case anyone else is troubled by the same uncertainty, here's my non-lawyer's reply:
The simple answer to your not-so-simple question is that it doesn't.  Article 1 of the Genocide Convention —

The Contracting Parties confirm that genocide, whether committed in time of peace or in time of war, is a crime under international law which they undertake to prevent and to punish

— is amplified and supplemented, not contradicted, by the Articles that follow, requiring states to legislate, take powers to punish guilty individuals, ensure that genocide is not legally defined as a political crime exempting perpetrators from extradition, etc.,  and then specifying how any international action against genocide is to be taken, in Article 8:

(which incidentally is permissive — 'may' — not mandatory — 'shall').

Thus "the obligation to intervene" (not a word used anywhere in the Convention) is not an obligation as such, but an option, and the option must obviously be interpreted in a way that is in conformity with the UN Charter, which is specifically mentioned.

Two other points that might have got our old pal Jamie into a spot of difficulty, had he been asked about Kosovo and the Genocide Convention:

1.  Even if there was a conflict [which there isn't] between the obligations imposed by the Genocide Convention and the UN Charter respectively, Article 103 of the Charter makes it crystal clear that the Charter obligation would prevail.

2. However badly the Serbs were behaving in Kosovo before the NATO attack on Yugoslavia, nothing they were doing came anywhere near the definition of 'genocide' in Article 2 of the Convention.  Virtually all the acts of brutality against the Kosovo Albanians committed by the Serbs before the NATO bombing began were reactions, often culpably disproportionate, to acts of violence by the KLA which (however much you sympathise with the Kosovo Albanians) fit any conceivable definition of 'terrorism' like a glove.  There's no evidence of any intention on the part of the Serbs to eliminate physically the entire Albanian population of Kosovo — anyway a numerical impossibility, even for the Serbs — nor even to drive them out of the province, which they only started doing after the NATO attack on Yugoslavia began.

The Genocide convention imposes no obligation that could possibly override the plain requirement under international law to resort to the use of force only if and when the Security Council gives its authority.  NATO never even bothered to ask for the Council's authority, on the surreal grounds that the Council would have refused to give it, just as it refused to give it over Iraq.  In both cases the majority of the Council was right, and the enforcers (mainly the US and UK) utterly and indefensibly wrong.
(That will teach you to help me up onto one of my favourite hobby-horses!) 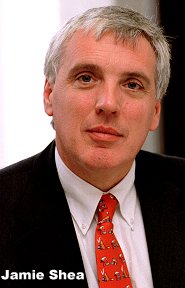 It would be interesting to know how he answers penetrating questions from his students about the illegality of the Kosovo war, its failure to achieve any single one of its various proclaimed objectives, the fraudulent character of the Rambouillet conference which preceded the NATO attack, the failure even to seek UN authority for the use of force (still more the failure to obtain it), and the appalling incompetence of the NATO bombing (hitting refugee convoys, the Chinese embassy, television studios, bridges and power stations, as well as killing thousands of innocent civilians, all to no possible purpose).  Perhaps 1999 is too long ago for Mr Shea's students to know of these crimes and blunders;  they have all probably swallowed, without chewing, the now conventional wisdom according to which Bush's and Blair's Iraq may have been a dreadful mistake, but Clinton's and Blair's Kosovo was a stunning and legitimate success.  But Mr Jamie Shea was only doing his job, and one has to admit that he did it spectacularly well, as no doubt he still does.