Reactions to the criminal kidnapping of the fifteen British sailors and marines by the Iranians in Iraqi waters of the Gulf have produced interestingly varied reactions here on the part of both personal friends and the media commentators.  These have been divided roughly into two groups: the romantics, hungry for glory and heroism — dulce et decorum est pro patria mori;  and the more down-to-earth, the pragmatists, who are simply happy that the 14 men and one woman were released fairly quickly, and that no-one got hurt.  Many of us feel strongly that we have no business to be deploying our naval or military forces in and around Iraq and that those who illegally attacked and occupied Iraq in the first place should be the last people on earth to be acting now under UN resolutions and at the request of the Iraqi government as peacekeepers, naval patrollers or Customs officers.  But the fact is that we're there, legally, and doing a legal and necessary job.  Those who tell us to understand why the Iraqis hate us because of the century of British oppression and intervention against them, as well as because of 2003, come dangerously close to condoning the action of a deeply unpleasant Iranian régime in kidnapping a group of young Britons going about their lawful business:  taking them prisoner and grievously mistreating them:  and repeatedly lying to justify the crime they committed.  Implicitly condoning all that reveals real moral bankruptcy.

It was only to be expected that the cavalry charge of the romantics would be led by Andrew Roberts, the right-wing historian, brandishing his sabre in the Sunday Times of April 8, 2007:

Few of us can guess at the terror involved in being handcuffed, blindfolded, put in solitary confinement and told that confession would mean "liberty" whereas refusal would entail seven years in an Iranian jail. "I really felt we were goingto die," said one marine,though his officer realised that instead of a mock execution the Iranians were only playing with their weapons. Yet it all comes down to training.  With proper preparation for such hardships – in what is, after all, the most dangerous theatre of operations on the globe – the captives ought never to have given the Iranians what they wanted in the way of propaganda. … why have our troops not been trained properly in how to resist tough interrogation techniques?

And what on earth does the great historian imagine training would have achieved?  Heroic deaths under torture, posthumous medals for gallantry, proud bereaved parents and widows (one widower)?  Chuck it, Roberts!  And what's all that about "the most dangerous theatre of operations"?  Does Mr Roberts think we are at war with Iran, or with anyone else on or near the Gulf, or indeed with anyone else at all?  The 'war on terror' is not a war but a badly misleading metaphor.

Max Hastings in the Daily Mail also gets carried away by his soldierly enthusiasm for pointless displays of heroism:

"The prisoners' public demeanour was pitiful, and sorely damaging to the image of Britain's armed forces."

What rubbish!  Disappointing, too, coming from the usually perceptive and informative Sir Max.

The pragmatists are represented, among others, by Andrew Sullivan, also in the Sunday Times:

"The captives — subjected to physical threats — had little choice but to cooperate minimally with their captors. …. I don't feel of a mood to condemn sailors and marines held captive by the Revolutionary Guards of an unstable theocracy…. According to them, they were subjected to blindfolding, mock executions, stripped and told they were in line for up to seven years in an Iranian jail.  I don't know what I'd do in those circumstances. [Well, I know what I would do!  — BLB]   And yes, a lone boat of lightly armed sailors deciding to precipitate a full-scale war between the West and Iran might not have seemed the best idea at the time.  In my book, they get a pass.

In mine, too.  Thank goodness they weren't heavily armed!  If so they might have been tempted to start shooting at the kidnappers.  Much good that would have done.

Will Hutton in the Observer, also sensible:

After a little bit of predictable grand-standing and muscleman talk, Blair was evidently persuaded to pipe down and let the diplomats handle it, which they duly did, without blood being spilled.

Unfortunately our Ministry of Defence has idiotically spoiled an otherwise good record on all this by announcing that the Fifteen will be allowed to sell their stories to the media (and apparently also to keep the resulting loot), a decision they will come to regret as future generations of servicemen and servicewomen who suffer disagreeable experiences in the line of duty, but who live to tell the tale, demand the same freedom to get rich quick by selling  their 'stories'.  It's easy to imagine the feelings on this subject of the families of the four British servicemen (two men and two women) killed by a bomb in Basra last week,around the time when the Fifteen were being released.

Just to be clear about the key facts and non-facts: 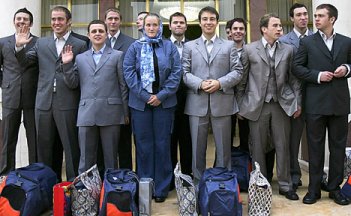 1. There can be no serious doubt that the Fifteen were in Iraqi waters (and therefore doing nothing wrong) when they were kidnapped.  This was actually corroborated by the co-ordinates originally handed over by the Iranians themselves, until they realised that they didn't exactly help their case, and invented some better ones.

2.  Kidnapping the citizens of another country, whether naval, military or civilian, without cause is a serious breach of international law, tantamount to piracy.  In another age — or if the Fifteen had not behaved so sensibly — it would have been an unquestionable casus belli.

3.  Even if the Fifteen had been in Iranian waters (which they pretty clearly weren't), there would have been no excuse for the Iranians' action in kidnapping them and taking them as prisoners to Iran.  The only proper course would have been to escort them back into Iraqi waters with a severe reprimand and a subsequent diplomatic protest to the British government.

4.  After being kidnapped the Fifteen were not in any sense prisoners of war: there is no war in the area to be a prisoner of.  The old rubric about giving no more than one's name, rank and serial number doesn't apply.

5.  At least one of the Fifteen has confirmed that their Rules of Engagement would have permitted them to resist capture with military force; but they decided, fortunately for all of us, that this would be pointless, that it wouldn't affect the outcome, and that causing bloodshed would only have made a bad situation infinitely worse.  Rabbiting on about how they should have been more heavily armed — and should have used their arms against  the Iranians — betrays a sad inability to grasp the realities that they had to deal with.

6.  Even if the mother ship's single helicopter had been giving the Fifteen air cover, it seems unlikely that matters would have turned out any differently.  The Fifteen might possibly have had somewhat earlier warning from the helicopter of the approach of the Iranian patrol boats, which could conceivably have given them time to run away back to HMS Cornwall (hardly the act of gallantry yearned for by the romantics, incidentally):  but given the much greater speed of the Iranians' boats, it seems most unlikely that our people would have got away.

7.  The treatment of the Fifteen by the Iranians was outrageous.  The blindfolding as part of what seemed like a mock execution; the isolation in tiny cramped individual cells; the mental torture inflicted on the sole servicewoman by telling her falsely on the first day that all the rest had been released and had gone home, leaving her alone in captivity; the threats of seven years' imprisonment as penalty for refusing to 'confess'; the parading in front of television cameras — all this was inexcusable.  Those who seek to condone it by observing that Guantanamo is worse should be ashamed of themselves.

8.  The episode has prompted the usual British media festival of  finger-pointing:  someone must be to blame.  One favoured culprit is the commander of HMS Cornwall and his superiors in London for exposing the Fifteen to such danger.  But this was not a wartime operation: the task was to check ships entering Iraqi waters for smuggled arms, drugs or other contraband, on behalf of and at the request of the elected Iraqi government.  True, the Iraqis had kidnapped some of our service people back in 2004 — but not since then.  Only the most pathetically risk-averse would seriously argue that no routine naval patrol should ever go out, in peacetime, in national coastal waters, without the substantial military protection that would be required to guarantee it against a random and unpredictable act of piracy by a nearby rogue state.  But will ministers have the guts to resist the demands of the media lynch mob?

(i)  Who is the fifteenth man?  Why has he not been named, nor his service identified?

(ii)  Those, 'ardent for some desperate glory', who are seduced by the romantic notion that dulce et decorum est pro patria mori (that it is sweet and proper to die for one's country), and who have the nerve to blame the Fifteen for not having been willing to act accordingly, would do well to remember the verdict on that proposition pronounced by a soldier, Wilfred Owen, who was himself about to die for his country (and must have known as he wrote that this would almost certainly be his fate):

If you could hear, at every jolt, the blood
Come gargling from the froth-corrupted lungs,
Obscene as cancer, bitter as the cud
Of vile, incurable sores on innocent tongues,
My friend, you would not tell with such high zest
To children ardent for some desperate glory,
The old Lie: Dulce et Decorum est
Pro patria mori.