The “President of Europe” and some other misconceptions

The sudden burst of media interest in the fading possibility of Tony Blair being chosen to be something erroneously described as “President of Europe” has given rise to an extraordinary number of misconceptions and misunderstandings.  In a post in the admirable website LabourList — admirable in many ways, not just because it publishes articles and comments by me — an otherwise estimable Labour MP says that “the new European President” will be “a sort of executive head of the government of Europe”, which is about as wrong as it’s possible to be.  Contributors to discussion of the MP’s article demand that the person who will chair meetings of the EU Council of Ministers (the main function of the proposed ‘President’ of the Council) should be elected by all the citizens of the EU — which really would set the EU on the road to becoming a federal super-state, something that hardly any EU government would dream of allowing it to be.  There seems to be little awareness of the fact that the existing six-month  Presidency rotating among the 27 member states will continue to provide the chairpersons of all but two of the various Councils of Ministers — the Council of Transport Ministers, for example, or the council of Environment Ministers.  Only the Council of Ministers or ‘European Council’ (of heads of EU state or government) and the Council of EU Foreign Ministers will have new Chairs:  the former will be chaired by the new ‘President’ of the Council, presumably not Tony Blair, and the latter by whoever holds the new and sonorously named post of “High Representative of the Union for Foreign Affairs and Security Policy” to be created under the Lisbon treaty, conceivably our very own David Miliband, who however persists in asserting that he is not available for it.   Few comments mention that the Council of Ministers already has and has always had a President — the head of government of the member state holding the rotating presidency at any one time;  or that both the European Parliament and the European Commission each also has its President, the latter probably the most powerful office-holder in the whole EU.

One of the LabourList discussion commenters asks why, if the post of President of the Council of Europe has such limited powers, British Labour ministers are pushing Tony Blair’s candidature for it so hard.  In reply to this interesting enquiry, I have suggested in my own comment several possible reasons, two of them tolerably reputable.  Together with some other contributors, and in the knowledge that I’ll be excoriated as arrogant for my pains, I have also tried to answer several other questions in LabourList comments, as well as seeking politely — or otherwise — to correct some of the more obscurantist misconceptions.  You can read all these comments at this location.   Do go across and join in the debate.  There’s still plenty of scope for fresh illumination.

As a wry postscript, I respectfully commend a most useful commentary on the whole question by the veteran Quentin Peel in this weekend’s Financial Times (31 Oct/1 Nov).  This describes entertainingly and informatively how the creation of the post of semi-permanent President of the Council of Ministers was imposed on an unpersuaded Europe by its autocratic and aristocratic inventor, former French 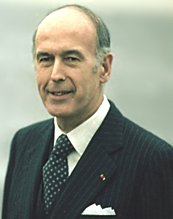 Président Valéry Giscard d’Estaing, “suspected of secretly coveting the job himself”.  Well, why not?  He’s the principal author of the ill-fated EU constitution from which much of the Lisbon treaty has been derived;  he has just written a novel in which he implies that he once had an affair with the late Diana, Princess of Wales;  and there can’t be many other former French Presidents who were born in Germany.  And he’s only 83.

How unfortunate it is that the French for ‘Chairman’ is ‘Président’!