The Wind that Shakes the Barley should also shake our consciences

The Wind that Shakes the Barley is Ken Loach on top form, implicitly (but never expressly) teaching a complex and subtle history lesson that implies, without ever stating them, a few terribly simple messages for our own times:   that military occupation of another nation always ends in violence and brutality: that the act of occupation brutalises not only the occupiers but also, even more tragically, the occupied: that the experience of resistance to alien occupation teaches a habit of violence that may be impossible to shake off even when the occupation ends: and that alien occupation may be disastrously divisive for the occupied, especially if they are already prone to internal division by reason of their religion, tribes, sects, social classes, economic inequalities, or otherwise. Only the deliberately blind can affect to miss the way that all these messages, each one carefully illustrated by Loach as it applied (in some ways still applies) to the Ireland of 1920, are horrendously relevant to Iraq in 2006.  Yet Loach never wholly demonises even the most brutal of the oppressors to the extent of painting them in simple black and white. He goes out of his way to show that the Black and Tans are individuals who have gone through the horrors and slaughter of the first world war, ended only two years previously, and have inevitably been brutalised by it; and an act of merciful courage by one British soldier who risks his life to save a group of Irish Republicans from imminent execution shows that even these men have consciences and can be brave in a good as well as a bad cause.

Nor is the Irish resistance depicted as uniformly heroic or saintly: the terrible moral dilemmas that constantly face them are shown to have no perfectly acceptable resolution, leading essentially decent men to commit acts of dreadful cruelty, not only against their oppressors but eventually against each other.  Anyone who can't recognise Iraq in all this can't have watched The Wind that Shakes the Barley with much attention. 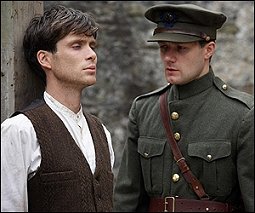 There are brilliant and sensitive performances by Cillian Murphy and Padraic Delaney as the two brothers; and every other part is played with sometimes gut-wrenching realism. There are scenes of violence and cruelty that are sometimes hard to watch, but they are always essential to the narrative and to the film's basic themes, never gratuitous. The photography is equally outstanding: look out for Loach's and Barry Ackroyd's subtle and effective use of colour and their constant reminders that the conflicts portrayed in the film are linked as if by umbilical cord to the land of Ireland, beautifully represented in contrast to the ugly violence that repeatedly defiles it. The political debates, the participants painfully seeking to find a way through the moral thickets of oppression and division, are seamlessly absorbed into the action, as gripping in their way as the agonising effects of violence on human relationships and the intermittent outbreaks of violence and cruelty themselves.

The squeals of 'anti-British!' from some of the more repulsive British tabloid newspapers can safely be ignored. This is great cinema. It richly deserved its Palme d'Or at Cannes.  Don't, on any account, miss it.  But don't expect light entertainment or, for that matter, a happy ending, either:  the film is set in 1920, and there's still no happy ending in Ireland in 2006.  Not an encouraging augury for Iraq, 2003.

Some interesting and perceptive published reviews: