If we needed a reason to applaud the romantic action of the Conservative Shadow Home Secretary, David Davis, in resigning his parliamentary seat in order to fight a by-election on the sole issue of the government's assault on our civil liberties (culminating in the folly 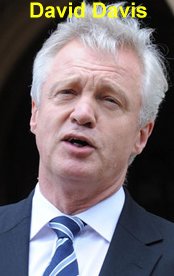 of extending the maximum period for detaining terrorist suspects without charge to 42 days), the outrage, scorn and insults heaped on him by his own Tory parliamentary colleagues and the apparent dismay of his leader, David Cameron, will do fine. They called him (mostly anonymously, of course) mad, bonkers, a traitor, driven insane by ambition, unhinged, undergoing a mid-life crisis, guilty of a catastrophic misjudgement.  Tory horror at Davis's move seems to stem from a belief that it will distract public attention from the mess that Gordon Brown has created by obstinately pursuing his indefensible 42-day detention proposal in the teeth of widespread criticism and scepticism within the parliamentary Labour Party and outright opposition from senior policemen, the director of public prosecutions, the head of MI5, and the former Labour attorney-general, to name but a few who know whereof they speak.  The liberal lobby, libertarian pressure groups such as Liberty, the Conservative Party and the LibDems are similarly opposed.

Why, then, do the Tories apparently object to what Davis is doing, if — as seems likely — his by-election campaign in his own former constituency will throw the spotlight once again on the government's folly?  Why has Cameron come as close as he dares to disowning Davis and his initiative? And why has the Tory leadership apparently let it be known that Davis, once re-elected, won't be allowed to return to the Conservative front bench but will have to serve out the rest of the parliament as a humble back-bencher?

The explanation seems to lie in the cosmic absence of enthusiasm on the part of many Conservative MPs, perhaps including some of his most senior colleagues, for Davis's civil liberties agenda.  The instincts of some of them covertly favour the government's authoritarianism; some would be prepared to accept almost any amount of destruction of our ancient freedoms and civil rights in the name of greater protection against terrorism;  others have seen the opinion polls suggesting majority support in the country for 42-day detention without charge, and fear that Davis's eloquent opposition to it is out of kilter with public opinion, which they are afraid will do them no good at the next election.  It's generally believed by the media and by other denizens of the Westminster hothouse that the Tory leadership's decision to vote against the 42-days measure last week masked a deep split among Tory MPs, and that it was only Davis's passionate commitment to the defence of civil liberties that forced the party's formal policy of opposition to 42 days down the throats of the unbelievers.  If so, the worry is that a highly publicised by-election fought exclusively on this issue might make it impossible to continue to conceal the split, thus damaging the Conservative cause electorally.  Some Tories are also complaining that by doing what he has done, David Davis has "let Gordon Brown off the hook".

Much of this seems to me nonsense.  The issue of civil liberties generally and 42-day detention in particular cuts across political parties, as last week's vote showed.  On 11 June, 36 Labour MPs voted against the government despite a three-line whip and weeks of threats, blandishments and other pressures from the Whips. The maverick Tory MP Ann Widdecombe, a former home office minister, broke ranks and voted with the government.  Had it not been for Widdecombe and the nine members of the reactionary Northern Ireland Democratic Unionist Party, including Ian Paisley, who abandoned their usual stance of opposition to the Labour government on all fronts to vote for 42 days, the government would have lost.  It has been widely alleged, and is even more widely believed, that the government bought off the DUP with promises, perhaps not explicit but apparently broadly hinted at, of various financial and other concessions to DUP demands for Northern Ireland that have nothing to do with national security or 42 days' detention without charge.  The government, naturally, denies this.  We shall see.

The paradox is that the government's nominal victory in the vote last week damaged it far more severely than a defeat would have done.  That victory had every appearance of having been bought, at the taxpayers' expense, by fundamentally corrupt means.  Victory means that instead of dying on Wednesday to almost universal relief, the 42-days proposal now goes to the House of Lords, where it faces further bitter controversy and almost certain defeat, perhaps by a large margin.  Davis's campaign against it at the by-election will add more expensive fuel to the flames.  If the government decides to use the Parliament Act to overrule the Lords, it will prolong the agony for at least another year.  Even if the measure is eventually forced through onto the statute book, it will certainly be challenged in the courts as incompatible with Britain's treaty obligations under the European Convention on Human Rights and it might well be struck down on that account, if not by the English courts then by the European Court at Strasburg (nothing to do with the EU, by the way).  All this will take years — and even if the thing survives all these challenges, it's almost inconceivable that it will ever be used in real life:  the government has been forced to 'concede' so many complicated safeguards and cumbersome forms of oversight by parliament as well as the judiciary before it can be activated that the procedure would collapse under its own weight if any government were to be rash enough to try to operate it.  Anyway, the Conservatives have promised to repeal it the moment they become the government, which now seems likely in less than two years' time.

All this misery and shame could have been avoided if the government had allowed the measure to suffer the defeat it deserved last week, consequently sinking ingloriously into instant oblivion (the measure, if not also the government).

Both by his principles and as a Conservative MP in opposition to a recklessly illiberal government, David Davis has plainly done a good and courageous thing.  The Labour dissident MP Bob Marshall-Andrews has already declared his intention of going to Davis's constituency of Haltemprice and Howden to support him in the by-election.  The LibDems, since they agree with Davis's opposition to 42 days and to the government's other attacks on our civil liberties, are not going to put up a candidate against Davis for the by-election, despite having come a fairly close second at the last general election.  The Labour Party is in a quandary:  any official party candidate standing in the by-election would have to defend the government's illiberal record on civil liberties and the depths to which it stooped to get its 42-days detention project through the Commons; the Labour candidate in the constituency is personally opposed to 42 days detention;  Labour's standing in the opinion polls is currently the lowest ever recorded, and even in the better days for Labour of the last general election, in Haltemprice and Howden Labour came a poor third to the Conservative (David Davis) and the LibDem.  Many LibDems at the by-election will presumably vote for Davis, since the issue on which he is fighting it is one on which most LibDems agree with him.  So a Labour loyalist candidate who campaigns on an anti-civil liberties platform against Davis is likely to be slaughtered at the polls, which can only add to the government's miseries and to Gordon Brown's personal humiliation.  Yet if Labour fails to field a candidate at all, the government will be accused, with justice, of a cowardly failure to defend itself on a major issue of policy and principle, for which indeed Bob Marshall-Andrews already condemns it. No wonder Brown has sought to dismiss the Davis ploy as a 'stunt'.  But there's no obvious way out of the dilemma.  Incurring a charge of cowardice will probably seem the least damaging of the options, so there'll probably be no Labour candidate.

But that doesn't necessarily mean that Davis will lack an adversary in the boxing ring, so that the whole match will fizzle out, an unnoticed fiasco.  If there's no Labour candidate standing, Kelvin MacKenzie, former editor of the right-wing Murdoch tabloid The Sun and a fierce advocate of locking up terrorist suspects for as long as the police might deem desirable, seems likely to stand on what will amount to a national security, anti-civil liberties platform, and he will be a noisy attention seeker, guaranteed to fill the pages of The Sun and other media outlets both serious and stupid.  He will be an embarrassment to Labour as the government's only apparent standard-bearer. A few other assorted loonies and weirdos may also seek their five minutes of fame by standing.  Marshall-Andrews may not be the only Labour MP or libertarian from the left to campaign for Davis.  It's difficult to imagine any outcome other than a sweeping victory for David Davis.  Such a victory will not unreasonably be represented as giving the lie to the assertion that the government has majority public support for its oppressive measures, including especially those targeted by Davis:  42 days, ID cards and their supporting national register, obsessive surveillance by CCTV cameras and intrusive powers to intercept private postal, telephone, fax and e-mail communications, thousands of innocent people permanently tagged on the vast national DNA database, people subjected indefinitely to virtual house arrest under Control Orders on mere suspicion of involvement with terrorism without even the right to know what they are suspected of having done or planned to do.

All my life I have voted Labour, sometimes with enthusiasm, sometimes as the least objectionable option (although I did once vote for Ken Livingstone when the Labour Party machine had in effect forced him to run as an independent for mayor of London).  Now I'm glad that I'm not on the electoral roll in David Davis's constituency of Haltemprice and Howden, trying to think of a decent reason not to vote, for the first time in my life, for a Conservative candidate who, on the issues at stake in this by-election, is on the side of the angels, while the policies being pursued by the government of the party I instinctively support are beyond the pale.  The points of Gordon Brown's 'moral compass' have gradually been reversed.

David Davis looks as if he has ingeniously trapped New Labour in a no-win situation.  Perhaps it's just as well that the rest of his party doesn't seem to be able to see it.  But beware!  The savvy Tory blogger Iain Dale has got it in one.  Meanwhile, three cheers for David Davis, and four for Bob Marshall-Andrews.