According to a report in the Guardian of 16 April, ‘Gordon Brown apologised for any disruption caused by the eruption [of the Icelandic volcano] but said, “safety is the first and predominant consideration.”‘   A spokesman for David Cameron immediately welcomed this admission by the prime minister of his responsibility for the eruption of the volcano but said his apology was completely inadequate:  “Since Gordon Brown has acknowledged that he is to blame for causing the greatest disaster in European aviation history, he should resign forthwith instead of keeping us all waiting until the 6th of May.  He should let Dave take over immediately — only Dave has the skills and imagination required to suppress the eruption of the volcano and to change the direction of the winds to blow away Labour’s ash clouds over Britain.”  A Conservative government would act within a week of taking office to get our planes flying again. 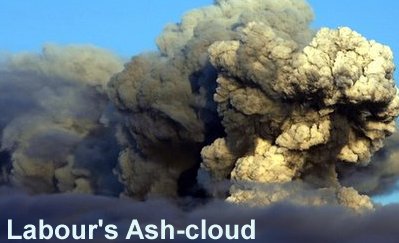 Sources close to Nick Clegg, the LibDem leader, were saying last night that the closure of all British airports and the uncertainty over when they would reopen demonstrated the failure over the last 65 years of both the tired old parties that had been taking it in turns to govern the country.  “Neither Conservative nor Labour governments bothered to do anything to prevent this disaster and it will now be up to a new, fresh, Liberal Democratic government headed by Nick to sort out the mess.”  Nick The sources added that Nick Clegg had been the clear winner in the leaders’ debate and looked forward to his invitation from the Queen to form a LibDem majority government.   St Vincent Cabling, the LibDem shadow Chancellor, told Jeremy Paxman last night on Newsnight that he had predicted the volcanic eruption as long ago as 1942 and had warned then that the prevailing winds would blow the ash over our airports, forcing them to close, unless we moved the airports to northern Spain while there was still time.  Unfortunately his warning had been ignored by the government of the day, as usually happened with his premonitions of assorted impending disasters.

In the same Newsnight programme last night, the Conservative shadow aviation minister, Henry ‘Jumbo’ Bumbleberry pointed out that when Labour came to power in 1997, they had inherited from the Tories a situation in which every single UK airport was open and functioning normally.  Now, after 13 years of Labour government, not a single plane was flying in or out of a British airport.   For 10 of those years Mr Brown had been responsible for the economy as Chancellor, yet in all that time he had done nothing to prepare the country for the crisis that had hit us last Wednesday.  He could not escape responsibility for the sufferings of British familes stranded in dangerous foreign countries such as the US or Australia, or whose binge holidays on the Costa Bravo had been ruined.  Who was to blame for “Labour’s ash-cloud” if not the Labour leader?  In reply, the prime minister pointed out that for years he had been trying to persuade the G20 to take collective action against Icelandic volcanoes but unfortunately the greedy investment bankers had refused to provide the credit to European governments that would have been needed for firm resolute action to be taken.  Mr Brown had himself been firm and resolute and had indeed been recognised as the world’s leader in the struggle against volcanic eruptions, but the rest of the world had lacked both the courage and the credits needed to follow him.  However, he had accepted his responsibility for what had happened and had apologised to the nation.

This morning a Liberal Democratic Party spokesperson issued a statement claiming that Nick Clegg had been the winner of the leaders’ television debate.  She added that “my Nick’s ready to be prime minister whenever that Gordon realises that with the airports all closed the game’s up and he will have to resign.  Gordon was right to apologise, though.”

A spokesman for UKIP blamed the EU for ordering Britain to close its airports so that other European countries could steal business from British airlines.  “Britain should get out of this cowardly European Union and order our aeroplanes to start flying again immediately.  Our brave British pilots aren’t afraid of a bit of harmless dust even if the faint-hearts across the Channel are.”   The BNP said immigration was out of control and that this was to blame for the airport crisis.  It was Nature’s wonderful way of preventing yet more immigrants flying in to take away jobs from Englishmen.

In a new up-date at 2am this morning, the Civil Aviation Authority announced that in view of the Met Office’s latest forecasts, all flights in and out of UK airports would remain suspended until 4am on 31 January 2011 at the earliest.  A further statement would be issued in the middle of the night on 25 December 2010.

In the latest MeGov opinion poll in the Son newspaper, the LibDems were on 95%, the Tories on 4% and Labour on 1.  Experts predicted that if this was still the position on polling day, Labour would be the biggest party in a hung parliament.

[Note: The first sentence above is true.]