Wagging our finger at the Russians: bad idea

Timothy Garton Ash is a formidably well informed and shrewd commentator on international and especially European affairs, but his article in the Guardian on 28 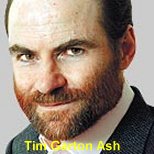 February 2008 laid him wide open to the charges of hypocrisy, ignoring the beam in the west's eye in his enthusiasm for denouncing the mote in Russia's, and perpetuating a kind of knee-jerk anti-Moscow prejudice, a hang-over from the cold war which is badly in need of a quadruple dose of political Alka-Seltzer.  It's heartening to see reactions to Mr Garton Ash's piece on precisely these lines in the numerous critical comments appended to it in the Guardian blog, Comment is Free.

Today's Guardian publishes a (by my standards) short letter from me pointing out three specific examples of notably explicit double standards in the Garton Ash article:  it's the second of two letters on the Guardian website page (click here and then scroll down to it).  As the Guardian's published version is slightly truncated, here's the text of my letter as originally submitted:

Timothy Garton Ash urges us to spell out to Moscow the terms of closer western engagement with Russia: more respect for the sovereignty of neighbouring states, for human rights and for the rule of law, at home and abroad ('Russia has run rings round the west', February 28).  But since Britain has failed to respect Serbia's sovereignty by colluding in the illegal amputation of part of its sovereign territory (Kosovo);  has failed to respect human rights by introducing a mass of illiberal anti-terror legislation that includes detention or virtual house arrest for people neither charged with nor convicted of any offence, and permitting UK sovereign territory to be used for illegal extraordinary rendition flights;  and failed to respect the rule of law when we participated in armed attacks on Yugoslavia (1999) and Iraq (2003) without UN authority and in breach of the UN Charter, wagging our fingers at Moscow in the way suggested might invite a rather embarrassing retort, don't you think, Mr Garton Ash?

Russia is no-one's ideal example of a liberal democracy, but the obloquies constantly heaped on it from the west do seem quite out of proportion to the realities, as well as ignoring the extent to which western policies and attitudes have shared the responsibility for current tensions and suspicions.  It's now fairly generally admitted that it was a mistake to saddle Russia, immediately after the collapse of the Soviet Union (itself a by no means unmixed blessing), with a peculiarly crude form of free market capitalism which brought real hardship to millions of Russians and created the régime of the mega-rich oligarchs that we see today.  The similar rush to extend NATO membership out to the borders of Russia, including large areas that Moscow legitimately regards as within its own sphere of influence, was widely denounced even at the time as a crass misjudgement, certain to revive traditional (and perfectly understandable) Russian paranoia about encirclement by potential enemies.

There's more.  The west's attempt to exclude Russia from involvement in the action against Milosevic's Yugoslavia over Kosovo in 1999 was a humiliating failure, depriving the NATO bombing of international legitimacy and eventually forcing the west to seek Russia's help in ending the crisis and allowing NATO to end its destructive and pointless bombing campaign.  Four years later the US and UK failed to learn the lesson of Kosovo — that it's both possible and desirable to include Russia in a major international action which affects its legitimate interests — by ignoring Russian and many other countries' objections to the premature use of force against Iraq, by-passing the UN, and going ahead with an illegal aggression whose dire consequences we still live with.

On a smaller scale, the UK sought to make good relations with Russia conditional on Russia's agreement to extradite a Russian citizen to Britain in the face of the reality that the Russian constitution forbids any such extradition (would that ours did the same!), on the face of it an idiotic, because obviously doomed, condition to try to impose.

Now we have yet again repeated the same mistake as those in Kosovo and Iraq by ignoring the powerful and well-founded objections of Russia and Serbia (as well as of other regional countries) by going ahead with the active incitement of the Kosovo Albanians to secede illegally from Serbia and precipitately recognising that phoney 'independence' as soon as it had been declared — guaranteeing that the new status is deprived of UN recognition and international legitimacy because of the resolute opposition to it of at least two veto-wielding members of the Security Council.

In every one of these cases patient and constructive diplomacy could almost certainly have produced eventual agreement on collaboration with Russia instead of the doomed attempt to ignore and defy her.  The resolution of the Kosovo crisis was brought about by precisely such constructive and patient diplomacy — conducted secretly by envoys of the US, Russia and Finland, almost certainly without the knowledge or approval of the Blair government in the UK — producing at least an interim solution which ended the bombing, secured the substitution for the former Serb administration of an international UN-backed administration and peace-keeping force in Kosovo, and gave the settlement the blessing of international legitimacy, all by securing Russian participation.

In the words of the song, when will we ever learn?