This blogger is the author of a book published by Rowman & Littlefield last week, What Diplomats Do: the life and work of diplomats. This is precisely what it says on the tin; it’s not another ex-diplomat’s thinly disguised, self-published memoirs. After writing millions of words in blog posts, articles, emails and letters, I have at last got round to writing a book. I shan’t do it again, so buy it now before the 20% discount offer lapses. 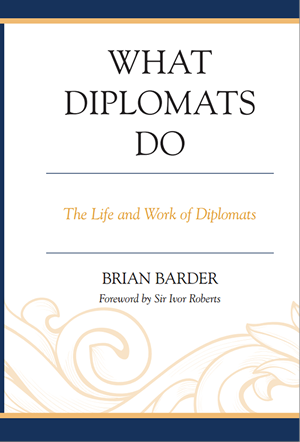 There’s more information about the book at http://www.barder.com/wdd/ (and pages to which it links — hat-tip: my IT guru, Owen), including:  the full texts of two sample chapters (one of them the explanatory Introduction);  extracts from some flattering pre-publication reviews by eminent academic teachers of diplomacy and international affairs and by some equally eminent former ambassadors; and an order form that you can download, fill in and send off if you want to get that 20% discount while it lasts.

What do diplomats actually do, not according to academic theory but as a matter of day-to-day reality? That is the question that this book seeks to answer by describing the various stages of a typical diplomat’s career. The book follows a genuinely fictional diplomat — no, he’s not me thinly disguised — from his application to join the national diplomatic service, through varied postings at home and overseas, culminating in his appointment as an ambassador, and eventually his retirement. Each chapter contains illustrative factual anecdotes, some more serious than others, drawn from the author’s 30 years’ experience as a diplomat, ending with postings in four countries in three continents as an ambassador and high commissioner.

What Diplomats Do examines various aspects of the life of a diplomat, contrasting his or her work in an affluent, friendly country with that in a developing country and one with a hostile government, describing the impact on personal and family life and personal security, as well as the privileges and drawbacks of serving as an ambassador. The writer discusses the potential influence of the individual diplomat in helping to formulate and carry out his government’s foreign policy decisions.

Rowman & Littlefield, the book’s publishers, say of What Diplomats Do:

Rigorously academic in its coverage yet extremely lively and engaging, this unique work will serve as a primer to any students and junior diplomats wishing to grasp what the practice of diplomacy is actually like.

With that [diplomatic] experience and as the editor of the new edition of the classic diplomatic textbook Satow’s Diplomatic Practice, I hope that I can be considered capable of distinguishing a diplomatic hawk from a handsaw. So while books on diplomacy and diplomatic life are not a rarity, Brian’s offering fills a real gap in the market. It is neither a manual, though it offers excellent practical advice, nor is it a memoir though the text is interspersed with often entertaining and illuminating anecdotes. It does instead what it promises: it tells you exactly what it’s like to be a diplomat and what sort of challenges you face on an every-day basis.

The Lee E. Dirks Professor of the History of Diplomacy at The Fletcher School of Law and Diplomacy, Tufts University, wrote about the book:

The Emeritus Professor of International Politics at University of Leicester, Senior Fellow, DiploFoundation, and author of the standard textbook on the Theory and Practice of Diplomacy, wrote:

I know of no other book on diplomacy which is so instructive as to procedure, entertaining in its examples, vivid and engaging in its style, massively authoritative, and original in its structure. A few passages dealing with real events are also gripping, notably that describing Sir Brian Barder’s recommendation – in the event momentous in its significance – to recommend a green light for RAF relief flights to Addis Ababa during the great Ethiopian famine in 1984. I think it is a brilliant book…

More information about What Diplomats Do is on the website of the publishers, Rowman & Littlefield, at https://rowman.com/ISBN/9781442226357.

University and college teachers of diplomacy and international affairs can request an inspection or exam copy of the book from the publishers by clicking the relevant tab in the left-hand panel of the relevant web-page. Editors or reviewers at learned — or indeed unlearned — journals and newspapers can similarly ask Rowman & Littlefield for a review copy in the same way. Academic teachers in the field who have already read the book are unanimous — so far! — in saying that they will use What Diplomats Do as a teaching tool and will include it in their students’ recommended or required reading lists.

But What Diplomats Do is not formally a text-book, although it can serve as one; it is written just as much for the general reader with an interest in current affairs, who knows about diplomacy in general terms but who may be curious to know the kinds of things that individual diplomats — junior as well as senior, third secretaries as well as ambassadors — actually do between getting up in the morning, and slumping back into bed early the following morning, after a long day’s unglamorous work and (probably) a spectacularly tedious diplomatic dinner party that has dragged on into the small hours. What Diplomats Do fills in the gaps and aims to be an enjoyable as well as an informative read.