According to today’s Guardian, the statesman and Nobel peace prize winner Martti Ahtisaari has revealed what looks like a spectacular failure in Washington, London and Paris to respond to a Russian proposal in 2012 for a peace settlement in Syria that would have included an undertaking by President Assad to step down.  Since a major obstacle to a settlement has long been, and apparently remains, the west’s stubborn and misguided insistence that any settlement must include the removal of Assad from the presidency, our apparent rejection of the Russian offer looks like the biggest and most expensive western foreign policy blunder since the attack on Iraq. 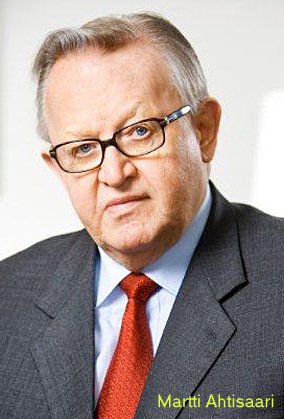 Martti Ahtisaari, the veteran UN peace negotiator and conciliator, and former President of Finland, is one of a small handful of truly great peace-makers of our time, having played key roles in, for example, Namibia, Aceh, Kosovo and Iraq.  I was privileged to witness him at work during the negotiations leading to Namibian independence and have been an ardent admirer ever since.  On one occasion I delivered some documents to him in his hotel bedroom in London soon after his arrival there on a flying visit, and well remember a fascinating and informal conversation with him, myself perched on the side of his bed and Ahtisaari squeezing his considerable bulk into the only arm-chair.  I was a relatively junior British diplomat at the time but he listened to my tentative views and suggestions as intently as if I had been the Secretary-General of the United Nations.  His extraordinary successes in helping to resolve some of the most difficult issues in international affairs since WW2 have depended largely on his manifest integrity and the willingness of the most suspicious parties to violent disputes to trust him accordingly.  He will have thought long and hard before going public now with his extraordinary revelation of the rejected Russian offer over Syria and I have no doubt at all about the complete accuracy of his account.

According to the Guardian report, which should be read in full, the Russian proposal contained three elements:

[Vitaly Churkin, the then Russian ambassador to the UN,] said three things: One – we should not give arms to the opposition. Two – we should get a dialogue going between the opposition and Assad straight away. Three – we should find an elegant way for Assad to step aside.”

Churkin declined to comment on what he said had been a “private conversation” with Ahtisaari. The Finnish former president, however, was adamant about the nature of the discussion.

“There was no question because I went back and asked him a second time,” he said, noting that Churkin had just returned from a trip to Moscow and there seemed little doubt he was raising the proposal on behalf of the Kremlin.

On the face of it, this is yet another example of disaster costing lives and treasure as a result of western attempts to exclude Russia from negotiations on great international issues, or to sideline her, even where there are legitimate Russian interests at stake, as there are in Syria.  Prime examples have been Kosovo, Iraq and of course Ukraine, as well as Syria.  In most of these cases Russia has behaved more or less badly, but Russian misbehaviour has been aggravated by the west’s consistent failure to pay due regard to Russian interests or to include Russia in planning for settlements.  No-one can know whether the three-point Churkin plan, including Assad’s removal from the presidency, would have provided the basis for an eventual settlement, and an end to the anti-Assad insurgency which instead led to the emergence of the monstrous Islamic State (ISIS), the loss so far of around 220,000 lives (the UN estimate in early 2015), the exile from their homes of millions of Syrians and the enormous refugee problem now confronting Europe.  If Ahtisaari is right in his belief that the three western permanent members of the UN Security Council chose to ignore or to reject the Russian initiative, those who made that choice bear a heavy responsibility.