At least six cheers for the National Health Service!  That's my rather unexpected verdict on a week as the guest of Mr Alan Johnson (Secretary of State for Health) and his predecessors, even including Ms Hewitt; a consultant endocrinologist and his sizeable medical team; countless nurses and health assistants and cleaners, and not least a personage called the Ward Hostess who delivers meals at bizarre times – some hospital traditions die hard – and offers tea and coffee throughout the day with unfailing cheerfulness.  She was in no way to blame for the lamentable quality of most of the food, another old hospital tradition that refuses to die.  My treatment, for a very severe leg infection, was impeccable from admission to discharge, with intravenous antibiotics in elephantine doses pumped into fugitive veins every couple of hours and exhaustive monitoring of every bodily function capable of being measured.  With very rare exceptions, the nursing staff were splendid: friendly, efficient, sympathetic, often funny.  Along with many of the younger doctors and technicians, they were a collective United Nations, from just about every continent and racial group.  Now that a few NHS doctors and other NHS medics from foreign parts have taken up murderous terrorism as a hobby for their spare time, any attempt to cut back on non-indigenous NHS staff would effectively mean closing down the NHS.

One old hospital tradition that does seem to have died is the restriction of visiting hours to a couple of hours a day, generally when most ordinary people are at work.  Nowadays there's effectively unrestricted visiting, despite menacing signs in the corridors forbidding visiting at particular times (I suppose these signs are displayed to remind everyone of the bad old days).  As a result many patients' morale is boosted by frequent visits of relatives, often seemingly of entire extended families, creating something like a party atmosphere in the ward.  The downside to this new-found freedom is that the unrestricted flow of visitors must sharply increase the risk of introducing infections by one or other of the potentially lethal superbugs, such as MRSA and C Difficile, which plague almost every NHS hospital and often convert even the most trivial medical conditions into life-threatening (and too often life-destroying) crises. 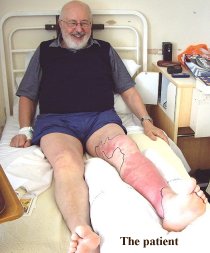 Happily, it's been a good many years (until last week) since either my spouse or I have been an NHS in-patient, but a comparison between J's experience eight or nine years ago and mine last week in the same hospital is instructive and extremely positive.  She was condemned to days and nights of filthy sheets, no available pillows, impossibility of attracting the attention of a nurse even in moments of crisis (most of the nurses then were indifferent agency staff with no commitment to a particular hospital or ward), often missing meals because the food and tea trolley had run out before it reached her, indescribably dirty wards and unspeakable loos, nurses refusing to undertake any cleaning task on the grounds that it was for the cleaners (mostly off duty) and not for them, and virtual inability to communicate with the outside world because of the ban on using a mobile telephone (ban justified by the mendacious assertion that mobiles interfered with electronic medical machinery).  Now, if my experience last week is anything to go by, every one of those gruesome manifestations has been removed and reversed, with huge gains for patient morale and indeed patient health.  Those who grumble that the tripling of expenditure on the NHS has produced no proportionate benefits for patients, only for consultants, must be very healthy people indeed, with no recent first-hand experience of treatment in an NHS hospital.

One tiresome long-standing feature of hospital life is the impossibility of watching television (or of maintaining telephone contact with family and friends if the patient has no mobile telephone of his own) without paying the exorbitant charges imposed by the ubiquitous and iniquitous 'Patientline' system.    The advertisements for this plastered all over the wards proclaim that the fee for use of the television set comes with "free" radio, telephone and internet facilities, although the small print reveals that the cost of making or even receiving a telephone call on this system is horrendous, and getting a refund of unused credit makes rocket science seem like a game of tiddlywinks.  Fortunately the lifting of the ban on mobile telephones, and the ready availability of small pocket radios with a headset or ear-pieces, enables all but the most seriously addicted television-watcher to raise two fingers to Patientline.  One tip, though, to anyone planning a spell as guest of an NHS hospital:  take in a good quality pair of headphones for the pocket radio (Sennheiser recommended, although not cheap).  It's possible to use the earphones provided by Patientline without having to subscribe to that system, but the Patientline earphones are almost completely useless – even worse than the ones you get on aeroplanes.  My iPod, too, hitherto used mainly during gym workouts to relieve the tedium of the treadmill and the exercise bike with Brahms, Shostakovich, Miles Davis, Mahler and Billie Holiday, really came into its own (but don't forget to take in the charger).

It's a truism that a patient typically gets admitted to hospital suffering from one disagreeable medical condition and later comes out with three.  In my case the two new conditions were not infections caught from other patients or their visitors, but new problems revealed by various routine tests automatically undergone by in-patients.  Both concerned organs far removed from the infected leg and probably unrelated to it, although further tests were naturally required to eliminate that possible connection.  Those done, yet more tests were ordered to establish the exact nature and causes of the two new problems.  So the monotony of lying on the bed in the ward, waiting for the next pump-in of concentrated antibiotics through the needle permanently lodged in a vein in the back of my hand, was mercifully relieved by batteries of X-rays, ultrasound and other scans, and echocardiographs, all involving hair-raising expeditions in the wheel-chair up and down in the enormous lifts and hurtling along miles of crowded corridors, with metaphorical sirens blasting a way through.   Modern technology has developed a raft of machinery capable of penetrating the darkest recesses of the human body and its organs, immortalising the resultant Technicolor videos and statistics as data in the hospital servers;  and since it's possible to use it, there's obviously no reason not to.  As a result the hospital computers now know more about me than I either know or want to know about myself, and the coming months will be fully occupied by appointments at clinics to assess the many test results and to debate the pros and cons of available treatments.  None of the new problems seems to be life-threatening or even particularly exciting, but following them up will help to pass the time freed by retirement, and at least it gets me away from the computer.

*  *  *  *  *
Those, if any, of a masochistic disposition may care to view a picture of the offending leg, and another of the leg with its owner, here and here.  And, as a postscript for the benefit of American and other non-Brit readers, all this, including the tests and the drugs and the ghastly food, even including the bulging bag of drugs to take home to cover the next month's medication needs, all of it is completely free, as Nye Bevan originally conceived it.  Of course foreigners who come to Britain with a pre-existing condition in order to seek treatment for it under the NHS have to pay;  but we natives, and foreign visitors needing emergency treatment after their arrival, get it on the house.  Hillary Clinton please note.