A sparkling musical at the Landor theatre

In an enthusiastic post in Ephems in November 2004 I recommended a new play, Cumquats, at one of London's most adventurous and attractive little theatres:  the Landor, over the Landor pub in Landor Road in south London (a stone's-throw, not usually literally, from Clapham North tube station and various bus stops).  Now there's a 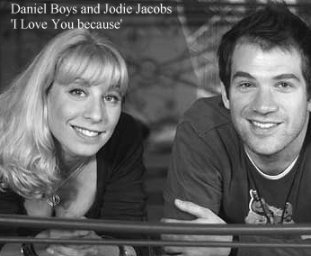 first-rate musical at the Landor, I Love You Because (click there for links to the story, lively pictures of the cast, and a page for booking seats).  It has all the qualities we associate with an outstanding American off-Broadway musical (first performed in 2006):  Sondheim-like, brilliantly performed by an attractive cast of six, witty and clever lyrics, delicious music, funny, touching, corny, sexy.  You can hear clips of some of the songs from the original New York production here, and read some of the original enthusiastic reviews here.  The review in the New York Times summed it up:

The authors, both out of the New York University graduate program in musical theater writing, bill this as "a modern-day telling of 'Pride and Prejudice' with the genders reversed," but don't let that scare you away; no CliffsNotes needed. As for the story, well, it ends up exactly where you know it will, because this whole show is constructed by formula. But who cares? It's terrific, refreshing fun.

The production makes ingenious use of the tiny acting space to switch from scene to scene, cameo to cameo, using minimal props and skilful lighting (you can get an idea of the complexity of the lighting script in this article).

But it's only on for another week, closing next Saturday, 20 October.   The performance last night was sold out, so there may be few seats left by now for the rest of the run.  Hurry!