Bush invites suggestions on Iraq, and other curiosities

It's hard to know whether to laugh or weep at President George W Bush's gut-wrenching public appeal for "any idea or suggestion" from anyone, anywhere, that might get the 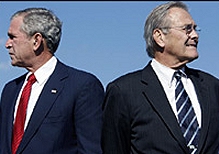 mighty United States out of the morass of its Iraq policies.  Surrounded by the whole of his Cabinet (apart from Rumsfeld, sacked a few minutes earlier but still nominally in office), and looking both rattled and mortified by the news that the Senate, as well as the House, had now definitely fallen to the Democrats, the President told a press conference on national and international radio and television:

One of the most important challenges facing our country is the war on terror, and Iraq is the central front in this war. Our country now has more than 149,000 men and women serving bravely in that country… I'm open to any idea or suggestion that will help us achieve our goals of defeating the terrorists and ensuring that Iraq's democratic government succeeds.

Well, that's one way of thinking up changes in policy when they seem to be needed.  One suggestion I've heard is the single word: "Leave!"  I can't improve on that.  Send this and any other ideas or suggestions to comments@whitehouse.gov — but only if they are constructive, please.

By contrast, Britain's Foreign and Commonwealth Secretary, Margaret Beckett, needs no suggestions or ideas for changes in our Iraq policies.  Mrs Beckett has just re-confirmed that our government has transferred to that country's government, such as it is, the heavy responsibility for determining the timing of Britain's troops' withdrawal from Iraq :

Mrs Beckett insisted that Britain would honour its commitment to the government of Nouri Maliki, the Iraqi PM, to retain UK forces in the country for as long as they were required. "We will leave when they are confident that they can take the role of security in the country on their own shoulders," she said.
(British Foreign & Commonwealth Secretary Margaret Beckett, speech to the Royal United Services Institute, London, 9 November 2006; my emphasis)

Let's hope the Iraqi government will remember to let us know when they are ready to let us go.

Less serious tailpiece: At a roundup of Guy Fawkes Night bonfire news, a Canadian website confirms a Guardian report that the celebrations in Lewes, Sussex, included the burning on the bonfire of effigies of Guy Fawkes and — of all people — Condoleezza Rice, including a rather striking photograph, captioned:  "An effigy of U.S. Secretary of State Condoleezza Rice dressed as Wonder Woman parades down Lewes High Street in East Sussex".

Why Condi, I wonder?  And why did they dress her up as Wonder Woman before burning her?  No doubt the sober citizens of Lewes had their reasons.   Anyway, it knocks spots off that tedious American import, Halloween, excuse for begging with no discernible historic or political undertones.  Save the fifth of November, Gunpowder, Treason and Plot, for Guy Fawkes!