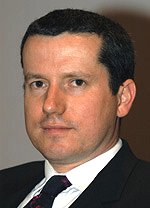 report.  Ross was the First Secretary in the UK Mission (delegation) to the UN dealing with Iraq, WMD, sanctions, etc., for more than four years (specifically from December 1997 until June 2002), i.e. before the US/UK attack on Iraq in March 2003, but he kept in touch with former British and other colleagues throughout the period.  He resigned from the Diplomatic Service after giving his evidence to the Inquiry, on the grounds of his objections to the way UK policy towards Iraq had been pursued during the lead-up to the war and to the way in which the war had been publicly justified.

Last month (on 8 November 2006) a member of the House of Commons Foreign Affairs Select Committee made strenuous efforts to persuade Carne Ross to pass to the Select Committee his classified evidence to the Butler Inquiry under the protection of parliamentary privilege (the transcript of his exchanges with Ross and with the Chair is well worth reading), but the Committee seems subsequently to have decided not to ask for it [1].

Today, however, the Independent newspaper has published the full transcript of Carne Ross's hitherto secret evidence to the Butler Inquiry.  It contains a number of important and potentially damaging points which will repay detailed analysis by the commentariat.  One of these is of special interest to students of United Nations resolutions and their interpretation.  According to Ross, —

Resolution 1441 did not authorise the use of force in case of non-cooperation with weapons inspectors. I was in New York, but not part of the mission, during the negotiation of that resolution …. My friends in other delegations told me that the UK sold 1441 in the Council explicitly on the grounds that it did not represent authorisation for war and that it "gave inspections a chance".
Later, after claiming that Iraq was not cooperating, the UK presented a draft resolution which offered the odd formulation that Iraq had failed to seize the opportunity of 1441.  In negotiation, the UK conceded that the resolution amounted to authority to use force (there are few public records of this, but I was told by many former colleagues involved in the negotiation that this was the case). The resolution failed to attract support.

This is not the place for an intricate textual analysis of resolution 1441 and whether it implied authority for the use of force against Iraq in the event of Iraqi non-compliance with the UN and its weapons inspectors without the need for a further 'decision' by the Security Council.  To state the case briefly, it has been asserted on behalf of the British government that the absence of the word decision or decide from paragraph 12 of the resolution, requiring the Council only to "consider" the situation and not to take any further decision on what to do about it, means that the resolution did authorise force without the need for a "second resolution":

12.     Decides to convene immediately upon receipt of a report in accordance with paragraphs 4 or 11 above, in order to consider the situation and the need for full compliance with all of the relevant Council resolutions in order to secure international peace and security; … [My emphasis — BLB]

The validity of this obviously counter-intuitive assertion, which is at the heart of the British Government's defence against the charge that the attack on Iraq was illegal, depends on a number of factors.  One of these is close analysis of the Explanation of Vote by the British ambassador to the UN (which appears to confirm that the resolution does not contain any authorisation for force without a further Council decision, although it can just about be interpreted as falling very slightly short of this):

We heard loud and clear during the negotiations the concerns about "automaticity" and "hidden triggers" – the concern that on a decision so crucial we should not rush into military action; that on a decision so crucial any Iraqi violations should be discussed by the Council. Let me be equally clear in response, as a co-sponsor with the United States of the text we have adopted. There is no "automaticity" in this Resolution. If there is a further Iraqi breach of its disarmament obligations, the matter will return to the Council for discussion as required in Operational Paragraph 12. We would expect the Security Council then to meet its responsibilities. [My emphasis — BLB]

Another element in the UK government's defence is the so-called 'negotiating history' of the resolution:  whether members of the Council knew from their private discussions of the text eventually adopted as Res. 1441 that the omission of the word decision or decide from Paragraph 12 would be taken by the US and the UK as constituting authority for them to attack Iraq without the need for a further resolution of the Council explicitly authorising them to do so.  However, since there is no official or other record of those secret discussions leading to Res. 1441, or none that is publicly accessible, we may have to wait for the memoirs of the participants before we can judge the weight to be attached to this proposition.  On the face of it, it looks flaky.  All the sadder that the Foreign & Commonwealth Office seems to have succeeded in preventing Sir Jeremy Greenstock (the British ambassador to the UN at the time) from publishing his memoirs, at any rate for some considerable time.

Meanwhile at least one of the interesting points to emerge from Carne Ross's Butler Inquiry testimony is his understanding at the time, from his New York contacts involved in these negotiations, that

Resolution 1441 did not authorise the use of force in case of non-cooperation with weapons inspectors. …. My friends in other delegations told me that the UK sold 1441 in the Council explicitly on the grounds that it did not represent authorisation for war and that it "gave inspections a chance".

If, contrary to what Ross was being told at the time, members of the Council really did know and accept from the negotiation of the text that Resolution 1441 authorised the use of force against Iraq without the need for a further decision in a fresh resolution, it's hard to explain why Britain went to such inordinate lengths to secure a "second resolution" containing that authority, failing dismally to obtain it, and indeed why those members of the Council who were vocally opposed to the use of force at that time without the Council's explicit authority (including France, Germany, Russia, China and Germany, with others constituting a clear majority of the Council) nevertheless voted unanimously for Resolution 1441.

All this may appear to some to be counting angels on the head of the proverbial pin.  But it goes to the heart of the question whether Britain was in breach of the Charter and thus of international law by participating in an unauthorised attack on a sovereign member state of the United Nations.  Such a breach is properly described as an act of aggression and indeed a war crime;  those responsible for committing it are equally properly described as war criminals.  The Independent [1], and Carne Ross, have performed a valuable service by contributing a new piece of evidence on this point:  it's not decisive, certainly, but it's suggestive, to put it at the lowest.

[1] Update (19 December 2006):   In a later Ephems entry I have corrected a couple of factual errors in this piece concerning the actual roles of the Select Committee on Foreign Affairs and the Independent newspaper in arranging the publication of Carne Ross's previously secret written evidence to the Butler Inquiry.  Please also see Craig Murray's comment appended to it.