I have recently been dragged, kicking and moaning softly (not screaming, though), into the eerie world of Facebook, reportedly the thinking man's — and presumably woman's — MySpace, or is it YouTube?  On each visit I find myself increasingly bewildered by a profusion of invitations from knowledgeable and streetwise 'Friends' (a Facebook technical term) to expand my Facebook repertoire by including some new and even weirder function.  Most recently I have consented to open a FunWall on which 'Friends' can inscribe or plaster messages, pictures or even video clips.  The first to take advantage of this astonishing meme is Stephen Grey, exposer of Extraordinary Rendition (more on that and him here).  Stephen has used my FunWall to introduce me to a very funny 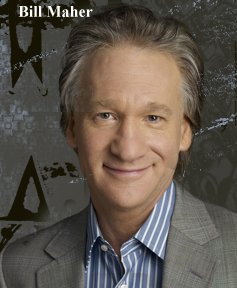 American humorist and commentator, Bill Maher, by projecting onto my FunWall Maher's hilarious take on France and American attitudes to the French.  You can find it on YouTube, here. Strongly recommended.

On the same YouTube page there are links to other Maher clips which are doubtless equally well worth watching.  Information about Mr Maher is (predictably) here, including the following sample of his style, this time on conspiracy theories:

"Crazy people who still think the government brought down the Twin Towers in a controlled explosion have to stop pretending that I'm the one who's being naïve. How big a lunatic do you have to be to watch two giant airliners packed with jet fuel slam into buildings on live TV, igniting a massive inferno that burned for two hours, and then think, 'well, if you believe that was the cause…' "

He's even funnier, though, on American views of the French.  A treasure.