In 2002, we celebrated our family Christmas (those of us living in England, and Virginia’s friend Nicola) in Ouistreham.  The escape from the enforced jollifications of an English Christmas — paper hats and party games, crises over the cooking of the turkey with five veg and turkey-substitute for the vegetarians, the washing-up, the obligatory drinking — was a definite success, so we reassembled this year (twenty-O-three*) further north, in Lille: less than two hours away from Waterloo by EuroStar, no need for a car or a ferry, rooms booked back in July or August at a hotel overlooking the main square and a hundred yards from the nearest Lille Mtro station, one stop from the main Lille railway station.

The hotel was clean, semi-traditional, semi-modernised, ever so slightly and endearingly run-down.  The staff were unfailingly friendly and helpful, discreetly moving us at our request to the best rooms in the hotel (despite our having paid heavily discounted package rates entitling us only to rooms overlooking the other side of the building, or worse) with glorious views directly onto the splendid Grand’Place, formally the Place du Gnral de Gaulle — see some pictures of it, and us, on the accompanying page and more again on another web site.  There must have been twenty or thirty restaurants and cafs, ranging from grand to jolly, within four minutes of the hotel entrance, along with the bustling and colourful Christmas market, the tourist office and plenty of shops and stores, with dozens more beyond.  On a one-day reconnaissance in November, Jane and I had quickly established that most restaurants would be closed on Christmas eve, and a good many on Christmas day for lunch, so we made advance bookings at the celebrated sea-food restaurant, l’Huitrire, for Christmas day, and at its sister restaurant l’cume des Mers, about 50 metres from the hotel, for dinner on Christmas eve.  Christmas lunch l’Huitrire was a memorable occasion:  perhaps the best single meal of any kind that I can remember, anywhere.  According to the note I made at the time, the oysters we began with (after an amuse-bouche or two) were Hutres Fines de Claires de Marennes-Oleron de Jacques Barreau (who he? lucky chap, whoever he might be) Boursefranc No. 2 at 29 la douz.  Very easily slipped down.  The turbot, a speciality of the house, was cooked to perfection in a parcel — more a skein — of crispy-browned potato on a sublime sauce of butter, mushrooms and truffles.  I shall not disgrace the group by describing the desserts, beyond saying they were wicked in both ancient and modern senses.  The Pouilly-Fum belied its absurdly reasonable price by being in tip-top condition, an ideal lubricant.  Owen, our house vegetarian (“ni viande, ni poisson” — that was his catch-phrase), was sympathetically but uncomprehendingly catered for with very passable salad and omelette.  We tactfully averted our eyes from these.

We dribbled helplessly over many other outstanding meals in Lille — gorgeous breakfasts at the original Art Deco bakery and tea-shop-cum-caf Paul, lunches and suppers at La Chicore just outside the hotel, delicious blinis# (with free second helpings) in a converted butcher’s shop where the loo was the former cold store, still labelled Frigidaire, a memorable final dinner before departure at the scarcely less famous, bustling Aux Moules where by the time we started on our first courses the queue for a table stretched back far into the rue de Bthune: but nothing could have compared with that Christmas lunch.  Even the quantities were perfectly conceived, avoiding both the grossness of huge American servings and the opposite extreme, the grudging meanness of “French” restaurants in London seizing the economies of scale once, long ago, made available by 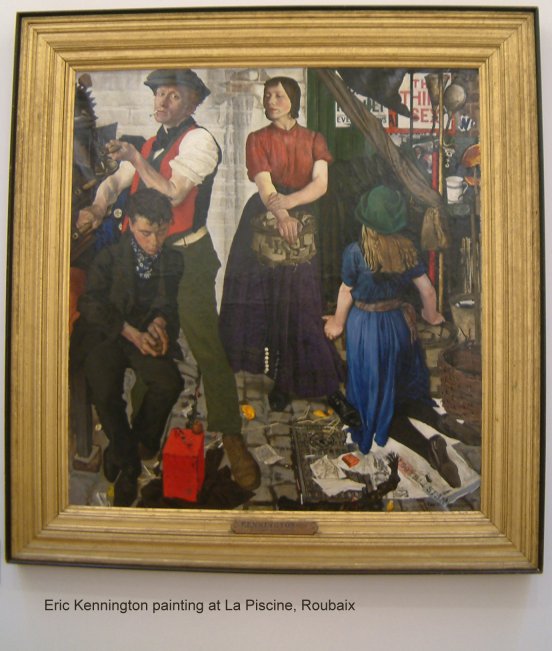 Nouvelle Cuisine.  But how disgusting it can be to have to read of the culinary experiences of others!

The Lille Museum of Fine Arts, one of the largest in France outside Paris, is full of good things, including long galleries of Renaissance and C.XIX paintings (some Watteaus, an extraordinary Goya, Van Dycks, and so on) and some fine sculptures.  We lacked the energy to get a bus to and from the Museum of Modern Art, slightly further away.  A day out at Rubaix, half an hour away on the tram and less on our return by Mtro (smart, driverless carriages that rattle along at a furious pace with a daunting view of the dark tunnel ahead from the leading coach) yielded little by way of bargains at the factory outlet shopping centre but a feast for the eyes at the amazing Museum of Art and Industry in a spectacular Art Deco building that was originally a beautifully tiled and decorated swimming bath, La Piscine, much of the original preserved with art displayed in the little dressing-cubicles and shower booths, sculptures along the edge of the remaining swimming-pool, and glorious sun-burst stained glass windows at either end.  The many fascinating oil paintings included one (illustrated here) by Eric Kennington, T E Lawrence’s companion in the desert, illustrator of the Seven Pillars of Wisdom and the sculptor of Lawrence’s splendid tomb.

Lille is much underrated, or so it seemed to us.  The ingenious achievement of its one-time Mayor and former French Prime Minister, Pierre Mauroy, in getting the EuroStar routed so that Lille would be the trains’ first stop after the Tunnel, has clearly transformed the city.  Before EuroStar, its fine municipal buildings and picturesque Old Town seemingly went largely unnoticed.  Now Lille is Europe’s City Of Culture for 2004 (twenty-O-four*) and for this it has put out the flags and the street decorations and lights with a vengeance.  Vaut le voyage!

PS: The innumerable beers of Flanders and nearby Belgium are excellent, both blondes and brunes.

* Who refers to the 1906 election as the one thousand, nine hundred and six election?

Visit a page of pictures of our Lille Christmas