Four Last Songs at the Prom

If April is the cruellest month (and I could never see why it should be), September, signalling the decline of summer and the approach of autumn, is surely the saddest.  So Strauss’s Four Last Songs at the BBC Prom on 4 September, almost always moving, were intensely so on this occasion, not just because of the deeply emotional 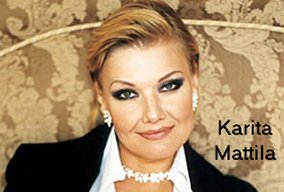 singing of the Finnish soprano Karita Mattila but especially because of the glorious, deeply-felt playing of the Berlin Philharmonic under their principal conductor, Liverpudlian Simon Rattle.  I listened to it first live on BBC Radio 3 and was initially uncertain about what seemed perhaps an excessive theatricality in Mattila’s singing.  I had taped it, and played it over a couple of times immediately afterwards. Each time it seemed more genuine and more intense.

A couple of hours later, the whole Prom was broadcast on BBC television, and now the experience of the Strauss songs was transformed by the sight as well as the sound of Mattila, Rattle and the marvellous orchestra.  What on radio had at first sounded suspiciously theatrical could now be heard as something deeply spiritual.  As the last glorious notes of the last of the four songs, “Im Abendrot” (At Sunset), almost literally died away, the intense hush before the start of the applause seemed to go on for ever, as if to break the spell by the slightest sound would have been unthinkable.  The applause, when it came, was rapturous – almost as emotional as at the end of the Mahler First Symphony the previous evening, also performed by Rattle and the Berliner Philharmoniker.  Karita Mattila, almost overcome by her thunderous reception as well, I suspect, as by spiritual exhaustion from singing this extraordinary music, hugged Simon Rattle and the leader of the orchestra again and again, half laughing and half crying, repeatedly miming her homage to the orchestra and her acknowledgement of the packed audience, as the applause rolled on and on.

I don’t think this was necessarily one of the great performances of Strauss’s valedictory.  The great sopranos of the age have almost all recorded it and many of the resulting disks are sublime.  But last night’s occasion at the Albert Hall, the work of a great German composer performed by a German orchestra, perhaps the greatest on the planet, under an outstanding British conductor and with a fine Finnish soprano, one day after the anniversary of Britain’s declaration of war on Hitler’s Germany, had a special resonance which seemed to be echoed in the emotional response of the enormous audience and the equally emotional reaction of the performers to it.  And it was September, title and theme of the second of the four songs.

The Vier letzte Lieder, Strauss’s last finished work, were composed in 1948 when the composer was 84, only three years after the end of the war which had imposed such a tempestuous and tragic experience on the whole German people[1], including not least on Richard Strauss himself. Strauss did not live to hear the world premiere, performed in London at this very same Royal Albert Hall, home of the Proms, on 22 May 1950 by the great Norwegian soprano Kirsten Flagstad accompanied by the Philharmonia Orchestra and conducted by Wilhelm Furtwängler, the celebrated and to some people infamous German conductor.   Furtwängler’s tortured relations with Hitler and the Nazis had forced him to take refuge in Switzerland almost at the end of the war, only five years before the London premiere of the Four Last Songs.  There is a moving account of the controversy surrounding Furtwängler’s attitude to the Nazis here.   History has, I think, fully acquitted him.

The BBC Proms website describes the Four Last Songs as “Strauss’s opulently nostalgic reflections on life’s last days”, but I don’t think that quite gets it.  The music is deeply sad, but also philosophical about the inevitable approach of death, and the last bars of the orchestral ending of the last song seem to signal, as clearly as only music can, peaceful acceptance, not nostalgia, not regret, no hint of any rage against the dying of the light.  In 1948, moreover,  ‘peace’ could not have referred only to the peace of death.  Rattle and this sensational band caught this perfectly.  I used to suspect that you needed to be over 65 truly to appreciate the Four Last Songs: better still, over 75.  But Rattle is a mere youthful 55, so I must be wrong.  His eight years (so far) conducting the Berliners have evidently welded them all together into a single organism and that must make up for his extreme youth.  All Brits should be proud that the members of this iconic orchestra  chose one of our own fellow-countrymen to lead them through good days and occasionally bad for the better part of a decade.  To hear a great British maestro conduct a great German orchestra with a splendid Finnish soprano in a German composer’s final masterpiece with so many tragic historical undertones was indeed a memorable experience.

[1] As well as on a few million others, of course.