Reading the papers and the blogs on Libya this week, I find myself increasingly going against the liberal bien-pensant grain.  For example, —

1.  I strongly disagree with the widespread sentiment voiced in last week’s Observer editorial that “doing nothing is not an option.”  On the contrary:  not only is “doing nothing” very much an option: it’s probably the only sensible option, anyway for now.  Any form of western physical intervention now would almost certainly do more harm than good.  The participation of the UK in any collective western intervention would be particularly mad.  Unilateral British intervention would be sheer criminal insanity.

2.  The growing chorus of voices in the mainstream media and the blogosphere which argue that “we” (who, exactly?) have a duty to take firm (i.e. military) action to save the democracy-loving people from Gaddafi’s bombs and bullets, even if there is no authority for intervention from the UN Security Council, is deeply irresponsible and reprehensible.  The disastrous failures of the illegal (because not UN-authorised) military adventures over Kosovo in 1999 and Iraq in 2003 should have taught us all a lesson in the need to uphold the rule of law in international as well as in domestic affairs.  The Responsibility to Protect (R2P) principles have been approved by the whole UN since 2005 and any attempt at by-passing them in favour of unauthorised military action by NATO, or a ‘coalition of the willing’, or a well-meaning Tory-LibDem coalition, would literally be criminal.

3.  Sending a group of SAS “special forces” with “a diplomat” covertly into rebel-held Benghazi on some ill-defined secret mission seems to indicate that someone in Whitehall has been reading too many adventure comics or James Bond stories.  No wonder some of them have been arrested.  Liam Fox, the defence secretary, told us gravely on television this morning that “we would understand” that he couldn’t tell us anything about this barmy adventure.  On the contrary, Secretary of State: having leaked some of the facts to the press, you have a duty to tell us what the hell you’re up to, especially now that it seems to have gone pear-shaped already.  When are we going to learn to mind our own business — especially now that our own business is being so catastrophically mismanaged?

4.  It’s nonsense for the 50 generals and other assorted defence experts to tell the government to rescind the defence cuts in view of the need for all those ships and aircraft for an intervention in Libya.  The utter folly of the cuts being made in the defence budget has nothing to do with Libya:  it’s the lunacy of being scared to abandon the British so-called independent nuclear deterrent, thereby saving billions of pounds urgently required for other real needs, when our ‘deterrent’ is not in the least independent and has noone to deter.

5.  The LSE’s programmes for training Libyans in the principles and practice of democracy were (or are?) extremely worth-while, especially as they were financed by Libyan oil money and thus were not at the expense of other LSE programmes.  The possibility of dozens of future Libyan leaders having spent time in London absorbing western political secular values at the LSE was one that the LSE was absolutely right to seize.  Nothing that has happened in Libya since puts the LSE in a bad light.  The LSE Director, Sir Howard Davies, should not have resigned.  He should be applauded.  By the same token, Blair should be applauded (for once) for having established mutually beneficial commercial relations with Gaddafi’s Libya in exchange for Gaddafi terminating his support for the IRA and other terrorists. 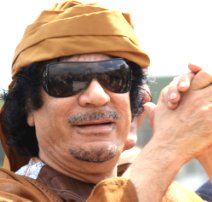 6.  It’s far from obvious that a significant majority of Libyans want to get rid of Gaddafi.  He seems to have substantial support in and around Tripoli where the majority of the population live.  Of course it may turn out that so many Libyans want him out that his position will eventually prove unsustainable:  but that remains to be seen.  The complexities of the Libyan clan system and the fact that Gaddafi, unlike Mubarak, can still rely on the loyalty and support of substantial elements of armed forces of various kinds, make the advocates of intervention on the side of “the people” against “the tyrant” look impossibly simple-minded.  We have stupidly referred Gaddafi to the International Criminal Court and thereby lost any hope that the old brute, if once cornered, will flee Libya and seek asylum abroad, so we have only ourselves to thank if he sticks it out to the bitter end and the last drop of Libyan blood, or (perhaps more likely) fights his enemies to a standstill and an effectively permanent stalemate.  Or he might even win.

7.  It’s much too early to assume that whatever régimes emerge eventually from the current confusions in Egypt, Tunisia, Libya and other countries in the region where popular protests are growing will be any more democratic, peaceful, moderate or committed to human rights and good governance than their predecessors.  The new régimes seem very likely to be strongly nationalistic, to incorporate Islamist elements, to be hostile to the west generally and to the United States and Israel in particular, and — initially at least — to be greatly strengthened by the legitimacy that will come from widespread popular support.  General liberal rejoicing at the multiplying fall of tyrants is seriously premature.

8. Uncertainties about the future of oil supplies from Libya and perhaps other middle eastern oil-producing countries, especially Saudi Arabia, are already driving up world oil prices to new heights.  A new oil shock, coming on top of the still feeble signs of recovery in the west from the crises of the banking collapse and deep recession, seems very likely to push the west back into a new and even more severe recession or even a global slump.  If the monarchy in Saudi Arabia seems to be seriously threatened, that likelihood may become a certainty.  We’d better hold on to our hats — and drain our tanks.

9.  If the eventual emergence of popular, nationalistic, anti-western, anti-American, anti-Israel, Islamist-influenced or Islamist-dominated régimes around the region were to look like threatening (a) United States secure access to middle east oil, or (b) the continued existence of Israel as an independent Jewish state, or (c) both, no US administration in Washington, however liberal and enlightened, would be able to avoid military intervention in defence of what would be seen in the Congress and by much American public opinion as America’s vital interests (correctly, in the case of oil).  Such intervention could set the whole of the middle east on fire, drawing in other powers with vital interests at stake including Russia, Pakistan and India, China, and perhaps the rest of NATO including Britain and France — meaning the possible involvement of no fewer than seven nuclear-weapon states; eight, if we include Israel.  It would make the cold war seem like a tea party.  (No, not that Tea Party.)

10.  Of course the majority of the leaders of all the major countries involved have an overwhelming interest in averting that kind of Armageddon, and the oil-producers have got to sell their oil to someone.  But many of the dangers I foresee are more likely to materialise than not, and if that’s so, the general welcome given by liberal opinion to events in the Arab world in recent weeks may prove to have been hopelessly misplaced.

That’s enough unpopular thoughts to be going on with.  Don’t all shout at once!

Update:  On para 3, about the UK’s SAS “diplomatic team” in Benghazi, the panel comment by Jon Leyne inset in http://www.bbc.co.uk/news/world-middle-east-12658054 is an especially hilarious read, although the operation itself looks anything but hilarious and I suspect we’ll be lucky if it doesn’t end in tears, or worse.

Update 2 (18:30 6 March): The arrival by helicopter in the dark of the British ‘diplomat’ with his armed SAS protection team, hoping apparently to establish contact with the Libyan rebels, has ended in farce (which is admittedly better than tragedy).  Libyan security guards found they were carrying arms, ammunition, explosives, maps and passports from at least four different nationalities, witnesses told the BBC.  The SAS team has been released by the understandably suspicious rebels (who might well have shot them as spies) and after a pathetic telephone appeal by the British ambassador to Libya from his gardening leave in the UK, gleefully broadcast on Libyan television and now available on the BBC website, the team has been allowed to leave on board the Royal Navy frigate HMS Cumberland that had docked in Benghazi, presumably to ‘rescue’ it.

‘The BBC’s Jon Leyne, who is in Benghazi, says the British mission appeared to have been an “embarrassing miscalculation”.  He said the UK was “obviously unaware of the reaction likely to be provoked in this tense situation by a group of armed men arriving on a helicopter, in the dead of night”.’

It’s legitimate to speculate about the IQs of whichever geniuses dreamed up this asinine project, and indeed of whichever ministers presumably approved it.  A ministerial resignation to atone for this national humiliation might be in order?