An old friend, Robin Fairlie, shares his memories of his time at Fettes

I went to Fettes at age 12; that wouldn’t be abnormal now, but then made me easily the youngest boy in the school, and, added to an unusual (even for a 12-year old) level of naïveté, made my first year a purgatory. Not that I was bullied – surprisingly – merely that I was continually and hopelessly out of step. My second year was somewhat better, and after that I quite enjoyed the place.

One of my strongest memories is from the summer of my second year, when long breaks between School Certificate papers were enlivened by an active pontoon school. Much later we graduated to poker, but a friend and contemporary became much too good at it, and the rest of us had to give it up.

Beatings, particularly of me during my first three years, were fairly frequent; I can’t recall that they ever did any harm – or, indeed, any good to the beaten or the beaters. Anything akin to sadism, or any other form of abuse, I did not, thank goodness ever see; I have always since regarded exaggerated concern about such things as hysterical nonsense. While I would not advocate the return of the cane to schools, I greatly regret the untrammelled anti-authority movement of which its abolition is a part. If Dotheboys Hall was one end of the pendulum’s swing, our society’s present child-centred attitudes, and constant attention to supposed rights as distinct from responsibilities (leave alone that taboo concept duties) are the other. I suppose my own experience as a child was somewhere in the middle, and I am, on the whole, grateful for it. 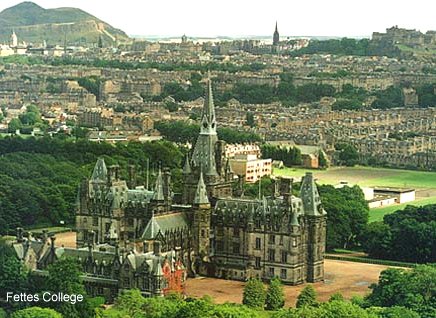 I did attend chemistry and physics classes in my first year – with total bewilderment as the only boy who had never before been exposed to either – and immediately after dropped both with relief. After 14 ½ lessons were entirely Latin Greek and Ancient History (oh, apart from having to re-sit my School Cert maths twice) plus some subsidiary French (Athalie et Andromaque, engendering a considerable dislike of Racine). And, unlike your case, the Upper Sixth did have a current affairs/economics class once a week. After two years National Service I had forgotten all my (sparse) Greek, and most of my Latin, so had to read History at Cambridge as one of the very few subjects one didn’t have to know anything about in advance in order to read for a degree.

I can’t complain about the education; after all the school did push me, despite considerable resistance from me, to an exhibition at Cambridge (where, without said exhibition, I couldn’t have gone). But probably a good deal was down to the luck of finding myself in the company of some rather talented contemporaries. That same luck meant that I was involved, for my last two years, in the production of a weekly 24-page unofficial magazine. In retrospect I realized rather late that it was only a very tolerant Headmaster that prevented two of us from being summarily expelled on this count after perhaps a dozen issues; thereafter all material had to be vetted by him before printing – which made it less unofficial, but less scabrous, and a lot less dangerous to its editors.

Said Headmaster (Crichton-Miller) had the odd effect of terrifying all his staff, but none of the pupils, who liked and admired him. He seems to have had a much rougher time subsequently at Stowe, or some such inferior place where he injudiciously went after Fettes.

I agree about the music – or anyway the singing. I sang (very mediocrely) every single part from treble to bass in The Messiah, as well as appearing as a juror in Trial by Jury, and numerous other productions. I also compered a rather good jazz band. The sad thing, for those like myself with little in the way of a musical ear, was that we received no basic instruction in musical theory. (Hmm, I’d probably have been bored.) 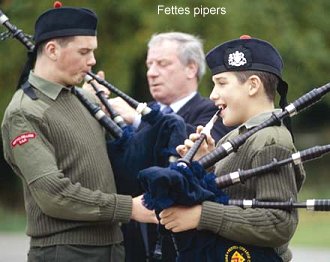 I recall clearly the appalling ignorance, prejudice and spite surrounding all matters political. Which I would probably have been a part of, at least until much later, had my political education not been taken in hand by a couple of friends. I think by the time we left Fettes was becoming a less illiberal place, but I doubt this was to the credit of the school, being more due to the accident of acquiring a few boys from backgrounds less than wholly benighted.

The compulsory games were, at the time, a terrible bore – but a great improvement on selling off school playing fields in the modern manner. And it has left me, I’m afraid, with an ineradicable passion for watching rugby and cricket matches, which certainly marks me out from my equally unathletic contemporaries. As for the Corps, it was unspeakable – until at least I was promoted to Sergeant and became a Person of Authority, whereupon my pacifist tendencies took a rapid back seat.

I wish I had had the sense to switch to History at university like you.  Or even Economics, although I suppose I’d have been disqualified from that by the incompatibility between maths and me.  I was deterred from switching subjects by fear that my enjoyment of extra-mural activities at university might be hampered by having to spend precious time swotting up a whole lot of new and unfamiliar stuff.  We all started specialising at school far, far too early.  I suppose it was dictated by the schools’ single-minded pursuit of Oxbridge scholarships.  Good for recruitment, even in those far-off days when it was quite easy to get in to an Oxford or Cambridge college (not necessarily a good one, of course) if you had a posh accent.  Now a posh accent disqualifies candidates even if they have 25 A’s at A Level.

I’m intrigued that you support the views of the Heir to the Throne about the regrettable child-centredness of the current education system (although I realise that’s not quite what you say).  I suppose old-fashioned schoolmasters and -mistresses think that education should be teacher-centred, or God-centred, or something, although I can’t imagine why anyone else should agree.  What you have written is magnificently provocative.  I bet your unofficial weekly magazine was, too.  I was one of the three editors of The Shirburnian, the official school magazine, for the six issues of my last two years at Sherborne and loved doing it, always trying to be controversial and heretical (as self-respecting adolescents and senior citizens ought to be) and generally getting away with it.  It’s unbelievable in retrospect that our copy didn’t have to be approved beforehand by Them in Authority.  After one particularly provocative Editorial, I was summoned to the study of my House Tutor, the celebrated Mickey Walford (mentioned in the Sherborne piece on my website), who stared at me for what seemed an age, his honest and athletic brows contorted by bewilderment, before saying, almost pleading:  “Barder, don’t you feel any loyalty to the House and the School?” I was  pretty cagey in my reply, having very much in mind that MMW (Somerset and England) used a famously fearsome back-hand when applying the cane, something that I had no wish at all to verify at first hand.

Which reminds me of my first Positive Security Vetting interview after I joined the civil service, when my loyalty and reliability were probed by a retired army major who was deeply puzzled by my worrying record (former Chairman of the university Labour Club, author of anti-Suez letter in the Manchester Guardian, etc.).  After we had fenced around for a while, he leaned forward and asked in an intense voice:  “Mr Barder, do you believe in the Royal Family?” I would like to think that I replied that I had almost no doubt as to the existence of the Royal Family, but since I was granted my security clearance, I suppose I can’t have done.