More random thoughts for the weekend

An old friend, an inexplicably obsessive cricket fanatic, has just telephoned in a state of high excitement about the collapse today of the fourth Test match between England and Pakistan.  My first thought was that the Pakistanis must have walked off in protest at racist insults from the spectators.  Happily it turns out that they had not walked off at all: they had declined to walk on after the tea interval, in protest against the (Australian) umpire's accusation that they had illegally tampered with the ball, and his action in taking it away and making them play with a new one.  When the Pakistanis failed to come on after tea, the umpires waited for the statutory two minutes and then removed the bails, signalling the end of the match.  It has now been announced that the umpires had acted correctly and that by its failure to appear when play was supposed to resume, the Pakistani team had forfeited the match.

There are various ironies in all this:  Pakistan was well placed to win the match, had it continued;  relations between the Pakistani and England teams have been (and apparently remain) extremely cordial; at one point the Pakistanis trooped out onto the field to signal their willingness to resume play, but neither the umpires nor the England batsmen followed them out, so they returned to the pavilion; the Australian umpire has, I'm told, a history of controversy in other matches over which he has officiated — but in this case he apparently has the backing of cricket's international governing body, the ICC (don't ask me what that stands for) so presumably he will continue to umpire matches elsewhere, leaving a trail of drama behind him.

There's evidently an element of farce in this mini-saga, but it's very sad for Britain's large Pakistani population (including very many Brits of Pakistani parentage or grand-parentage), already feeling somewhat battered by Pakistan's ambiguous role in the so-called war on terror.  But I confess that the heart sinks a little at the prospect of weeks of post mortem all over the media, with the experts ponderously comparing today's events with long forgotten cricket controversies involving Wally Hammond and Ranjitsinji in 1906.

Hats tipped to Tony's 'Retired Rambler' blog — no, not that Tony — for his comments on the extraordinary story of the passengers on a flight due out of Malaga for Manchester who refused to remain on board in the company of two fellow-passengers "reported to be of Asian or Middle Eastern appearance" who they thought were behaving suspiciously, although according to some accounts they were doing nothing more suspicious than sweating heavily.  The two men were removed from the aircraft, "questioned for several hours" (according to the BBC report) and eventually allowed to board a later flight.

For some reason this dreadful episode reminds me of the weekend Financial Times's interesting survey of the situation in a number of countries' airports as regards the draconian restrictions on permissible cabin baggage following the revelation of the UK plot to bomb aircraft flying between the UK and the US.  According to the FT, British airports (as of 18 August) were "back to a near-normal service… Passengers boarding at UK airports may carry one laptop-sized case as hand baggage. They cannot take liquids aboard."  In Spain

"the new restrictions apply only to flights to the UK, US or Puerto Rico. Passengers have to check in three hours before departure and have shoes and hand luggage X-rayed at the boarding gate.  They can carry no liquids or gels except for milk and juice for babies, and medicines. … Iberia said those restrictions, and the 45cm by 35cm by 16cm size limit for carry-on bags, applied to flights bound for Argentina as well as the US, UK and Puerto Rico."

"yada yada, int. and n. DRAFT ENTRY June 2006
colloq. (chiefly U.S.).
A. int.    Indicating (usually dismissively) that further details are predictable or evident from what has preceded: ‘and so on’, ‘blah blah blah’.
B. n.    Trivial, meaningless, or uninteresting talk or writing; chatter. Cf. BLAH n.
Example [one of several — BLB]:  2005 Hoosier Times (Bloomington, Indiana) (Herald-Times ed.) 20 Mar. F5/5 The EULA, or ‘End-User License Agreement’, is the yadda yadda yadda that you agree to when you install software on your computer. It's usually pages and pages of stuff that no one reads."

I'm baffled by the huge fuss over the German novelist and Nobel Literature prize-winner Gunter Grass's admittedly belated revelation that he had been recruited as a teenager, in the final months of the second world war, into the Waffen SS, the élite fighting arm of Hitler's SS.  Grass says, credibly, that he never fired a shot and there's not the slightest suggestion that he personally participated in any of the criminal activity for which the SS was notorious.  What makes the whole thing even more mysterious (to me, anyway) is that Grass has never made any secret of the fact that earlier in his teens he was a keen 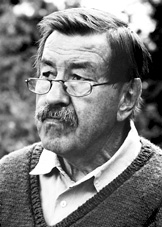 Nazi and a member of the Hitler Youth.  Since he was later compulsorily drafted into the Waffen SS, that fact doesn't seem to me materially to affect what was already known, nor to make it significantly worse.  Many commentators in Germany are nevertheless saying that the huge moral authority built up by Grass, not only through his novels and other writings but also through his political activism, as the conscience of Germany and the scourge of those who were reluctant to come to terms with the Nazi past, has been ruined by the discovery that he, of all people, has hitherto kept secret the facts about his membership of the SS.  Others have rallied to his defence.

I can't see that the massive reputation of, especially, The Tin Drum can be affected by the SS revelation.  Nor am I a big fan of the contemporary morality that requires all of us to reveal every dubious detail of our private lives and murky pasts, on pain of being dismissed as frauds and hypocrites if we hold back on anything.  To be on the safe side, I had better come clean now about my brief career, if you can call it that, as a National Service soldier in the 7th Royal Tank Regiment, serving in what was then the British Crown Colony of Hong Kong with the task and duty of defending that territory against the Chinese hordes.  In my own defence I can only plead that I was remarkably successful in carrying out this onerous military task:  it was only after I had left the place that Hong Kong fell into Chinese hands.  I can't think why I didn't get a medal.  Perhaps, though, it explains the lenient view I'm inclined to take of Gunter Grass's similar indiscretion.