(1)  Gross overcrowding in our prisons has been a major problem for years.  It contributes to the inhuman conditions in many of our jails, obstructs rehabilitation and thus promotes re-offending, consequently doing incalculable harm to both prisoners and society. It demoralises both prisoners and prison officers and frustrates probation officers. It is phenomenally expensive compared with any other kind of treatment of offenders.  And we imprison a higher proportion of our population than any other comparable western country except the United States (with the highest percentage in the whole world), Luxembourg and (surprisingly) New Zealand, according to the 2005-2006 statistics (PDF file).

(2)  A very large number of the people now imprisoned in Britain ought not to be in prison at all:  many are there primarily because of their drug or alcohol addiction, or psychological problems, illiteracy and other educational inadequacy, or other kinds of inability to adapt to life in society, all of them conditions best treated outside rather than inside prison;  rates of re-offending are sky-high, demonstrating that prison in current conditions doesn't work (except in the primitive sense that a person in prison can't commit offences in society until he or she is released); and in particular people serving very short sentences — less than a year, say — generally derive no benefit from their imprisonment and their imprisonment confers no benefit on society.

You might think that putting these two truisms, neither of which is seriously disputed by anyone except possibly those who write and read the Daily Mail, together leads to an obvious and irresistible conclusion: namely that the solution to the problem of prison overcrowding is to remove from the prisons a sizeable number of people now in them, arranging for their problems to be addressed in other ways, and to ensure that far fewer people are sent to prison in future.  You might also think that no superhuman courage is required on the part of our political leaders to proclaim these elementary facts, to propound the obvious solution, and to put it into effect.  Unfortunately neither of these suppositions seems to hold good in the weird and frightened world of Whitehall and Westminster, where pandering to the tabloids' reactionary prejudices supersedes decency, common sense and logic:

The Home Office is working to find solutions as prison populations rise.  In July, Home Secretary John Reid announced plans to build 8,000 new prison places to cope with rising prison populations. The first 900 of these new places will be ready by Autumn 2007, but before then there's an immediate demand for more space.  To keep the public safe, it is critical that those who are convicted of crime – particularly of violent crime – serve their sentences behind bars, so room must be found for all of them. (October 2006, Home Office website)

Three "super-prisons" each housing about 2,500 offenders are to be built, Justice Secretary Jack Straw has said.  Following a review of overcrowding in jails, he said a building programme would take prison place numbers up to 96,000 from the current 81,000 by 2014.  … The building programme … would cost an extra £1.2bn on top of the current £1.5bn, Mr Straw said. … One of the so-called Titan jails, which will be larger than any prison currently used in Britain, will be in service by 2012.  The other two are expected to be built by 2014.  He suggested they should be built in London, the West Midlands and the north-west of England.  [BBC news report, 5 December 2007]

Everyone with any claim to an expert view on the matter agrees that the prison population needs to be significantly reduced and that building more and more prisons is no solution, especially when the new prisons are to be so huge:  all the evidence shows that the smaller prisons achieve much better results than the big person-warehouses (none of the existing ones being as vast as Mr Straw's proposed Titan jails).  Successive Chief inspectors of Prisons, Lord Chief Justices and other judges, the Howard League for Penal Reform, the prisons' Independent Monitoring Boards, all recognise the logic of the situation and plead for a radical reduction in prisoner numbers as an infinitely superior solution to the knee-jerk, tabloid-appeasing alternative of simply building more and bigger prisons.  Tony Hatfield, retired solicitor and blogger, who knows whereof he speaks, puts much of the blame for the unnecessarily swollen prison population on the magistracy, which persists in sending more and more minor offenders to prison for uselessly short terms (his supporting facts and figures here).

Or here is the Howard League on the impact of prison over-crowding:

It's understandable in a way that relevant recent ministers of the limited capacity of, e.g., Michael Howard, David Blunkett and John Reid should be incapable of overcoming the promptings of the tabloids and their own baser instincts by doing what's so obviously the right and necessary thing.  Charles Clarke might possibly have summoned up the necessary intestinal fortitude to set about reducing the prison population, had he not been banished from office by an ever-timid Tony Blair (over the relatively minor issue of failing to deport foreigners convicted of offences).  Jack Straw, ubiquitous and indestructible as ever, is no fool and has even admitted that he knows what ought to be done:

The Government will not be able to build its way out of the prison crisis, Jack Straw suggested yesterday. He indicated that the only way the pressure could be relieved was by sending fewer people to jail and using more noncustodial sentences. (The Times, 12 July 2007) 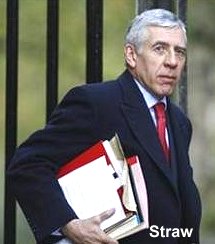 prison population continues to break all records month by month.  By what intellectual gymnastics does Mr Straw justify this resounding failure to do what he knows to be the right and obvious thing?  (The same gymnastics, no doubt, as those which allowed him to remain in office as Foreign & Commonwealth Secretary at the time of the aggression against Iraq after his own department's legal advisers had warned him that the attack would be illegal, indeed a war crime.)

Prison over-crowding is a major national disgrace.  The solution to the problem is obvious, conforms to the evidence, saves money, benefits society, is favoured by the experts and professionals concerned, and represents a humane and practical course of action.  So what's the matter with these people who rule our country?