Anyone interested in international affairs generally, and the criminal behaviour of some western governments in particular, ought to go and see the new American film Rendition, now on general release.

Nearly a year ago I wrote in this blog about the American practice of Extraordinary Rendition, the polite name for the CIA habit of kidnapping foreigners (including British citizens), usually in countries other than the US, and clandestinely flying them, blindfolded and shackled, to countries where torture is routinely practised and where the victim can be more, um, forcefully interrogated than would be prudent within the jurisdiction of the US courts — all this on the mere suspicion, sometimes later revealed to have been unfounded, of involvement with terrorism.  The whole thing is exhaustively chronicled and analysed, and the damning evidence set out, in the indispensable book Ghost Plane by the man who has done more than anyone else to expose this gruesome activity, Stephen Grey.  And it's made much more unpalatable still by the cogent evidence, some of it from leaked documents, that our own (British) government has knowingly connived at it.

Now comes the first film on the subject, appropriately entitled Rendition.  It's directed by the South African-born Gavin Hood (this seems to be South Africa's week) and stars the 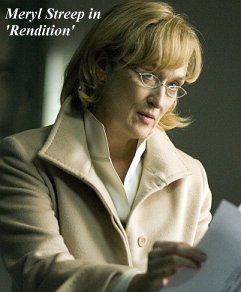 always dependable Meryl Streep, here in a chilling role as the head CIA renditioner, with Reese Witherspoon, Jake Gyllenhaal (one of the gay shepherds in the seriously overrated Brokeback Mountain), and several equally excellent actors of middle eastern extraction.  'Anwar', the victim of rendition in the film, is an amalgam of real-life rendition victims, many of whose experiences are described in detail in Stephen Grey's book, so the main plot is disturbingly realistic.  The country in which the film's victim is interrogated under torture (and even the details of the torture used are well documented) is identified only as being in North Africa, but parts of the film were shot in Morocco and a document briefly shown mentions Tunisia:  however, we can take it that the location at least is fictitious.

There's no need to write a full review of the film here:  the Los Angeles Times, among many others, carried a very good one just three days ago when Rendition opened in the States, and I recommend it.   But British reviewers have in some cases been surprisingly lukewarm, on grounds that seem to me mistaken.  Peter Bradshaw, usually a perceptive and reliable critic, was grudging in his praise for the movie in the Guardian, but concluded on a harshly negative note:

But infuriatingly, the movie fudges the most important issue, with a fundamental flaw that goes to the heart of the matter: the question of whether the CIA's phone-record evidence against Anwar is sound or not. If it's all just a mistake, then how can such a mistake be made? The question is not satisfactorily answered, and the sleight-of-hand intended to distract you from this fact simply fails to work.

But surely this ambiguity, far from being a 'fundamental flaw', itself 'goes to the heart of the matter':  in so many of the cases of extraordinary rendition by the CIA, we have no way of knowing whether the CIA's 'evidence' against the terrorist 'suspect' is sound or not.  That evidence is virtually never tested in an impartial court of law, and the intense suffering and disruption of life inflicted on the victim may well be unjustified even on the most cynical and self-serving interpretations of the international law against torture.  We want to believe that Anwar, the rendition victim in the movie, is wholly innocent:  but we can never be one hundred per cent sure.  And that's more true to life than the definite acquittal for which Mr Bradshaw seems to hanker, an essentially more sentimental hankering than the film or real life can usually satisfy.

The reviewers in last Friday's Newsnight Review (BBC 2 television) were similarly lukewarm, complaining that the sub-plot, which concerns the lives and relationships of the Arab families and associates of the principal local interrogator acting on behalf of the CIA, was unrealistically 'melodramatic'.  I must avoid a spoiler here, which might detract from the enjoyment of the film by those who haven't yet seen it, so it's enough to explain that the sub-plot describes the complex events surrounding a suicide bombing, its organisers and perpetrator and their relations with its main intended victim;  and all this is ingeniously tied in with the main plot (the rendition) by a surprise twist that to my mind comes off brilliantly.  To complain that such events are 'too melodramatic' is surely to complain that people in the real world whose lives are wrecked, one way or another, by terrorism are themselves involved in too much melodrama.  The complaint seems to reflect a certain squeamishness about recognising unpleasantness.  The film, by contrast, faces the unpleasantness with unflinching realism.  It's not always easy to watch, but it needs to be seen.

which is a bit like saying that a murder story is too heavily loaded against murder to make it exciting.  Comment is surely superfluous.

"Maintain your rage," Gough Whitlam told the crowd outside the Australian parliament building in Canberra immediately after being unconstitutionally deposed as Australian Labor Party prime minister by a scheming Governor-General in 1975.  Half at least of the Australian people complied, maintaining their rage until the Governor-General went into exile — and beyond.  Watching Rendition, the movie, is a good way to maintain your rage against this ugly excrescence on the international scene.  And it's a first-class movie, too.

Tailpiece:  J. and I saw the film at a free preview for which tickets were provided to those responding to a newspaper advertisement.  The preview was at the Empire Leicester Square in London, where the floor of the auditorium is so inadequately raked that it was impossible for most of the audience to see over the heads of the people in front, restricting the view to the area of the screen between heads, and involving the need for constant swaying from side to side in the attempt to see round them.  Since much of the dialogue of Rendition is in Arabic with long English subtitles, and the screen, in the current fashion, is about a quarter of a mile wide, it was physically impossible to read all the subtitles, which certainly served to intensify the suspense by limiting one's comprehension of what was going on.  But as we hadn't paid to see the film, we could hardly complain.  We went on afterwards to a well-known restaurant in London's Chinatown, just behind the cinema, where at the end of our meal I was constrained to tell the head waiter, in what I hope was a moderate and amicable tone, that while the food had been terrible, the service had been worse.  (He laughed, I hope with embarrassment.)  It was indeed the worst Chinese food that we have ever encountered in many decades of eating Chinese in, probably, a score of different countries.  Still, the film was well worth seeing.  Please don't miss it.  But if you eat Chinese afterwards, it's prudent to stick to a restaurant that's in the current Good Food Guide.

Update (22 October 07):  Stephen Grey — now see his interesting comment below — points out in a private message that he has referred to the film Rendition in a longer piece in the New Statesman about the developing story of Extraordinary Rendition and the way even our MPs conspire with the British government to pretend that it doesn't exist because the Americans deny that they practise or condone torture.