The results of the elections to the Scottish parliament, held on 3 May 2007 under a spectacularly complicated form of Proportional Representation (PR), have created a more chaotic situation than even the most vigorous critics of PR — such as me — could have predicted.  Contrary to the opinion polls before the election, which promised the Scottish National Party with its programme of independence for Scotland a decisive lead over Labour, in the end the SNP was only one seat ahead with 47 to Labour's 46, making it the biggest single party, but only just.

The assumption had been that no one party would win an overall majority in the new parliament, which proved correct, but that either the SNP or perhaps Labour would be able to command an overall majority by recruiting the LibDems into a coalition — which did not prove correct, since the Lib Dems couldn't achieve an overall majority (requiring 65 seats or more) by adding their 16 to either the SNP's 47 or the Labour Party's 46.  As a result, an overall majority for a new Scottish government now requires a coalition or at least an alliance of at least three of the parties.  The Lib Dems have not made the horse-trading (which customarily follows a PR election to a government-forming assembly) any easier by declaring that they won't go into a coalition with either the SNP (unless its lively leader, Alex Salmond, drops his key policy of holding a referendum on Scottish independence during the life of the current parliament), or with Labour, its senior coalition partner in government until the election.  This makes the formation of a workable coalition almost impossible, unless we can imagine a German-style 'rainbow coalition' of Labour (46) plus the Conservatives (17) plus either the two Greens or the [three] independents [actually only one independent, so still not enough for an overall majority — see Comment below] or some combination of these, sufficient to bring the total up to 65 or more.  Such a coalition would find it hard to agree on almost any policies whatever, apart from keeping the SNP out and opposing its proposal for a referendum on independence.  But since the SNP doesn't in any case have the votes to get the legislation for a referendum through the parliament, the agonising compromises required by all the partners in a rainbow coalition wouldn't seem to be justified.  Anyway, neither the Greens nor the independents seem likely to share the tent with the Tories, or even indeed with Labour.  Moreover, a coalition of natural enemies designed to deprive the biggest single party of the chance to form a government would seem to much of Scottish public opinion to be a dirty trick, whatever the arithmetic. 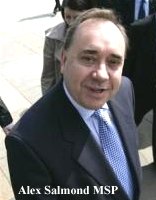 Unless the Lib Dems relent and join the SNP and (probably) the Greens in a coalition, it now appears likely that Mr Salmond will try to form a minority SNP government which will not command an overall majority in the parliament, and so will be forced to negotiate with other parties over every major policy initiative or piece of legislation in order to cobble together an ad hoc majority, issue by issue.  The result, if it works at all, will be a patchwork quilt of unpredictable policies, collectively incoherent and unrelated to any single party's manifesto commitments for which Scottish voters voted.  Since any proposal by the minority government will be subject to the veto of almost any combination of two other parties (or more), nothing remotely radical or controversial will get through.  Policy outcomes will reflect the lowest common denominator of consensus, a recipe for almost no change in any direction.  And it will depend on superhuman restraint on the part of the other parties in not putting down a vote of No Confidence in the SNP government which, if carried, would force the Salmond administration to resign. (This would not necessarily lead to fresh elections, especially if it happened soon, since the Labour leader could still try to put together a coalition in place of the SNP's minority government.)  But if within 28 days of polling day Salmond fails to form a government able to win an initial vote of confidence (the Lib Dems and perhaps Labour probably abstaining in order not to wreck the enterprise right at the outset), fresh elections will have to be held — quite possibly leading to the same stalemate.

The implications of all this for both the Liberal Democrats  (with the rude awakening from their dreams, not of winning the election, but of finding themselves king-makers, a perfectly understandable if disreputable ambition for the party in third or fourth place in a PR election) and for Proportional Representation generally, are spelled out by the ever reliable Simon Jenkins in a magnificent philippic in the Guardian of 9 May with the stimulating title: Nice but hopeless, the Lib Dems should call it a day.  This has predictably prompted loud cries of unconvincing protest from the PR fanatics, including notably the inexhaustible Polly Toynbee and the so-called Electoral Reform Society, both seeking to persuade us that the kind of aimless, inconsistent ad-hockery which PR has wished on the unfortunate Scots in lieu of coherent government is somehow preferable to government by a single party which can be held accountable to the electorate for the fulfilment of its election promises — the commonest outcome of elections by First Past the Post.

With the future of the United Kingdom and its union between Scotland and England in the balance, these are not matters to be lightly dismissed.  A party bent on Scottish secession from the UK has emerged as the biggest party in a democratic election.  The consolation is that the parties opposed to secession comfortably outvoted the SNP.  But with the current PR system, and the possible permutations and deals leading to the formation of a government so hopelessly uncertain, anything could happen.

As if this potentially disastrous situation were not bad enough, there's the added consideration that the PR system used for the Scottish parliament is almost unintelligible. One of the conditions of a functioning democracy is that ordinary people should be able to understand the system used to choose a legislature and a government:  if they can't, it's impossible for them to make rational choices about how best to vote. Contrary to much media theorising and a large number of spoiled ballot papers, the ballot papers themselves are simple enough.  But you need to be a Senior Wrangler to understand the way they are counted to produce the result:

The formula used for deciding which parties win regional top-up seats is known as the d’Hondt system. First, party list votes are totalled from each of the constituencies making up the region.These totals are then divided by the number of constituency seats each party has won, plus one. The party with the highest total after this calculation elects one additional member. That party’s divisor is then increased by one (because of its victory in the first round) and new figures calculated.  Again, the party with the highest total wins a seat.  The process is then repeated until all seven additional members are elected.

Under the d’Hondt system, it is intended that the parties which perform well in terms of constituency votes, but fail to translate that success into elected constituency members, will be rewarded via the additional member system. Conversely, parties which do well in terms of securing constituencies, will win fewer top-up seats.  The effects of the AMS system are best illustrated by example.  In Lothian [in the previous elections] Labour obtained 6 seats with 35.4% of the constituency vote. The SNP on the other hand gained no constituency seats in Lothian despite obtaining 21.1% of the constituency votes. The “top-up” seats aim to rectify this disproportionality; however, with over half of the seats allocated by the FPTP system,the regional vote cannot fully compensate for disproportionality on the constituency vote. Thus of the 16 seats available in Lothian, the Labour Party obtained 6 seats or 38% of the available seats. The SNP were not allocated any seats from the Lothian constituency vote, but gained 2 seats from the Lothian regional list equating to 12.5% of the total available seats in Lothian, correcting some but not all of the over-representation of Labour in the first vote. [http://tinyurl.com/2pvnlm (PDF file)]