On facing pages of Wednesday's Guardian (24.5.06), Simon Jenkins, a past editor of The Times, and Ronald Dworkin, Bentham professor of law at University College London and eminent philosopher, between them make mincemeat of New Labour's style of government and multiple costly failures (the Jenkins article), and of the prime minister's catastrophic misconception of the role of human rights in a just and secure society (Dworkin). Simon Jenkins documents with icy precision the disastrous ways in which New Labour has carried to new depths of miscalculation their enthusiastic programme of Thatcherite privatisations, and the exorbitant cost to the public purse and the public interest that these have entailed. He shows how nonsensical new directorates and units for 'delivering' ever more far-fetched objectives and targets have proliferated in departments across Whitehall in response to the never-ending stream of ministerial demands, many of them designed solely as responses to ignorant campaigns in the more reactionary tabloids.

Among the causes of this virtual collapse of rational government, Jenkins cites:

…too much intervention, too much "initiativitis", too many consultants, too many demoralised managers, too many targets and nothing ever joined up. The evil is not size – big and small departments are equally at sea. There is plainly overcentralisation. The government has seized every corner of the public sector and polluted it with the political short term. But where to go next? To suggest a grand, old-fashioned royal commission to find an answer might seem banal. But all the political community is doing at present is howling at the moon. There must be a case for someone to stand back from the frenzy and ask where that once-great institution, British public administration, went completely off the rails.

One answer to Jenkins's sad question must be that the process of dismantling our once unified, transparent, accountable public service was begun by Mrs Thatcher, enthusiastically abetted by her political foe, Michael Heseltine. Both of them systematically tore up virtually every one of the principles established by the great Northcote-Trevelyan reforms [pdf file] of 1853. After Labour's glad confident morning in 1997, a new ministry of whose members hardly anyone had any experience of ministerial office, led by a prime minister blessed, or cursed, with an impenetrable confidence in his own judgement and political skills, continued the process begun under Thatcher to disastrous effect. I have commented elsewhere on the catalogue of sloppy government procedures and cut corners revealed by the Butler report, Sir Robin Butler's 2004 review of the intelligence failures leading to the Iraq débacle of 2003: but it was Sir Robin Butler himself, as he then was, the first Cabinet Secretary and Head of the Civil Service to serve the new Blair administration, who must surely bear some of the responsibility, along with his successors, for his failure to insist from the earliest days, when Blair was still learning his ministerial trade, on ministers following proper procedures: taking decisions in properly minuted meetings, ensuring that responsible departments and their ministers participate in decision-making that affects their portfolios, using the Cabinet and Cabinet committees to ensure that the doctrine of collective responsibility is safeguarded, drawing on the expertise, experience and judgement of civil servants even if their recommendations and criticisms are ultimately rejected, giving ministers in charge of departments enough elbow-room to develop and execute policy without constant nagging and interference from No. 10, resisting the temptation to give too big a role to young and inexperienced political advisers and public relations spinners from the prime minister's own Press Secretary downwards, relegating day-to-day pressures from the 24-hour media and the itch to satisfy their demands to their proper place, low in the hierarchy of government priorities. Unless all these elementary rules are observed, the notion of ministerial accountability to parliament and people becomes meaningless; and, worse, costly blunders will sooner or later come to be made. Si monumentum requiris…. 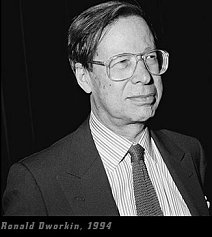 We should also treasure Professor Dworkin's concise and elegant demolition of the multiple heresies in Mr Blair's crude approach to human rights and their relationship to public safety and the proper response to risk. Perhaps his key points are summed up in these words:

…some injuries to individuals are so grave that they cannot be justified by declaring that that is what the public wants. A civilised society recognises rights precisely to protect individuals from these grave harms. It might well be in the public interest to lock up people who the police think dangerous even though they have committed no crime, or to censor people whose opinions are offensive or unwelcome, or to torture people who we believe have information about impending crimes. But we do not do that, at least in ordinary legal practice, because we insist that people have a right to a fair trial and free speech and not to be tortured. We insist on these rights even though the majority would be safer and more comfortable if we ignored them. Of course it is terrible when deluded terrorists or criminals on probation kill innocent people. But the increased risk that each of us runs is marginal when we insist on enforcing human rights rather than abandoning them just because they have proved inconvenient. It is one of Britain's most honoured traditions to accept the marginally increased risk as the price of respect for individual human dignity. That is what self-respect requires. It is dangerous gibberish to say that the public has a right to as much security as it can have; no one has a right to security purchased through injustice.

The 20th-century tyrannies have taught us that protecting the dignity of human beings, one by one, is worth the increased discomfort and risk that respecting human rights may cost the public at large. The Human Rights Act, which makes that convention part of Britain's own law, was one of the great achievements of this government. It is sad that Blair's political weakness has tempted him to rubbish ideals of which he and the country should be proud.

The concept that some risks have to be accepted in order to protect vital principles of justice, human rights and democracy in a civilised society has been badly damaged, perhaps terminally, by the ignorant ravings of the tabloids and the exploitation of the largely irrational fears of ordinary people.

The sadness is that a fundamentally well-meaning government has betrayed the decent and enlightened principles of its own party by failing to stand up to and expose these illiberal and self-interested pressures, preferring instead to pander to them and seek vainly to appease them. The new home secretary's declaration of war on his own hapless officials — a war which he can be by no means certain of winning — is but the latest example. The whole style and stance are designed to look and sound macho; Dworkin is right, though, to sum it up as "Blair's political weakness". All of us are paying a steep price for that weakness and the blunders that flow from it: but the steepest price of all is being paid each day by the people of Iraq.